Roufus on Punk: "I knew he wasn't quitting" 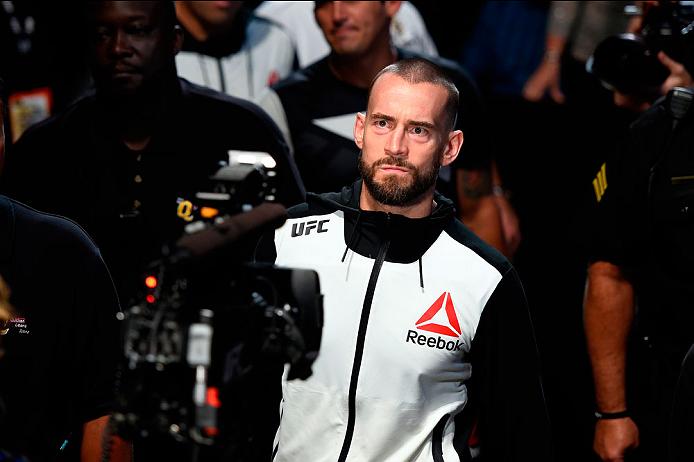 Following the blockbuster news of his signing and a lengthy build-up to his promotional debut, the former WWE superstar finally made his Octagon debut at UFC 203 in Cleveland against young hopeful Mickey Gall.

It lasted a little over two minutes and ended with Punk lumped up and tapped out, much to the delight of MMA diehards who strenuously objected to the interloper from the world of professional wrestling being granted the opportunity to compete inside the UFC cage.

While UFC President Dana White wasn’t sure if Punk would ever make his sophomore appearance, Roufus was sure that his famous new charge would be back in the gym, working on his craft, hungry to improve and make the most of his second chance, whenever it came.

“I knew that he would never run for the hills; that he was committed for the long haul of this whole thing,” said the highly respected Roufus, who had built a friendship with Punk long before the Chicagoan started chasing his UFC dreams. “That’s what made me so hungry to want to work with him because honestly, I wouldn’t necessarily wouldn’t do it with this type of situation.

“I remember his fight getting announced and thinking, ‘Ah cool – Punk’s gonna fight!’ Next thing I know he was like, ‘A long time ago, I told you that if I ever fought, I was going to train with you.’ I was like, ‘Holy crap – you’re serious?’”

Not only did the inquiry catch Roufus off-guard, but it surprised fight fans as well, as most anticipated the MMA neophyte would head to one of the larger gyms in the sport to prepare for this new adventure. Instead, Punk opted to stay close to his home in Chicago and become a part of the Roufusport team.

That’s where he’s been since his quick loss to Gall at the Quicken Loans Arena in Cleveland, working alongside the small, but talented group that trains under Roufus, including former lightweight champ Anthony Pettis, 155-pound contender Paul Felder and welterweight stalwart Belal Muhammad.

Where his first appearance was a major story and accompanied by cameras and interviews and a docu-series on FS1, the road to his sophomore appearance this weekend at UFC 225 in his hometown of Chicago has featured far less fanfare.

And yet nothing has changed for the man who started chasing a different dream after working his way to the top of the professional wrestling world through hard work, force of will and an unrelenting drive to prove himself to everyone that doubted him.

“There are certain things about people in life that make them successful no matter what they do, and the reason that he was successful from the indie ranks of wrestling all the way to now getting to the UFC is his serious, serious conviction and work ethic,” Roufus said of Punk, who faces fellow UFC sophomore Mike Jackson in the opening bout of Saturday’s Pay-Per-View main card. “I knew he wasn’t quitting and it has really fallen together for him and the timing of that has been magnificent.

“These last few weeks, it all started coming together for him. He’s really started getting the ‘sixth sense’ of fighting – the anticipation.”

As Punk readies to return to the cage, his coach points to two key events that have helped spur his fighter on heading into this weekend’s packed Pay-Per-View event: his loss to Gall and the culmination of the defamation lawsuit filed against Punk by WWE doctor Chris Amann that wrapped up this week.

“He had a case that he was dealing with this week and he won,” Roufus said regarding the legal proceedings, which ended with a not guilty verdict for Punk. “Needless to say, I see a chip on his shoulder, not that he didn’t have one coming in. Here’s a dude who felt misrepresented and it sucks to be perceived as one thing, but he had his day and everything is cool now.

“I also think it’s important for fighters to lose sometimes,” he added. “His happened right away, but losing equals reality.

“Coaching is a lot like having children: you see these things happen to fighters that you don’t want them to feel that, but you have to realize that there is growth from the mistakes and strength in the pain. When the people are realistic and want to accept the facts and look at things truly and clearly, you lost because you weren’t ready to win; those are the facts.”

According to his coach, Punk has been wholly accepting of his reality and working to make sure this weekend’s return to the Octagon produces a different result.

And Roufus has been encouraged by what he’s seen from the 39-year-old welterweight as he readies to face Jackson.

“I have so many different people I work with, but the one common thing about all of them is reality,” said the veteran coach. “We’re always facing reality in the lab every day and I commend Punk for accepting the facts all the time.

“He gets upset. He wants to be competitive with Belal, but that’s a different stature of fighter. Sparring with Anthony, Anthony actually noticed – he popped him with a body shot and Punk got a little pissy about it. You saw Punk stand up to him, start throwing down. Anthony was positively moved by it like, ‘He’s got the fire now! He’s a fighter!’

Even before they started working together on this venture, Roufus was sure Punk wouldn’t just up and quit if things didn’t work out the first time around.

Like it or not, you’ve got to give Punk credit for taking his lumps and coming back for more this weekend.