Rotterdam rewind: What you got right & wrong

Alistair Overeem put a stamp on his return home to the Netherlands on Sunday with a fierce TKO finish to put away Andrei Arlovski as he takes one more step towards a world title shot.

Overeem blasted Arlovski with a huge kick that clipped the former heavyweight champion just below the chin, and he followed it with a devastating punch that sent his opponent crashing to the canvas.

A few seconds later, Overeem was being pulled off Arlovski as the fight was stopped.

Overeem was one of the biggest favorites going into the card on Sunday, with 70 percent of fantasy players picking him to win, but the overwhelming odds at 89 percent picked him to win by knockout. Overeem proved a lot of people right with his latest performance, as he gets his fourth win in a row overall and another impressive knockout.

Heavyweights are known for fast finishes and Stefan Struve proved that theory correct once again when he dispatched Antonio "Bigfoot" Silva with a vicious series of elbows just 16 seconds into the first round of their co-main event matchup.

Struve brutalized Silva with an early uppercut before getting the finish on the ground with elbows. Struve was a 59 percent favorite according to fantasy players, with 44 percent of those going with him by knockout, and he came through in a big way.

Despite being the betting underdog going into the fight, Gunnar Nelson also did a masterful job getting Albert Tumenov to the mat once in the opening round and then again in round two to put on one of his best performances to date.

Nelson was suffocating on the mat, where he wrapped up a rear naked choke finish, and 63 percent of fantasy players picked him to win, 54 percent of players getting the call right for him to win by submission.

Both of the women's fights on the card featured lopsided favorites who proved players correct as Karolina Kowalkiewicz defeated Heather Jo Clark by decision with 85 percent odds on her side, while Germaine de Randamie also showcased her knockout power with her win over Anna Elmose. 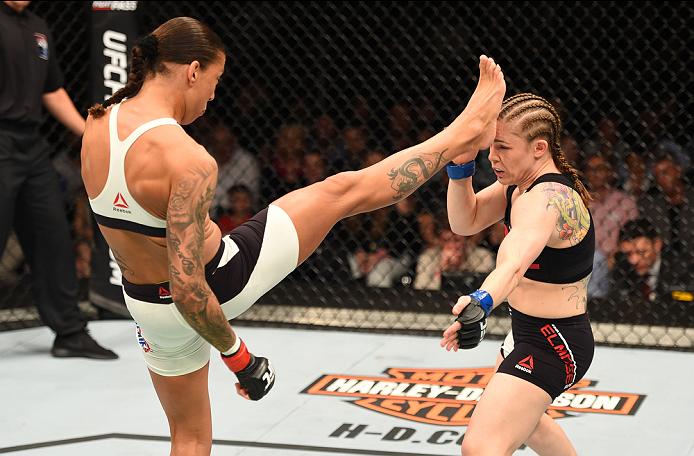 De Randamie was a 73 percent favorite, although 73 percent of the players picked her to win by decision, so those who had her getting the knockout added an even bigger score to their overall tally.

Quite possibly the savviest pick of the entire show happened in the matchup between Nikita Krylov and Francimar Barroso in a middleweight bout on the main card. Despite Barroso being a ground tactician and a Brazilian jiu-jitsu black belt, fantasy players had Krylov as a 76 percent favorite, with 36 percent of those going with him by submission.

Krylov proved those players correct as he scored a very impressive win over Barroso by rear naked choke for his fifth victory inside the Octagon.

The prelims proved to be full of upsets based on the picks made by most players going into Sunday's card.

Only 37 percent of players picked Magnus Cedenblad to get the job done against Garreth McLellan, but the Swede was ultra impressive with a second round TKO to pick up the victory. Debuting fighter Josh Emmett also pulled off a surprising win after accepting a fight with Jon Tuck on just a week's notice, as the Team Alpha Male newcomer earned a split decision on Sunday. Emmett was selected by only 27 percent of players, which made him one of the most lopsided upset picks all night.

The same could be said for Reza Madadi, who was only selected by 45 percent of players, but managed to finish Yan Cabral with a stunning third round TKO to get his first win in the Octagon since 2013.

Kyoji Horiguchi got the night started right for fantasy players with 84 percent picking him to win and another 57percent making the correct call that he would win by unanimous decision. Horiguchi was actually one of the biggest favorites on the entire card, and he pulled through with his win over Neil Seery.