Rothwell Gets the Fight He's Been Waiting for

Ben Rothwell knows a thing or two about the importance of the journey above destination. The 32-year-old veteran has spent the past 13 years carving out his place in the bigger picture of the heavyweight collective. 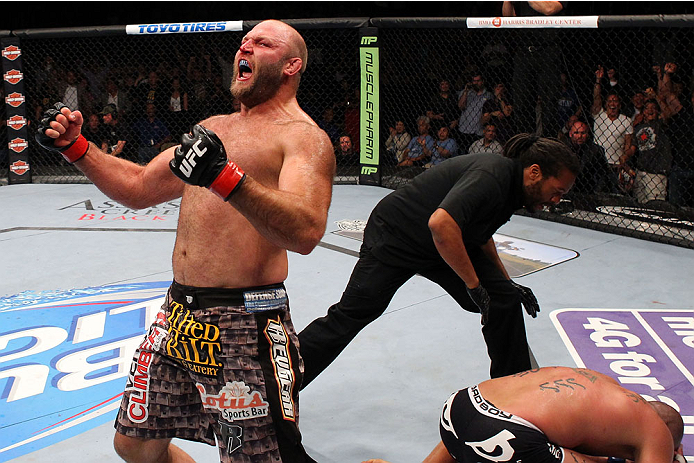 Ben Rothwell knows a thing or two about the importance of the journey above destination.

The 32-year-old veteran has spent the past 13 years carving out his place in the bigger picture of the heavyweight collective. While a large portion of that time was grinding out winning streaks and titles on various stages around the sport, the work that has filled the last five years of his career has taken place under the UFC banner. That’s where “Big Ben” knew he needed to be in order to achieve his ultimate goal of becoming the heavyweight champion, and he’s been scrapping his way up the divisional hierarchy since his debut back in 2009.

While the Kenosha, Wisconsin native was ultimately turned back during his inaugural showing inside the Octagon by future champion Cain Velasquez, the Thiago Veiga-trained fighter never second guessed he belonged under the UFC banner. He would go on to win three of his next five showings, including highlight reel-worthy finishes of Brendan Schaub and Brandon Vera, with the latter being one of his most impressive outings to date.

Rothwell came into his bout with the former two-divisional threat last August at UFC 164 with a point to prove. He had been bested via unanimous decision in his previous outing by Gabriel Gonzaga at UFC on FX: Belfort vs. Bisping and was eager to get his career back on track. Nine months had passed between his appearances, but the extended layoff didn’t stop him from getting the job done against “The Truth” that night in Milwaukee.

The two fighters engaged in a competitive affair throughout the first two rounds until Rothwell switched into an unknown gear and overwhelmed Vera with punches. His feet started shuffling, head bobbing and fists flying as Rothwell cranked up the heat to put the Team Alliance fighter away in memorable fashion.

“The Brazilians I train with call it the ‘Death Dance,” Rothwell described about his video game-esque combination to finish off Vera. “I do it in training and I get rolling on my feet and they always say that big guys aren’t supposed to move like that. I came out in the third round and could just see the fight was mine. I know I could have done it in the second round, but I really came into my own in that third round. It’s like I had finally become comfortable in there and the third round of that fight made it where I have officially spent one hour total inside that Octagon. I was able to calm myself and fight the way I train in the gym. I definitely want to do more of that.”

Yet, despite his victory in Milwaukeee, the Wisconsin-based fighter was forced to the sidelines in the immediate aftermath. Rothwell used his time away from the cage to heal up old injuries and set his sights on the fighter he wanted to trade leather with inside the Octagon. As it turns out, the gritty veteran had been calling out Alistair Overeem since 2012, and that was exactly the matchup he asked Joe Silva to line up.

While “The Reem” has a reputation for being one of the most feared strikers in the game, Rothwell believes the Dutch powerhouse will travel a different route when the Octagon door closes. He sees the former Strikeforce champion trying to throw him for a loop by abandoning his world-class striking skills, and attempting to work a grappling-heavy attack when things go live.

That said, Rothwell is certainly down to step in and figure things out as the two heavyweight juggernauts will square off at UFC Fight Night: Mousasi vs. Jacare this Friday in Mashantucket, Connecticut.

For Rothwell, it is a showdown two years in the making, and he has every intention of bringing the fight directly to the former K-1 champion.

“This is a fight I was actually asking for in 2012,” Rothwell said. “After I knocked out Brendan Schaub, Overeem is actually who I was calling out. That kind of went unnoticed, which was fine because I got paired up with Travis Browne. Then I hurt my ankle and went on the down slope because of injuries. Then I took a tough fight in Brazil and then took some off. I bounced back and got myself back together then came back to take on Vera. I ended up taking more time off - and in one turn I was very sad about how things went - but right now I’m very happy about how things went because it’s made me who I am right now and I’ve been asking for this fight with Overeem for over two years now. I finally got the fight and I’m really excited for this.

There is no doubt Overeem carries one of the highest profiles on the heavyweight landscape and a victory over “The Reem” would be a huge feather in the cap of the former IFL champion. That said, throughout his years handling business inside the cage, Rothwell has not only proven to be as consistent as they come, but he has also shown a penchant for rising to the occasion and embracing the underdog role.

He has pulled off shocking finishes in the past and a victory over the heavyweight wrecking machine would certainly put him firmly in the upper tier of an increasingly competitive division.