"The Brendan Schaub fight was finally just a small glimpse of what I can really do and how I want to fight and how exciting I want to be for the fans." - Ben Rothwell 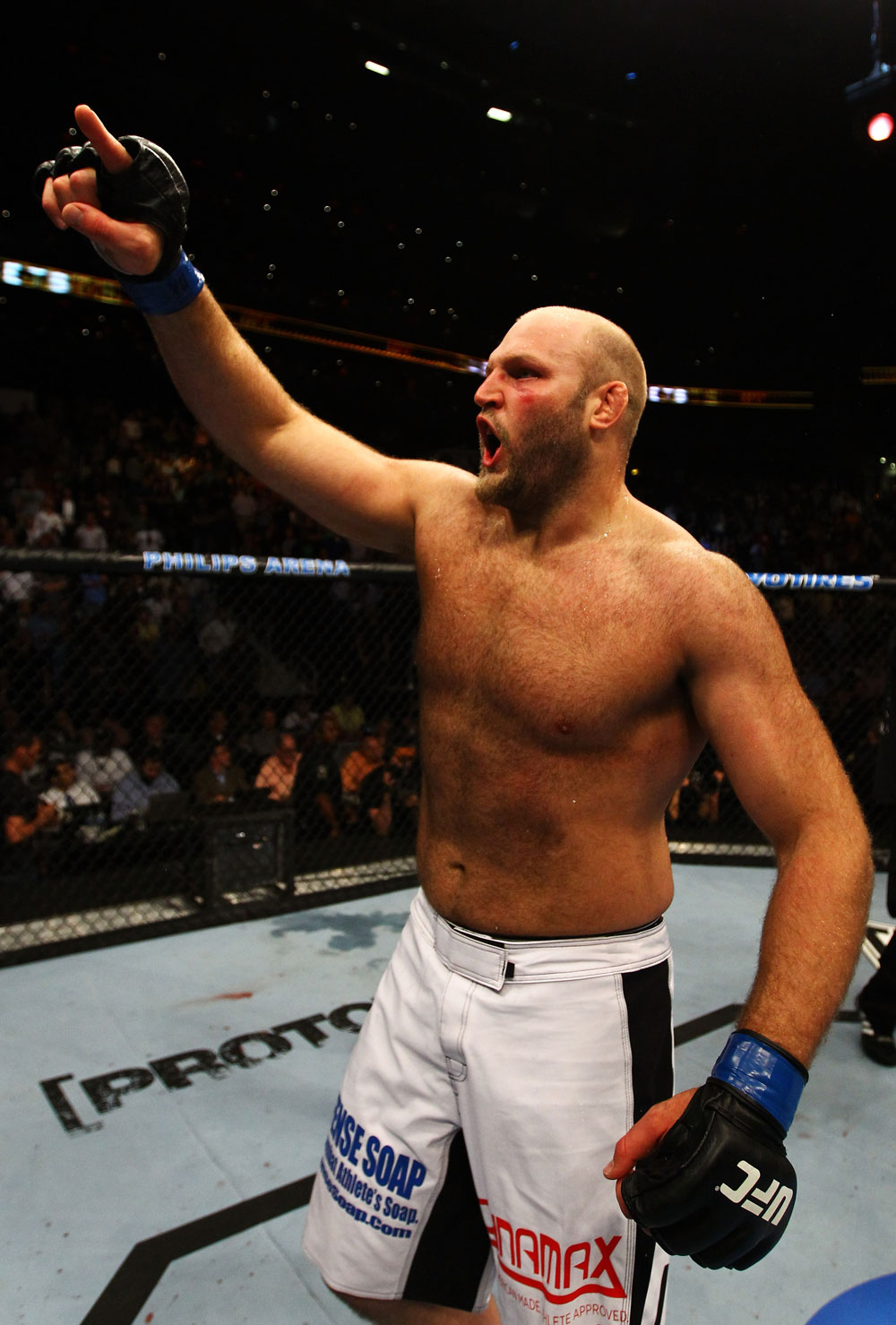 When George Foreman shocked the world in May of 1994, knocking out Michael Moorer to win the world heavyweight boxing title at the age of 45, HBO commentator Jim Lampley’s call of “It happened” got injected into the combat sports lexicon forever.

In April of 2012, nearly 18 years later, “It happened” for UFC heavyweight Ben Rothwell when he knocked out Brendan Schaub in the first round.

It wasn’t a championship bout, it wasn’t a history making occurrence, and it didn’t even shock those who have followed Rothwell’s lengthy MMA career. But finally, in his fourth UFC bout, the Wisconsin native delivered a performance he could smile about.

“The Brendan Schaub fight was finally just a small glimpse of what I can really do and how I want to fight and how exciting I want to be for the fans,” said Rothwell, now 2-2 in the UFC. “It’s just a small step in showing the world that I really believe in myself and how good I really am, and that’s the way it’s gotta be or I’m not gonna be happy.”

We’ve seen Rothwell unhappy, with the prime example being the aftermath of his UFC 115 win over Gilbert Yvel. Yes, win. But you wouldn’t have known that seeing Rothwell’s face after the three round decision victory.

“I’m a fan and I like to watch fights and be impressed and be excited, and I watch my fights the same way,” he explains. “Without even seeing the fight, I knew right away that people weren’t happy with the fight or it wasn’t as exciting a fight as it should have been, and that’s what I fight for (to have exciting fights).”

Rothwell, who debuted in the UFC in 2009 with a loss to future heavyweight champion Cain Velasquez, would drop his next bout in September of 2011 to Mark Hunt, but after surviving an arduous training camp and some early bombs from Schaub, he got back on track with a much needed win capped off by a Knockout of the Night bonus.

Next up was a summer bout with another rising star in Travis Browne, but as soon as Rothwell was about to start getting some momentum, an ankle injury forced him out of the fight.

“The problem is that I got too excited (after the Schaub fight) and the excitement caused me to show that my body’s not invincible,” said the 31-year-old. “I should have taken more of a rest because I had such a hard training camp and I basically came right out of that fight and went immediately into another training camp and right into an injury, so as good as I felt, I quickly didn’t feel as good just a few months later. It was rough. It was like taking a loss without even fighting.”

That’s Ben Rothwell. In a serious sport, not many take it as seriously as Rothwell. To him, getting to the UFC wasn’t just a perk of doing well on the local circuit; it was the goal he had set for himself years before. And once he got here, nothing less than a world championship would be acceptable, and every fight had to be one to remember. Is he hard on himself? Absolutely.

This Saturday night, Rothwell returns against former world title challenger Gabriel Gonzaga. It’s an intriguing fight between two top heavyweights and competitors who have been around the block a time or two, and while a win doesn’t mean immediate title contention, a loss could hurt those aspirations considerably. So given the stakes, Rothwell has kept his head down, trained hard, and he’s not about to do a lot of talking. He wants to save his energy for fight night in Sao Paulo, Brazil.

“That is where I’m at right now,” he said. “I’m not superstitious in the sense of worrying about black cats walking in front of me, but when it comes to fighting, I’m a bit superstitious, I guess, when it comes to the things that come out of your mouth and what you do in the ring. I have nothing to really say as far as strategy, or what I’m gonna do, or anything about the fight. I just have to do it in the ring, and that’s how I want to talk the best.”

And in a contrast to his younger days in the sport, Rothwell isn’t looking at this week’s visit to Brazil as an opportunity to take a mini-vacation. This one is strictly business.

“When I was younger and went to Brazil and Russia, I almost tried to make like a vacation / sightseeing tour out of it, but that gave me a lack of focus and it didn’t work out for me, so my rules have changed,” said Rothwell. “I’ve grown up and this is all business. I’m there to get my job done and get home, and then I can take a big breath of relief.”

Wise move, especially when you realize that his aforementioned trips to Brazil and Russia resulted in losses to Carlos Barreto and Ibragim Magomedov. Of course, those bouts took place back in 2002 (Magomedov) and 2003 (Barreto), almost a century ago in MMA years. Since then, Rothwell is 18-4 and an entirely different fighter than he was back then. And even with an all-business attitude heading into the Gonzaga bout, performing for the Brazilian fans is something he’s looking forward to.

“For me to go to Brazil, I’m trained by two Brazilians, so this isn’t USA vs. Brazil,” said Rothwell. “I respect Brazil very much, and obviously my two coaches have taught me very much and changed my life, so I have a lot of respect for them and I want to give the Brazilian fans a great fight and make some international fans as well.”

If he’s on when the bell rings, he will definitely leave Brazil with more followers than he entered the country with, and should he grab a win as well, the ‘potential’ tag he’s been saddled with all these years may start being fulfilled on the sport’s biggest stage. And he knows it.

“I’m on the brink,” said Rothwell. “I haven’t gotten to where I want to yet by no means. I’m trying to prove something to myself and it takes the actions inside the Octagon. I feel like I’m close, but I also have to put in my mind that this will all be for nothing if I don’t do it. So I have that on my shoulders for sure. You can throw a million punches, but on the night of the fight, that’s the time you’ve got to throw the right one.”

Rothwell threw the right one last April. On Saturday, he’ll look to have lightning strike twice.