"If this fight goes to a decision, it does nothing for me – I’ve got to finish this guy, I’ve got to look great, and I’ve got to scream out that I’m a Top 5 fighter wanting to go against the best guys in the world." - Ross Pearson 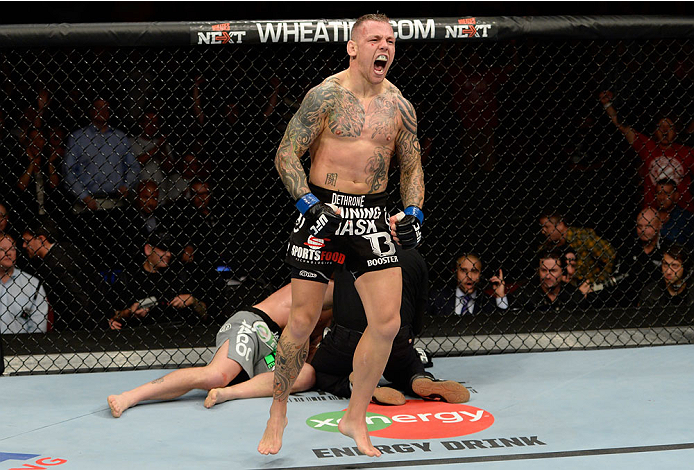 You can’t blame Ross Pearson for wanting to get back into the Octagon as soon as possible following his June matchup with Diego Sanchez.

After controlling the action with his movement and slick boxing over the duration of the three-round fight, the former Ultimate Fighter winner stood in the center of the Octagon, waiting to be announced as the winner. Instead, “The Real Deal” was handed a split decision loss, a verdict that was immediately panned across social media and left the Sunderland, England native with a sour taste in his mouth.

That’s why Pearson happily jumped at the opportunity to join the August 16 fight card in Bangor, Maine. Originally slated to face Abel Trujillo, a series of injuries and adjustments positioned Pearson opposite former title challenger Gray Maynard in the co-main event.

“I had come out of the Diego Sanchez fight unhurt – it was like I didn’t even have a fight,” Pearson says, explaining his decision to race back into action two months later. “I didn’t have any knocks or bruises and I was upset. I was pissed off. I wanted to get back in there and show the world what I could do.

Early in the second round, Pearson put a right hand on Maynard’s chin that stung his foe and started the finishing sequence. Another right connected, chased by a left hook, and Maynard collapsed along the cage. A flurry of short, quick rights followed and the fight was over.

Pearson let out a primal scream and embraced his coaches, happy with his performance and excited to move beyond the debacle from two months earlier.

“The Diego fight was off my back and a lot of people starting talking (about me),” Pearson, who pushed his record to 18-7, 1 NC with the victory over Maynard, admits. “I believe I beat Diego Sanchez. Nothing bad came from the Diego Sanchez fight apart from if you look on my record it says that I lost when it should have been a win.

“Now that it’s been a few months since the fight it’s actually laughable, but at the time I was questioning myself and what I can do. I just needed to get over that fight, get back on the horse and start knocking people out.”

Having moved on from the frustration of his bout in Albuquerque and added an impressive second-round stoppage win to his resume, Pearson is once again starting to gain momentum in the loaded lightweight division. This weekend, the 30-year-old Alliance MMA representative steps back into the Octagon against Long Island’s Al Iaquinta in the penultimate bout on Saturday’s UFC Fight Night: Rockhold vs. Bisping card at Allphones Arena in Sydney, Australia.

Though he’s originally from Sunderland and now resides in San Diego, Pearson is at home in Australia. He’s fought there twice before, picking up wins over Spencer Fisher and George Sotiropoulos, but more importantly, that first foray into the Octagon down under also allowed him to meet Octagon Girl Kristie Jane McKeon, whom he married in a beautiful ceremony in September.

“I’ve been on and off over here in Australia for the last four years, since I fought Spencer Fisher at UFC 127 where I met Kristie, who is now my wife. I just love being over here. The fans are amazing, the people are amazing and the love they show to the athletes and the sport is second to none.

A fellow Ultimate Fighter alum, Iaquinta rebounded from a second-round submission loss to Mitch Clarke in May with an impressive stoppage win over Rodrigo Damm in September. Representing the Serra-Longo Fight Team, the 27-year-old Wantagh, New York native is looking to make the jump to the next level in the deep lightweight division, but Pearson has no intentions of serving as a stepping stone.

Just as he envisioned the fight with Maynard as a chance to shift the discussion from his bout with Sanchez, Pearson sees this meeting with Iaquinta as an opportunity to show that he’s one of the top talents in the 155-pound ranks and capable of making a run at the title in 2015.

“If this fight goes to a decision, it does nothing for me – I’ve got to finish this guy, I’ve got to look great, and I’ve got to scream out that I’m a Top 5 fighter wanting to go against the best guys in the world. I’m prepared for the worst, but I expect the best and I won’t be happy unless I finish Al Iaquinta in impressive fashion.”