"I'm a hard fight for anyone. I'm never an easy fight, and he's got a
fight on his hands. If he wants to welcome me to the division, let him
welcome us." - Ross Pearson 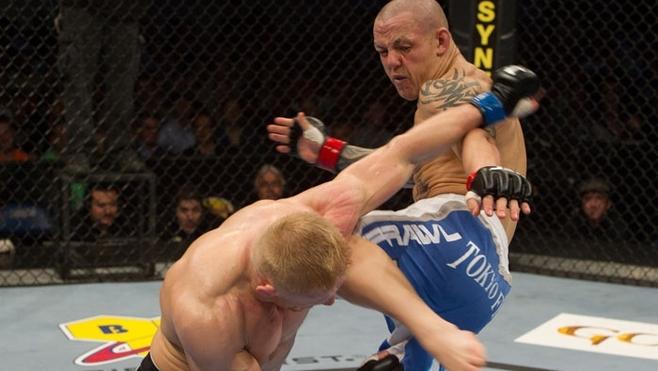 Add Ross Pearson's name to the growing list of competitors to change divisions after winning The Ultimate Fighter.

Two years and five fights after defeating countryman Andre Winner to claim the lightweight competition on Season nine of the UFC's long-running reality series, the 27-year-old Briton is poised to make his featherweight debut at UFC 141.

With the list of contenders in the lightweight division constantly expanding, Pearson made the decision to bring his talents to the shallower depths of the featherweight ranks. He approached the UFC with the news, eying this event for his 145-pound debut.

"I first started coming to Alliance (MMA) out here in San Diego at the beginning of the year, and I just see myself improving all the time, getting better and better, and I wanted to keep that going," explained Pearson of the request he made of UFC matchmakers Joe Silva and Sean Shelby. "I didn't want to stop it and have to start a whole program of getting better again, you know? I wanted to keep the momentum going. I didn't have any injuries from the fight (against Edson Barboza at UFC 134); yes, I had a few cuts and bruises and marks and stuff, but nothing really bad. I kept my fitness, I kept my strength, and I wanted to keep the momentum going."

Pearson wasn't the only one making requests of Silva and Shelby.

When the former bricklayer from Sunderland announced his intentions to change addresses, Junior Assuncao took to Twitter, asking for the opportunity to serve as the featherweight division's version of "The Welcome Wagon."

"If that's what he wanted, he's got his wish come true, you know?" laughed Pearson. "Not many people have asked for me as a fight. I always come to fight; I'm a hard fight for anyone. I'm never an easy fight, and he's got a fight on his hands. If he wants to welcome me to the division, let him welcome us. I'll be coming in to do my job.

"The things he's been saying on Twitter, I think he's the type of guy who needs to feel some animosity, some anger towards his opponent to get himself excited for his fights. If that's his area, that's what he likes to do, each to their own, you know what I mean?

"I'm totally different. It doesn't matter — I don't take anything personal. At the end of the day, we're going to fight each other, and it is what it is to me. I'm just excited to go in there, perform, show my skills in this division."

The excitement is evident in Pearson's speech, and it's easy to understand why.

He's not shifting weight classes because he can't compete at lightweight; Pearson went 4-2 in the division, with wins over veterans Aaron Riley and Spencer Fisher, and dangerous kickboxer Dennis Siver.

Though he lost his last bout at UFC 134, it was by the narrowest of margins, as Pearson and unbeaten prospect Edson Barboza paired up to capture Fight of the Night honors in Brazil.

For Pearson, this is the shortest road to the same destination every other fighter in the UFC is trying to reach — being crowned a champion. After a year of working with the outstanding team of coaches and athletes at Alliance, Pearson is confident he can make an instant impact in the featherweight division.

"Eric del Fierro is creating a monster. I'm the same fighter — I've got the same heart, the passion, desire — but he's fueling me with all these weapons, and he's making me faster and stronger. He's making a dangerous Ross Pearson, and it's going to be an exciting time in these next few years.

"My confidence is riding high right now. I feel like I've never been as well prepared for a fight. Normally, when I was back home in England and I was getting ready for fights, I was beating guys up in the gym — I was on fire; I was the best in the gym. Now that I'm out here, two weeks before the fight, I'm getting beat up. I'm getting beat down. I'm getting put in the worst positions. I'm getting submitted. I'm getting taken down and controlled. I have to work and fight in every position just to hold my own and do okay. It's been amazing.

"I've loved every minute of getting the chance to train with world champions in every aspect of fighting. When you're training with the level of guys that are out here, you've got to get good quick or you get beat up every day. It's exactly what I needed.

Not that he needs it, but Pearson draws extra motivation from this fight being the final live UFC bout on Spike TV. As fighter who broke into the organization on the network, he feels a certain responsibility to end the relationship in style next Friday night, and that's exactly what he plans on doing.

"What can you expect? I always say fireworks because that's the way I fight, but expect the unexpected — something you've never seen from me before.

"I'm looking to bring my whole MMA game to a whole new level. You're going to see a new me. It's a new division, it's a new me, and I'm pushing for big things in this division, so it's exciting times. I've got a point to prove, and I'm ready to showcase my new skills."