Ross Pearson - No Looking Back

"I still believe that I can be a champion after my last fight, and there’s only one thing that’s gonna prove that and it’s to get back out there and get back to winning." 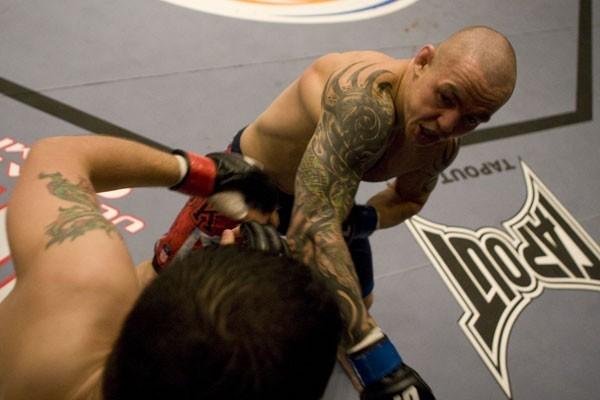 When the UFC rolled into Newcastle, England in January of 2008, one fan, a local bricklayer from Sunderland named Ross Pearson, was more interested than most.

At the time, Pearson was 3-2 as a pro mixed martial artist with only dreams of one day fighting in arenas alongside the best in the world. But those dreams were inching closer to reality.

“I remember when the UFC came to Newcastle and I was working on a building site right next to there,” said Pearson. “We went along to watch the weigh-ins and I stood outside trying to get tickets and I remember the feeling of hearing that BJ Penn was staying in the hotel right near where I lived. There was all this excitement about the UFC, and I was working on a building site. But it hit home that this was what I wanted to do and what I wanted to be.”

Following UFC 80, Pearson went on a tear, losing only one of several bouts and earning a spot on Team UK on the ninth season of The Ultimate Fighter. He won his weight class on the show, defeating teammate Andre Winner in the finals, and on June 20, 2009, Pearson was a UFC fighter. There would be no more bricklaying for him, and to this day, three UFC fights later, his dedication is sparked by the idea that he will never go back to his old day job. See videos of Pearson on TUF

“I feel blessed every day that I go to the gym and actually enjoy loving what I’m doing,” said the 26-year old. “It makes me a lot happier when I’m home and with my family because I’m succeeding and doing something with my life that I actually want to do. On days when you’re tired and really don’t want to go to the gym, or there’s something to moan about or twist about or really not get up for, I think back about all those years I spent dreaming of wanting to be in the UFC and wanting to be where I am, and I’ve got to keep going because this is just the beginning of where I want to be.”

After defeating Winner, Pearson impressed fans and pundits by blasting through veteran Aaron Riley in two rounds and then earning Fight of the Night honors in a decision win over Dennis Siver. The lightweight prospect was on the verge of making the leap to contender, but he would first have to dismiss Cole Miller impressively in their September 2010 bout. As Pearson explains, he was more than ready for the bout.

“It was a good camp, I was fit, I was strong, and the gameplan we had was a good gameplan.”

Then his knee decided to deviate from the plan. Tearing cartilage and chipping the bone, Pearson was suddenly considerably less than 100 percent against a fighter you don’t want to be in that condition against.

“I lost my range, my movement, and my timing had gone, and instead of thinking about how to win the fight, I was thinking about how I was going to survive the fight,” said Pearson, who didn’t even want to mention the injury post-fight because he didn’t want to take away from Miller’s second round submission win. “And against someone like Cole, who’s an aggressive, come forward fighter, once he smells blood, he finishes and you’re looking at a tough journey. And he did exactly what I would have done in that situation – he finished the fight when he saw his opportunity, and he did what he had to do.”

Pearson, his first UFC loss in hand, underwent surgery for the injury and then began the long wait to get back in action.

“I wanted to jump straight back into it and get right back into the cage as soon as I could,” he said. “But in the back of my mind, I’ve never been defeated like that before. It was a big shock and it was a hard feeling at the time. I didn’t like the feeling of getting beat like I did, but I’m past that now, I’ve overcome that, and I’m looking forward to moving on, and I think the best Ross Pearson is still to be shown. I’m looking forward to getting back in that cage and showing people what the real Ross Pearson is all about.”

This weekend, he gets his chance as he competes on the UFC 127 card against Spencer Fisher.

“It’s been quite a while,” said Pearson. “In the beginning of the camp, the waiting isn’t really too much of an issue; you’re just ready to get into camp and get fit, start sparring, and enjoy looking forward to the camp. But now, getting closer to the fight, the time’s starting to slow and I can’t wait to get in there and actually fight now.”

If you look at the styles of both lightweight standouts, a fight is what you can expect at the Acer Arena in Sydney, Australia. Both Pearson and Fisher are aggressive standup fighters who won’t have to look too far to find each other. When the bout was announced, the phrase “Fight of the Night” usually followed, but Pearson doesn’t feel any added pressure to perform.

“I don’t feel any added pressure with people saying that they think it’s gonna be Fight of the Night,” he said. “I don’t think Spencer will feel that either. Pretty much, stylistically, people who watch the fights on television and who look at each fighter and how each style gels, I think they’re right, it does have the makings to be a great fight. But at the end of the day, if I see a finish in the first minute of the fight, I’m gonna take it. I’m not gonna be there for overtime. If I can get out of there with a win in the first minute of the fight, then that’s what I’m going for. But if it takes the long road, I’ll take that as well to get the win.”

On a card where one of the most talked about matchups (Bisping vs. Rivera) is one with some serious bad blood brewing, Pearson and Fisher are two blue collar workers who fight as if they don’t like each other, but in reality share a mutual respect. And oddly enough, it’s a bout Pearson has expected from the moment he first set foot in the Octagon.

“I’ve always had a feeling with the guys in the gym and everyone else when the UFC approaches and they go ‘who do you think you’ll get next?’” said Pearson of fighting Fisher. “It’s been a couple times now that I’ve actually thought that Spencer Fisher would have been the name that I’ve got just because of the styles that we both have. So for a long time I’ve expected to fight him. I was very happy with the matchup, it’s the type of matchup and the type of fight that I’d like to have, and Spencer’s the same. He likes to get in there and just have a fight. There’s no bulls**t or anything about him. He’s just in there and he goes straight to work and he has a fight. Those are the fights I enjoy having.”

And the ones the fans enjoy seeing. But Pearson is far from one-dimensional in his attack, and in a quest to gain even more weapons, he’s traveled over the last couple years to train as well, even spending some time with lightweight champion Frankie Edgar in the lead-up to the Miller fight.

“I do go away and travel to train with different guys to improve and learn new tricks all the time,” he said. “And I also have the dedication, the drive, and the want to be where I want to be, and that’s the top. I still believe that I can be a champion after my last fight, and there’s only one thing that’s gonna prove that and it’s to get back out there and get back to winning. As far as my progression (as a fighter), it’s a lot of time spent in the gym, the traveling, and the want and the desire. You see guys like GSP (Georges St-Pierre) and Anderson Silva dominating guys, being classed as a legend and being so talented and skillful and I want a piece of that. I want to be that name, I want to be the top guy, but there’s a lot of hard work to get there.”

Yet the true secret may be that at his core, Pearson is still a diehard fan of the sport. That was evident when he was told that he was fighting on the same UFC 105 card as his fighting hero, Randy Couture, and he went scrambling for a poster to have the Hall of Famer sign for him. And he hasn’t lost that part of his personality.

“I’m a crazy fan myself,” he said. “I get excited before each UFC fight comes on and I still watch all of them. I watch so many fights that I pick up other guys’ stuff because I’m a fan and I try things out. I think that’s why I’m improving so much, because I still am a fan of the sport. I love going to the UFC events, I love cornering my teammates, and I just love it.”

So, just for argument’s sake, will he emulate fellow lightweight Anthony Pettis’ kick off the cage from last year’s WEC finale?

“If that’s what it takes to get the W for this fight, that’s what I’ll have to do,” he laughs, but Pearson really isn’t joking. He’s fought so hard to get here that he has no intention of leaving. He knows what it’s like to break your back on a construction site day in and day out, and to him, fighting is a much more agreeable profession.

“You’ve got to keep impressing, keep working hard, and keep winning to be in this business,” he said. “All the best guys in the world have that same dedication and drive, but I’m a little different because I’ve dedicated my life to this. Everything I do revolves around training and fighting for the UFC, and if I didn’t have this, I’d be back on a building site, which would mean the end of the world to me. It’s something I don’t even want to think about.”