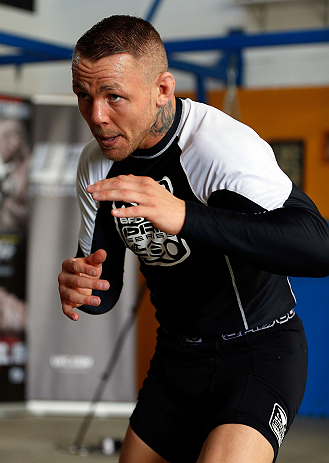 The Hulk's alter ego Bruce Banner may have first dibs on the “don’t make me angry, you wouldn’t like me when I’m angry” line, but Ross Pearson is about to put it into action for real Friday night (Saturday in Australia) when he meets his Ultimate Fighter: The Smashes coaching counterpart George Sotiropoulos in the main event of UFC on FX 6 on the Gold Coast of Australia.

“I’m feeling that energy to go in and put on a great performance,” said Pearson. “I think because it is a real fight to me and there’s bad blood between us, it’s only gonna make it a better fight for me. I fight better when I feel like it’s real. This could have happened anywhere, this could have happened off-camera, it could have happened anytime, and it’s real. This is a real fight and that’s when I shine. When I fought (Edson) Barboza in Brazil (in August of 2011), my back was against the wall against the best Brazilian up and comer, and I just went in there and fought. And that’s exactly what I plan to do against George when I go into his backyard.”

It’s probably not what you expected to hear out of “The Real Deal” when it was announced that he was going to be coaching against Sotiropoulos on the first season of TUF taped in Australia, but almost as soon as the Brit and the Aussie crossed paths, it got real heated real fast. And as the five rounder approaches, tensions haven’t eased much, if at all.

“We surprised a lot of people,” said Pearson. “I could say I was surprised a little bit by the way he approached things, and about the way he handled himself on the show. I was surprised of what kind of person he actually was. I never had any contact with George before, I’ve never had any relationship with him or anything, so I was going in there totally blind, just knowing what I’ve seen from him fighting in the UFC. So I was totally respectful. I knew George was a great opponent for me to fight and I gave him all the respect in the world. But the longer we spent with each other, the more I found out what the real George is like. The more we got under each other’s skin, the more we disliked each other, and yeah, sometimes it got a little bit crazy and a little bit heated.”

So what was the trigger that turned two of the most laid-back fighters into the UFC into bitter rivals over the course of six weeks?

“I think it’s that we’re completely opposite people,” said Pearson. “We’ve both got different outlooks on life and the way we approach things, and in the competition that we’re in, we both want to win and win for our countries, and that just raised the atmosphere and the tension to different heights.”

And as Pearson makes clear, this isn’t something contrived for the sake of ratings.

“I don’t hype a fight by talking s**t to sell a fight. I’m a guy that sells fights by going in there and fighting with my exciting style. But what I say about George is all true feelings. We don’t like each other and yeah, I’m going in there to hurt this guy.”

He’ll also be doing it back at 155 pounds after a featherweight experiment that saw him decision Junior Assuncao last December and then get stopped in the second round by Cub Swanson in June. It was before the Swanson fight that he realized where his true home was, weight wise.

“I honestly think it was while I was cutting weight for the Cub fight,” said Pearson, a TUF 9 winner who is 4-2 in the UFC at lightweight. “I just felt like I wasn’t enjoying it. I felt like it was too hard on my body and this is not what fighting’s all about. This is not what mixed martial arts, to me, is all about. And obviously when I watched the Cub fight back, I’ve taken way bigger shots than that and I’ve never gone down. I feel the whole experience when I fought Cub I was just taking too much out of my body and it just wasn’t working for me. That’s when I realized I had to go back to ’55.”

The division has changed a bit since Pearson last set foot in it, with Benson Henderson now ruling over the 155-pound kingdom after beating Frankie Edgar in February. But one thing that hasn’t changed is the level of talent at lightweight, and the way Pearson looks at it, no division can match it when it comes to top-level fighters.

“I still see the division as having the best depth pool of talent in any of the other divisions,” he said. “It’s a stacked division with a lot of good guys in all areas, and there are a lot of great fights out there that I can approach, and I match up well with any of them. I’m always willing to fight and always willing to put it on the line. I just want big fights, big names, big opponents, and it’s my time to push for that.”

It is a welcome return, as win or lose, the 28-year-old from Sunderland always delivers the type of action fights that fans love. And though he’s navigating his way through a rough patch career-wise, going 2-3 in his last five, Pearson’s return to TUF, this time as a coach (where he put three members of his team in the four final spots) gave him a boost and shown him just how far he’s come since joining the UFC in 2009. But he’s not through yet.

“When I was coaching the guys and seeing where they are, it only just reminded me of where I was a few years ago and where I am now, and to see how far I’ve progressed in this sport and seeing how far I can actually go,” he said. “Everything that I’ve done in this sport has gotten me this far, so I’ve worked on the things that will take me even further, and that’s just motivated me even more because I know how far I can go in this sport and the potential that I do have. It’s all about keeping momentum, staying fit and healthy, getting the right fights at the right time, and putting on the performances that I need to put on.”

Just don’t get him angry.