Ross Pearson Excited to Fight in the U.S. Again

"Diego is no joke. He’s as tough as they come. That’s why I’m excited about this fight." - Ross Pearson 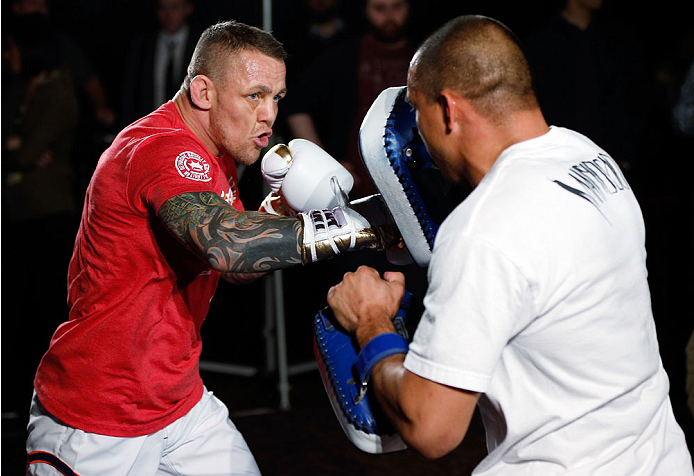 “This is not the way I wanted to go out,” said Ross Pearson after suffering a nasty cut to the forehead in the first round against Melvin Guilliard last October at UFC Fight Night in Manchester, England. “Me and Melvin were here to put on a show for you guys.”

This weekend, “The Real Deal” will get another chance to “put on a show” against one of Guillard’s former training partners, Diego “Nightmare” Sanchez, at UFC Fight Night: Henderson vs. Khabilov.

“I have been waiting for this fight my whole life,” says Pearson. “I’ve always said I’ve wanted to fight the best the UFC has to offer, and Diego Sanchez has been one of the best. He always turns up to fight, he always comes with the pressure, and coming into his hometown he will be fighting with even more urgency than he usually does.

Indeed, the TUF 9 winner from the UK will be in hostile territory in Albuquerque, New Mexico’s Tingley Coliseum. It’s a city where Sanchez grew up and has trained most of his career.

“In Manchester I had the crowd but this time around it’s going to be a bit different fighting in Diego’s hometown, but that will fuel me,” says Pearson.

With his blue collar work ethic, the former bricklayer from Sunderland, England has earned fans on both sides of the Atlantic with exciting fights that, as of late, have ended in knockout victories as in his last two against Ryan Couture and George Sotiropoulos.

“I feel like I’m in the prime of my career right now, and I’m really pushing to get that title,” he said. “I’ve been training with the best guys in the world, and I have an advantage in that I train on both sides of the pond, so in England I get some great boxing training with my Rough House guys who push me all the way, and here in the States I get the jiu-jitsu and the wrestling, so I am being tested on my feet, adapting to new training partners, and coming into these fights, I feel so well prepared. It’s just another day of work and I need to do what I do.”

Speaking of training partners, Pearson’s Instagram recently featured “The Real Deal” executing a left hook liver punch followed by a head kick, which knocked down his much larger opponent, and Ross thinks the video will help keep Sanchez guessing.

“I think Sanchez is going to be doing a lot of thinking on his feet in this fight, and I think he will have to try to take me down. I know I have the better striking game. I am on a much different level than he is in striking, and I will get off first. My hands, my knees, my feet are too good for him. He’s not going to be able to rush in on me like he does, because I think I beat him to the punch every time. I’m ready for everything Diego is going to bring.”

And while Pearson has been known to stand and bang, like Sanchez is wont to do, this time around, the Brit is instituting a no-brawling game plan.

At least on paper.

“I’m not going to go out there and see whose balls are bigger,” he said.  “I have taken my fight game up a lot by being smart out there and following my game plan. I’m an all-around mixed martial artist now. I’ve got good striking, good takedown defense, good jiu-jitsu and good wrestling now, and I can’t wait for you guys in the States to see that on Saturday night.”

Pearson has not fought in the United States in nearly two years, when he was stopped by Cub Swanson at UFC on FX: Maynard vs. Guida in Atlantic City, NJ, and he says he’s pumped for such a big opportunity to showcase his skills on national television once again.

“I haven’t fought here since 2012,” he said. “And to be a co-main event on FOX Sports 1, it’s such a huge chance for me to go out there and make a statement. I’m looking forward to showing the real Ross Pearson in a real fight, and being pushed to my limit by Diego.”

Though a win against Sanchez may not be as important as it once was when Sanchez was a number one contender in the lightweight division, the 32-year-old is certainly no slouch. And while Pearson’s teammate Myles Jury took a cautious approach and outpointed Sanchez in March, Sanchez put on a Fight of the Year type performance against former Strikeforce champion and number one contender Gilbert Melendez in October.

“Oh yeah, Diego is no joke,” says Pearson. “He’s as tough as they come. That’s why I’m excited about this fight. That’s why I trained hard for the past three months, and that’s why I’m going to give it my all in Albuquerque. It’s going to be a great fight, for sure.”