"I’m coming into my own and I’m on form right now." - Ross Pearson 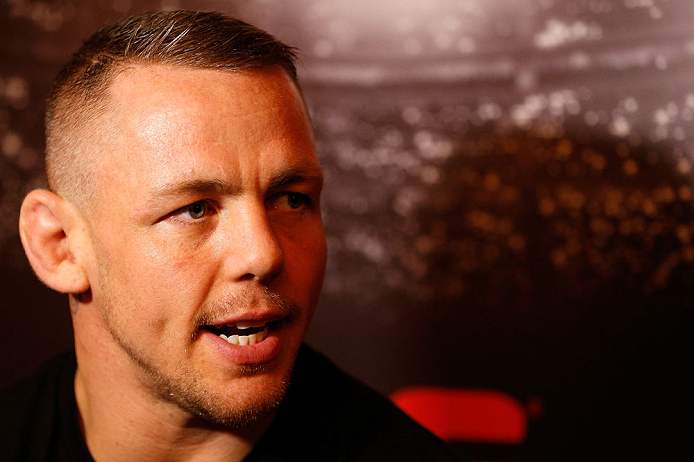 Ross Pearson has been in the fight game long enough to know that at this level of the sport, wins and losses are part of the gig. But entering his December bout with his Ultimate Fighter: The Smashes coaching rival George Sotiropoulos, Pearson knew one thing: he could lose a hundred fights, but he couldn’t lose this one.

“Yeah, definitely,” said Pearson. “That was a fight that whatever he brought to the table, I was beating him. Whatever he brought to me, I was making him pay. It was one of them fights I said that out of a million fights, that was the one where there was no other option apart from finishing him and winning.”

Pearson got both options down, beating Sotiropoulos by third round TKO. With the exception of some brief trouble when he got caught in a choke, Pearson looked better than he had in a long time, something he owes to his return to the lightweight division after a two fight stint at featherweight.

“I felt great,” he said of the camp leading up to the bout. “I felt like the old me getting ready for a fight. I went through a big lifting phase, a big strength phase, and then I went through power and endurance, and obviously conditioning in the last few weeks. It’s what I had always been used to when I fought at 155, and fighting at 145 I couldn’t do that. (At featherweight) Pretty much the whole camp is all based around conditioning and my weight. And it just wasn’t me. It didn’t fit my style and it was just too much on my body. When it came down to fight time, I wasn’t successfully hydrated, and I wasn’t one hundred percent me. And if you fight in the UFC, it’s hard enough being a hundred percent, let alone being less than that.”

Winning his first bout at 145 by decisioning Junior Assuncao in December of 2011, Pearson got shot back down to Earth in his next bout, as Cub Swanson stopped him in two rounds last June. It was a disappointing result, but he got good news soon after when he was approached to coach Team UK against Sotiropoulos’ Team Australia on the first edition of The Smashes.

Yet what was expected to be a fairly low-key affair turned into something completely different, as Pearson and Sotiropoulos clashed almost immediately, leading to a bad blood battle that Pearson admits he enjoyed.

“I kinda liked it, to be honest with you,” he said. “I liked the atmosphere, the pressure, the whole deal leading up to that fight. It was a long time in the making. All in all it was like eight months with filming and training, and it was a long time to actually get to fight. Now it’s different going back to just a competition and an everyday fight. I do like that little bit of animosity and anger going into a fight. I can’t explain why I like it, or what it does to me, but I do.”

Sadly, Pearson had to be informed that his opponent in the UFC on FUEL TV 9 co-main event, Ryan Couture, isn’t likely to be the trash talking type. Pearson laughs, and he’s cool with that, but he will find his motivation to ball his fists and swing them at Couture one way or another.

“I am totally cool and totally fine with Ryan,” said Pearson. “He never said anything or did anything to me, and I have no reason to hate this guy. I have nothing but good words to say about Ryan, but having said that, he has to fight me, and I’m gonna use that energy of him wanting to come to the UFC and wanting to make a bold statement out of me, and I’m not gonna let that happen. I’ve got to feel like Ryan’s trying to take something from me.”

Couture is certainly looking to do that, as a win over a name lightweight like Pearson will get the UFC career of the son of Randy Couture off to a spectacular start. At the same time, Pearson knows the value of the Couture name better than most, having been a huge fan of the Hall of Famer he shared the bill with at UFC 105 in 2009. And despite his admiration for the father, he has no issues fighting the son.

“Absolutely not, it’s not weird whatsoever,” said Pearson. “I would fight Randy and I’d be honored to fight him. When I fought at UFC 105, my first real fight in the UFC, I could only dream of being on an event of Pearson vs. Couture, and now that’s about to happen. It’s caught quite a lot of people’s attention and it sounds good. People on the street ask who I’m fighting and I say Couture and they go ‘no s**t, Randy Couture??’ (Laughs) And I’m like, no, it’s his son. But it’s exciting, and I like the sound of it.”

What he likes the sound of even more is Bruce Buffer announcing his name as the winner after a tough fight. And from the looks of things, the rejuvenated Pearson is on track for a lot more moments like that in his second stint as a lightweight.

“I’m coming into my own and I’m on form right now,” he said. “I’m kinda like in a rhythm, I’m training well, my weight’s good, and everything seems to be going right, so I just want to put on good performances.”