Rosi Sexton: The Doctor is In

"A fight is a fight. At the end of the day, you’re in the Octagon and it’s you and the other person across the cage from you, and that’s your world." - Rosi Sexton 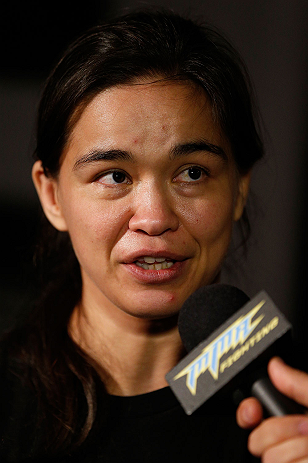 Before Matt Hughes, Carlos Newton and the rest of the UFC 38 crew introduced England to mixed martial arts’ premier organization in July of 2002, there was Rosi Sexton, who had just made her pro debut two months earlier, submitting Angela Boyce in the third round of their bout.

In terms of context, let’s consider that during that time, MMA, especially in Europe, was considered something men shouldn’t even be allowed to partake in, let alone women. But Manchester’s Sexton was never interested in living by the status quo or letting other people dictate what she wanted to do, so with ten years of training in martial arts already under her belt (two in MMA), she decided to test her skills somewhere outside of the gym. Not that it was going to be easy.

“It was all over the place,” she laughed. “It was the Wild West. I think there were only a small number of people who really knew what mixed martial arts was, and it was still the whole no holds barred, cagefighting, and all that stuff, which obviously we’ve moved away from over the years. But when I started back in 2002, there was almost no women’s mixed martial arts in the UK.”

Sexton did hear of a scheduled match though, one where an opponent was needed. She contacted the promoter but was told the opening was already filled. 24 hours before the fight, she got a call.

“Back then, you never knew when there was going to be another opportunity. I thought If I don’t fight now, there might not be another chance.”

She won, submitting Boyce, and then picked up another fight and another win two months later. That would be about it in terms of keeping a busy schedule, because after a March 2003 fight, she wouldn’t see action until nearly a year later. Bout number five didn’t come until November of 2005, prompting the decision that she needed to take her show on the road.

“Those first few years I was struggling to find opponents and struggling to find shows that wanted to put female fights on,” she said. “That was back in the days when people were arguing whether women should really be allowed to fight. It seems crazy looking back now.”

By 2006, the men’s side of MMA had started making major inroads to mainstream fans thanks to the first season of The Ultimate Fighter. With more acceptance and more shows, the women’s side of the sport began to grow, and an early pick to be the next big thing was a Muay Thai kickboxer named Gina Carano. That was Rosi Sexton’s first fight out of the UK.

“That was back in the day when I was young and stupid,” recalled the five-foot-three, 125 pounder, who was giving up some serious size advantages facing Carano, a fighter who competed at 145 pounds in her prime days in EliteXC and Strikeforce. Their fight, on September 15, 2006, was signed at 135 pounds but later altered to a catchweight of 139. Sexton looks back and chuckles.

“At the time, I didn’t fully appreciate the whole weight cutting thing. I knew that people dropped weight for a fight; I didn’t know quite how much a lot of people were dropping. This was back when I was relatively inexperienced, and it was my first international fight. I was coming up to 135 and I weighed 135 after eating a big lunch with my clothes on. (Laughs) I could have probably made 125 that same day without any stress at all.”

That night, Sexton was knocked out in the second round. She wouldn’t lose again until a defeat at the hands of Zoila Frausto Gurgel in June of 2010. Surrounding that loss have been eight wins over quality foes such as Carina Damm, Debi Purcell, and Roxanne Modafferi, and in the process Sexton established herself as an ambassador for the sport and a pioneer in the UK, as well as a go to person for those in the media wishing to learn more about the sport. That’s not surprising given that in addition to her fighting prowess, she graduated from Cambridge University with a Mathematics degree, holds a PhD in Theoretical Computer Science, and also earned a degree in Osteopathy, the latter of which she actively practices back home in England. Oh yeah, she’s a Brazilian Jiu-Jitsu brown belt and a mother as well.

“I spend actually quite a lot of time talking to people in the media, trying to explain what the sport’s about and trying to put the sport in a good light and a realistic light,” she said. “As far as the women’s side of the sport goes, in a way, people over here in the UK and in Europe tend to be reasonably accepting of women’s sports in general. There’s a tradition of women in combat sports, whether that’s judo or Muay Thai, and it’s something that’s been going on since before I started mixed martial arts. And I think once there had been a few good fights and people saw these skilled athletes, it’s no different than two men fighting. It’s the same sport, we’re doing the same thing, and from then on a lot of people within the mixed martial arts community were fairly receptive to it. One of the biggest struggles was finding opponents because there was a relatively small pool of fighters. Obviously that’s growing now, especially over the last few years.”

If it sounds like Sexton emerged from those rough professional beginnings to find a comfortable place in her life, that would probably be accurate. The Cage Warriors promotion in England kept her busy when she wanted to fight, and things were good. Sure, she wasn’t likely to ever see the inside of the UFC Octagon, but that was okay.

Enter Ronda Rousey. And once “Rowdy” Ronda took over the world of MMA and opened the door for a women’s division in the UFC, everything changed for fighters like Sexton.

“All of a sudden, things took off with the Rousey-(Liz) Carmouche fight earlier this year, and from there on, things have moved much faster than I think anyone expected them to,” said the 35-year-old. “It was after that fight I had a conversation with my coach (Paul Rimmer) and I hadn’t really given it (fighting in the UFC) much thought up until then. Previously I had been fighting at 125 pounds and I knew 135 pounds was the UFC division. But we had a chat about it and we decided it was much too good an opportunity not to give it our best shot. So I had a chat with my manager (Graham Boylan), who worked his usual magic, and here we are, and I’m very grateful for the opportunity.”

On Saturday, Rosi Sexton makes her UFC debut, facing Alexis Davis on the main card of UFC 161 in Winnipeg. It’s a meeting between the first female representatives from the UK and Canada to compete in the Octagon, a responsibility Sexton takes very seriously.

“I’m very privileged to be the first UK woman to have the opportunity to fight in the UFC, but I believe I’m going to be the first of many,” she said. “I just got here a little bit before some of the others. In a sense, it’s an incredible responsibility. I want to help the next generation to succeed on this same level. I want to further the women’s side of the sport here in the UK and help those girls have the opportunities I’ve had. I think I’ve been very fortunate in that I’ve had a lot of good people around me who’ve helped me out to get me to where I want to be. And I have a responsibility to pass that on to the next generation.”

But first there’s some business to be taken care of with Davis, one of the best bantamweights on the planet.

“Alexis is a tough fight,” said Sexton. “She’s legitimately one of the best wrestlers in the division, a very legitimate Brazilian Jiu-Jitsu black belt, and her striking has been getting better and better over the last few fights, so we know going into this that this is going to be a tough fight for me. But at the same time, I think I’ve got the tools to give Alexis some problems as well, and it will be interesting to see how our games match up.”

It will also be interesting to see how Sexton reacts to seeing something once considered nothing more than a distant dream become a reality. That can be overwhelming for some, but given what she’s accomplished thus far in sports and in life, don’t expect her to be taken away by the moment.

“I think as far as the fight goes, the way I want to deal with it and the way I know I deal with it best is just to focus on the person in front of me,” she said. “A fight is a fight. At the end of the day, you’re in the Octagon and it’s you and the other person across the cage from you, and that’s your world.”

And few know that world better than Dr. Rosi Sexton.