"I've never fought in Manchester before. To do this on a UFC card and
having never thought I would fight for them before, that is going to be
an amazing experience." - Rosi Sexton 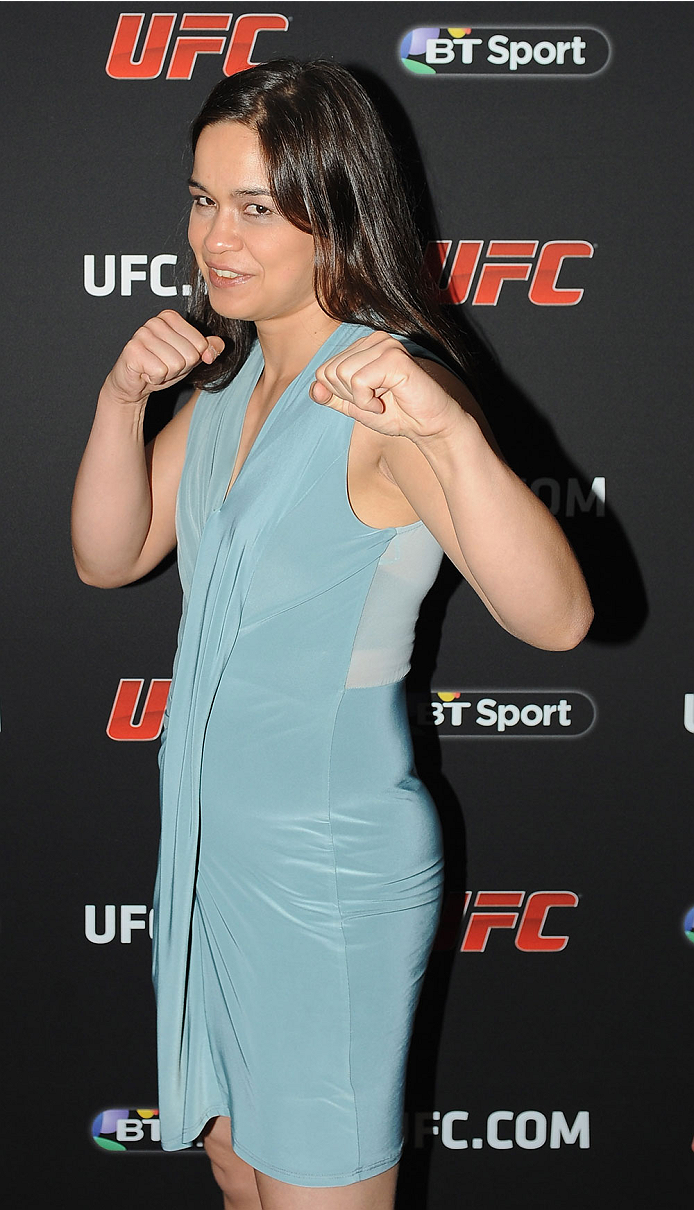 Nothing against Michael Bisping, but he doesn’t have a PhD.

And The Ultimate Fighter 3 winner shouldn’t feel too bad about it because no one else in the UFC has one or ever had one minus Bisping’s fellow Mancunian: women’s bantamweight Rosi “The Surgeon” Sexton.

Home is where the heart is, or where one fights out of, or where their doctorate is from, is how the famous saying goes. While Bisping’s injury absence from Saturday’s main event is lamentable, the local English Octagon enthusiasts attending the upcoming UFC Fight Night should know they still have one of their own to root for in Sexton, who is more than ready and able to deliver a slugfest as the hometown hero. In fact, she’s been waiting her entire globetrotting 11-year career for this occasion, as this will be Sexton’s first bout in Manchester.

“This really is a dream come true,” states Sexton. “This will actually be the first time in my career that I've fought in my hometown. I've never fought in Manchester before. To do this on a UFC card and having never thought I would fight for them before, that is going to be an amazing experience. To be honest, I'm really just looking forward to this one. The last one, there were a lot of nerves and anxiety and I wasn't quite sure what to expect. For this one, I just can't wait to get in there and show what I can do.”

The 35-year-old, who was born in Versailles and raised and educated in Britain, made her much-awaited UFC debut in June at UFC 161 against the Canadian favorite Alexis Davis. Obviously, it was a surreal experience for Sexton to compete in the Octagon after fighting for and in numerous countries and companies since her first pro bout in 2002, and she had all but given up hope scrapping for the UFC. The scorecards read a unanimous decision for Davis, which really doesn’t reflect how razor-thin close the bout was nor how much success “The Surgeon” had in the tangle with the #6 ranked Davis.

“Overall, I'm pleased with how I did,” affirms Sexton. “The result was obviously not the one I was hoping for, but there were aspects of my performance that I was certainly proud of. I think I did show that I can certainly be competitive with some of the top ranked 135-pound competitors fighting in the world. Alexis Davis is right up there. Before that fight in all the interviews with Alexis Davis, no one was talking to her about me. They were talking to her about [UFC women’s bantamweight champion] Ronda Rousey and how she was being built up to be the next big challenger for Ronda Rousey. I think people were largely overlooking me entirely. I think the fight being as close as it was, I think that made a statement. One of the things I said in the lead-up to that fight was if she thinks I'm a stepping stone then she's going to get a wake-up call. I stand by that. I think that's absolutely what happened.”

Easily the toughest known Osteopath or doctorate owner in Theoretical Computer Science, the 13-3 Sexton - who had recently been competing as a flyweight - bullied the larger Davis around and stuffed all of her takedown attempts. “I'm actually quite strong for my size,” says the 5’4” Sexton, who pretty much walks around at the division’s weight limit. Like a female equivalent to former UFC lightweight champ Frankie Edgar, “The Surgeon” believes that her lack of a weight cut helps her push the pace from pillar to post against these bigger opponents. With one fight and two training camps under her belt, Sexton feels more accustomed to 135 pounds and expects to perform even better in this Manchester melee.

“I think going into this fight, I feel more comfortable at the weight than I did last time,” tells Sexton. “I think you will definitely see me as a more solid bantamweight than the last time out. I've had a bit more time to work on strength and conditioning to really consolidate the weight that I put on for the last fight. I'm feeling a lot sharper at the weight. When I initially put on the weight, I felt sluggish, a bit slow, and not quite as sharp as I had been at the lower weight class. Now, I'm getting that back again. I'm bigger, I'm stronger, and I'm getting that sharpness back again. I'm looking forward to really showing what I can do at this weight class.”

Up next for Sexton is a showdown in her hometown this Saturday against Brazilian wunderkind Jessica “Bate Estaca” Andrade. At a newly-minted 22 years old with a 9-3 pro record, Andrade is an exciting proven finisher with all of her wins coming via knockout (4) or submission (5). The prospect from Paraná Vale Tudo made her UFC debut on short notice, filling in for top-ranked Miesha Tate against the former #1 contender Liz Carmouche in July. While the underdog Andrade lost to Carmouche, she showed a tremendous amount of fighting spirit in the face of stiff competition, which has worked well for her in the past and caught the UFC’s attention.

“The first thing I notice about her is how young she is,” laughs Sexton. “I've actually been training martial arts since before she was born, which is interesting. I had my first pro MMA fight back when she was in junior school (laughs). It's a real youth vs. experience matchup, I suppose. I consider myself one of the original generation of women’s MMA fighters. I've pretty much been in the sport since women's MMA existed. In terms of style, she's got some good grappling. She's got powerful striking as well. I don't particularly want to be on the end of that. We're both on the smaller end of the weight class and have a similar build and a similar style, I suppose. Jessica certainly has the tools to be a threat. She's dangerous. I'm going to have to bring my A game. I think I'm a bit superior everywhere. I'm a bit more experienced, my technique’s a bit sharper, and I think that's going to be the deciding factor.”

In preparation for the attack on Andrade, “The Surgeon” is training only a stone’s throw away in Liverpool at Next Generation. Sticking with the formula that brought her here, Sexton has trained with the same team for her last four fights. Undefeated amateur and an alum from this season’s The Ultimate Fighter, Laura Howarth lived and trained with Sexton for this camp. Generally regarded as a jiu-jitsu fighter because of her seven sub stoppages and black belt from The Jiu-Jitsu Foundation, Sexton has worked her MMA grappling over the years to become more focused on blunt force and control.

“I think these days, I would consider myself more of a wrestler,” asserts Sexton. “I think that partially has to do with the gym I train at because they have quite a strong wrestling base. It's something that we've worked on for the last few years. If you look at the way I tend to fight, it's a lot more takedowns, top position, and ground and pound, rather than just a submission game. That's obviously still there, but I think my game has evolved more towards a very top-heavy type of style.”

On October 26th at UFC Fight Night in Manchester, women will war as Andrade and Sexton collide in an effort to land their first win inside the Octagon. “I think if you look at Jessica's style and my style, I think you're going to see a lot of aggression,” argues Sexton, who is, so far, the smartest person fight fans have seen lace up a pair of gloves to trade knuckle sandwiches in the UFC, and she’s even more driven to do it again in her hometown. “I think you're going to see a really fast-paced fight. I think it's going to be really competitive. But I see myself coming out on top.”

And, she should know because she’s a doctor.