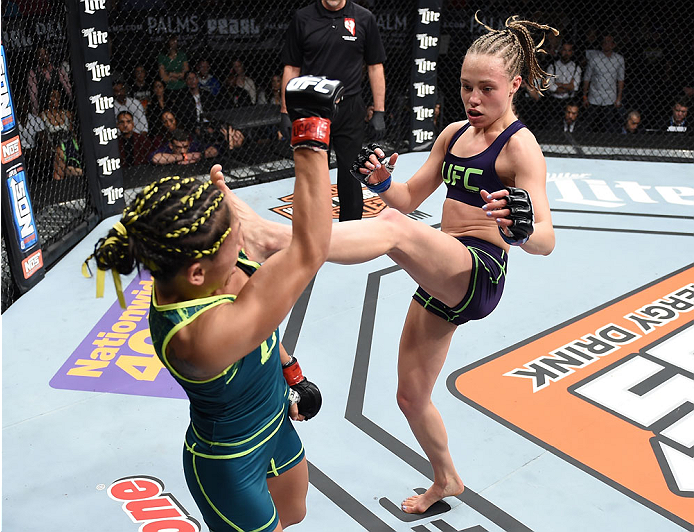 A stirring three-fight run through the field on season 20 of The Ultimate Fighter last year established Rose Namajunas as a strawweight fighter with uncommon talent. Yet after falling short of championship gold in the series final against Carla Esparza, what the Milwaukee native has displayed even more impressively is uncommon honesty.

In the fight game, that’s rare. So rare that you need to mention it when it crosses your path, and when the 22-year-old discusses the most disappointing night of her professional career, there’s no machine gun spray of blame being fired everywhere but in her direction, only the realization that in this business, everything begins and ends with the one who has gloves on.

“It’s nobody’s fault but mine,” she said of her third-round submission loss to Esparza. “I woke up that day not feeling like I’m the hottest thing since sliced bread. Deep down inside I knew ‘I’m not feeling it today, I don’t want to be here.’”

Leading up to the fight, forget sliced bread; “Thug Rose” was the hottest thing since pizza when it comes to MMA prospects. Young, charismatic and a terror on fight night, Namajunas was routinely described as the next Ronda Rousey more often than not leading up to the TUF 20 final, which also doubled as the first women’s strawweight title fight in UFC history. It was a coronation before the fight even began, and while the veteran Esparza noticed every bit of it and used it as fuel, Namajunas avoided paying attention to the hype, not by choice, because she had no choice.

“Leading up to it, I really didn’t feel it because I didn’t have time to feel it,” she said. “I was constantly doing something, whether it was training or traveling to do interviews and stuff like that, so I didn’t really have time to compartmentalize it, but obviously I didn’t deal with it too well the night of.”

She laughs, but early on, it looked like she would live up to all expectations as she roared out of her corner guns blazing. That wasn’t the game plan though.

“I feel like I was losing the entire time, and it’s weird because when you’re inside your own head fighting, a lot of times it looks totally different on the outside than what you’re actually feeling,” Namajunas explains. “When you’re dominant and you know you’re dominant, it definitely feels that way, but a lot of times you have these self-doubts. I knew there were a lot of red flags that popped up throughout the whole training camp, but you just have to ignore them and push forward no matter what. I want to show up on fight day whether I’m ready or not. But in that moment, I just wanted it to be over with. I felt that the intensity that I had, even though it might have looked like I was very confident and throwing whatever, that was a very panicky Rose out there. It wasn’t the ‘cool, calm and collected, I know what I’m doing, I have a strategic step for every move and I have my legs underneath me.’ It was a very immature, impatient, ‘let’s just get this over with, I’m so tired.’”

After the first round, Namajunas was spent physically, and when her corner told her that she may have lost that round, everything else went out the window as well.

“It definitely killed my confidence even more,” she said. “So going out for the second round, I had everything going against me in my head. I don’t think the intentions were to make me lose my confidence even more, but my coaches were striving for perfection and they might have seen me going out a little bit wild and carelessly. I reacted to it in a totally different way. I was already thinking ‘that was everything I had and I still lost that round? Well, what’s the point?’ And all the excuses were tumbling down upon me and I cracked. Mentally, I broke. There were definitely some physical things that could have been better, but a lot of it was mental.”

You can’t get more honest and real than that, and that honesty may eventually be the intangible that makes Namajunas a champion one day, as she’s already realized that while fighters can lie to the world to make them seem invincible, you can’t lie to yourself. And with only five pro fights to her name, it’s a valuable lesson to learn this early. Add that to her talent level and work ethic, and days like December 12 (the date of the Esparza fight) may very well be a thing of the past.

“It was something that had to happen at that moment,” she said. “I’m really young and I’m not as experienced as a lot of these other girls that I’m competing with. But at this point now, I wouldn’t say that I’m not as inexperienced anymore, because I did have a title fight. So whether or not I won or lost, I have that experience under my belt and I learned a lot from it, so I feel like I have that to my advantage.”

This Saturday, Namajunas returns to the Octagon to face Nina Ansaroff, and the spotlight isn’t as bright as it was a few months ago, something she’s enjoying.

“It’s definitely different than fighting for the title and coming off the show, and it’s a pressure that I’m embracing a lot better,” she said. And while hindsight is always 20/20, how does she think she would have handled being champion if she did pull out the win over Esparza?

“Judging how beneficial that loss was for me at that critical point, I would say that I would have handled being a champion very terribly as opposed to what I’m going to handle it like now when I get back up there and get that belt,” she said. “I feel like I’m going to have so much more knowledge and so much more maturity. So it (not becoming champion) was a blessing in disguise. I’m glad that it’s going to happen later versus when it would have and when I thought it would have been better for me. But I’m just happy that I’m in the position that I’m in now.”

The official position Namajunas sits in is at number four in the 115-pound rankings. That’s not a bad place to be in and one that could put her back in a championship fight with a couple wins. She’s not calling out anyone at the top or looking for a title shot after Saturday night, but her goal remains unchanged.

“I look at everything the same way,” she said. “Obviously I envisioned myself being the champ and reigning for a thousand years (Laughs), but in reality, things are different, and ever since climbing up the ranks before getting to this point, I always thought the belt was going to bounce around. I’m still looking at it the same way, but it’s very competitive and everybody’s got something to show and everybody’s trying to get that belt.”

Including Ms. Namajunas, who starts the second stage of her UFC career this weekend.

“I definitely made a lot of changes over the past few months that you’re going to have up to 15 minutes to see, so tune in and hopefully you’ll get a glimpse of what my life has been like and all the changes that I’ve been through,” she said. “It’s gonna be a good one.”