Rose Namajunas Is Focused On Knowing Herself

At this point, Rose Namajunas is a bit of an expert on rematches. When she faces Zhang Weili at UFC 268 in Madison Square Garden, it’ll be her third rematch in six fights and fourth overall. In those fights, she is undefeated. The fight is also her fifth championship bout in that span.

With that in mind, the always-thoughtful Namajunas is reflective when thinking about what a second crack at an opponent affords her as she prepares for Zhang for a second time.

Catch Another Rose Rematch At UFC 268

“It’s all about knowing yourself,” Namajunas told UFC.com. “I think every fight, but especially rematches, it’s really easy to get caught up in ‘Oh, this last time…’ It’s always a new day, it’s always a new fight, and you should be putting the past behind you, staying in the present, and knowing yourself and getting better where you need to get better. Paying attention to little tendencies and observing, but not being emotionally attached to the things that you’ve observed."

Frankly, there wasn’t much to observe in her first fight against Zhang. A little more than a minute into their highly anticipated fight at UFC 261, Namajunas connected with a left high kick that sent Zhang crashing to the canvas. A few moments later, the fight was over, and Namajunas had done it again – she was the strawweight champion of the world. 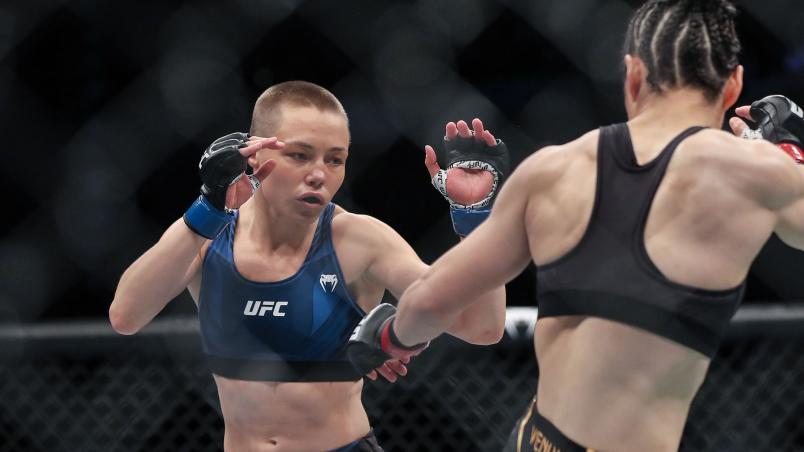 The moment had shades of her first title-fight victory in which she famously dropped Joanna Jedrzejczyk in a shocking upset at UFC 217, right down to the emotional Octagon interview. Now, of course, the moment isn’t as shocking, but it remains impressive. Namajunas has been open with how the weight of the belt impacted her afterward, especially in the aftermath of losing her belt to Jéssica Andrade at UFC 237. So, when she got the belt wrapped around her waist once again in Jacksonville, Namajunas carried it with a better understanding of herself and what to expect in her second reign as champion.

“There’s been similar emotions maybe that have come around,” she said. “I think my ability to address those and deal with them - I have the experience with it, so I think the main difference is just knowing why I’m feeling the certain things that I’m feeling and knowing how to combat those things. Or embrace those things and nourish them based on if they’re good or bad emotions.”

She is not only improving her mental approach to the sport but has also spent the time sharpening her skill set, which is already lauded as one of the most beautiful to watch in the sport. Namajunas said it is “powerful” when self-belief meets knowledge of one’s self, and so she has taken the time between fights to understand herself on a deeper level.

That understanding includes breaking down how she has created those iconic moments in the Octagon.

“I’m a natural finisher, but I’m working on being more intentional with it,” she said. “Kind of reverse engineering the finish and the steps that get us to that. Corner people, walk them into it and control every aspect of the fight. From the little flinches or the look in your eyes, whatever it is. Intentionally doing everything I normally do really well. I’m always working on every aspect of the game.”

When UFC.com visited her in Colorado, the environment inside Trevor Wittman’s ONX Sports gym was exactly as observant and introspective as Namajunas details. Along with her fiancée and coach Pat Barry, the three of them hone in on ways to optimize Namajunas’ technical abilities with a better awareness of how the champion is able to pull off the spectacular with such ease.

Given her aesthetically pleasing and tangibly devastating striking, it’s easy to forget Namajunas made most of her bones early in the sport as a submission ace. Five of her first six professional wins came via submission, as well as all three of her victories when she competed on The Ultimate Fighter in 2014.

As she puts it, she is focused on “one-upping everything,” and that includes her lifestyle outside of training. She said her diet was “really good” before her last fight, and so that is another aspect to “Thug Rose” that is getting sharpened. This holistic approach is part of why she continues to find success against familiar opponents.

“I’m very honest with myself so I think the advantage I have in rematches is that I’m able to put my ego aside,” she said. “I know where I put it if I need it in a tough situation, but when I’m analyzing and gameplanning and things like that, I try to be as emotionless and objective as possible. I think that’s where I have the advantage. I’m trying to get to the truth of everything, and with fighting, that’s where I learn about myself the most and that’s what I love about it.”

Namajunas’ fight against Zhang is also going to be her second in Madison Square Garden (the aforementioned upset of Jedrzejczyk being the first). It’s an arena prone to the spectacular and, combined with Namajunas’ own natural tendencies for the same, it’s a mixture almost certain to deliver exactly that. Although it’s usually a little difficult to build anticipation for a rematch between fighters whose first fight lasted less than 90 seconds, the mystery of what the two colliding forces will produce is still there.

Namajunas keeps her own anticipations close to the chest, but she does feel free to remind everyone what she reminded herself in the moments before the first fight – that she’s the best.