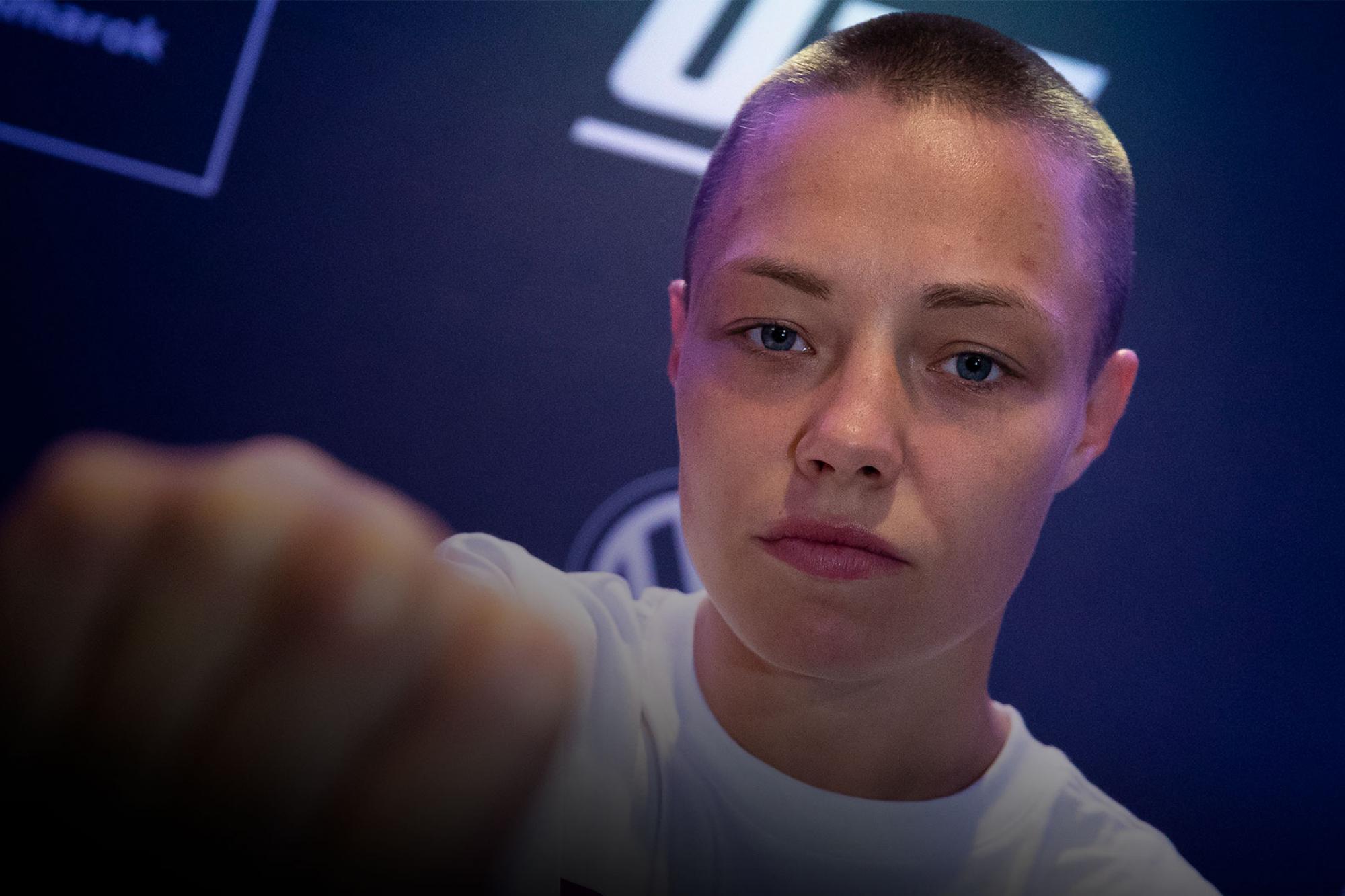 After the coronavirus claimed members of Rose Namajunas' family, she planned to only fight on home soil during the pandemic. Later that all would change.
By Thomas Gerbasi, on Twitter: @TGerbasi • Jul. 8, 2020

Rose Namajunas was going to fight again. She just didn’t know when or where.

A UFC 249 bout against Jessica Andrade in Brooklyn would have been perfect, especially considering that the two biggest wins of her career over Joanna Jedrzejczyk took place in New York. But COVID-19 shut down the Big Apple.

Then the UFC 249 card got shifted to Las Vegas, but when the coronavirus claimed members of her family, Namajunas withdrew from the bout.

The former strawweight champion stayed in contact with the UFC, and while the idea of Fight Island was becoming a reality, she preferred to stay on home soil and that was apparently what the two sides agreed on until Namajunas picked up her Bible and came upon a passage in the Gospel of John.

“As long as it is day, we must do the works of him who sent me. Night is coming, when no one can work.”

“When I read that, it gave me goosebumps because that's pretty much what's going on right now,” she said. “Everything is opening back up, quarantine is slowing down, and then I got the opportunity to fight on Fight Island, whereas if I waited until Vegas, who knows what's gonna happen. Maybe that's when no man can work and when night comes. So I didn't want to wait. I just figured, f**k it, let's go to Fight Island.”

From quoting Jesus to “f**k it, let’s go to Fight Island” in the space of 30 seconds. If you were wondering why Namajunas is one of the most compelling figures in the fight game today, wonder no longer. It’s why fans have been waiting with bated breath for Namajunas to return after the loss of her title to Andrade in May 2019, and why they were concerned that maybe she had thrown her last punch in the Octagon back in Brazil.

But “Thug Rose” isn’t going anywhere. Not yet at least.

“I've basically given myself a time frame to accomplish more in my career,” she said. “I gave myself until I turn 30 to keep fighting, and it's just what I love to do. It’s one of the many things I love to do, so I definitely go through periods of hating it and I think I'm in the phase of loving it again. (Laughs) It's just cool to win a fight and to take all the training and work that you've put in and put it into practice and see it happen in front of your eyes. Ultimately, I think it makes me a better person, makes me more focused and disciplined, and there are so many things I can list, but basically, it's what I love to do.”

A quick look at the calendar before the panic sets in, and you realize that somehow, someway, the Milwaukee native is still only 28 years old. It’s an amazing fact considering the resume she has already put together in a pro MMA career that began in 2013. The two wins over Jedrzejczyk, previous victories over Michelle Waterson, Tecia Torres, Paige VanZant and Angela Hill, not to mention a 3-0 run on The Ultimate Fighter 20 that saw her defeat Alex Chambers, Joanne Calderwood and Randa Markos. Win or lose on Saturday, Namajunas’s status as one of the best strawweights ever is secure.

But there is Saturday night, and what happens on Fight Island will determine where she goes from here. Did the emphatic slam knockout at the hands of Andrade stay embedded in her psyche, or is she able to look back at the first round she had against the Brazilian as a sign of things to come at UFC 251?

“Of course, nobody wants to lose,” said Namajunas. “But I learned a lot from that (fight). I went through some different phases, pointing a finger everywhere else and then realizing that I was in control a lot of it and I f**ked up. And I took that responsibility and did something about it and was still kind of holding on to it in a weird and different way. At the point where I'm at now, I'm emotionally healed from all of that and yeah, it was embarrassing at the moment, but now it's just a thing of the past.”

In fact, when catching up to Namajunas at training camp in her adopted home state of Colorado, the focus was on the future, not the past, and she sounded as ready to go as ever.

“I’m doing really good, getting muscles,” she laughed. The only thing she hasn’t done over these unprecedented times is get down to the business of writing her book.

“I haven't written one page,” she said. “I love writing in my journal, so I've been keeping a journal this whole time, so maybe I'm just accumulating notes for later. I still think I'm in the middle of my book and living it daily. I gotta live out some more chapters first.”

The next chapter begins a nearly 24-hour trip away on Yas Island. And as heated as the first bout between Namajunas and Andrade was inside the Octagon, outside of it, there’s been nothing but class from both combatants for as long as they’ve been linked together for a pair of sanctioned fistfights. Then again, that’s always been the style for Andrade and Namajunas, who leave the fighting for fight night.

“If it wasn't truly genuine in my character then that would be difficult because I'd be acting, but it's really what's honestly in my heart,” Namajunas said. “I don't have to think about anything because I'm not making s**t up. I wear my emotions on my sleeve, I say how I feel and then I deal with the consequences. But at least I don't have a heavy heart because I'm trying to put on a front or act.”

There may be no more honest sport than one in which two athletes face each other in combat with no teammates to help them and only a referee to save them. No one is more acutely aware of this reality than Rose Namajunas, who also knows how much of a trip it is for people to reconcile that the young lady who plays Chopin with the skill of a master is the same one who will be punching Jessica Andrade in the face in a few days. So don’t be surprised that she can whip off Bible quotes and move right into her desire to go and compete on Fight Island.

“It makes sense to me,” she laughs.

And that’s all that matters.