Rose Namajunas: Fighting is the Priority 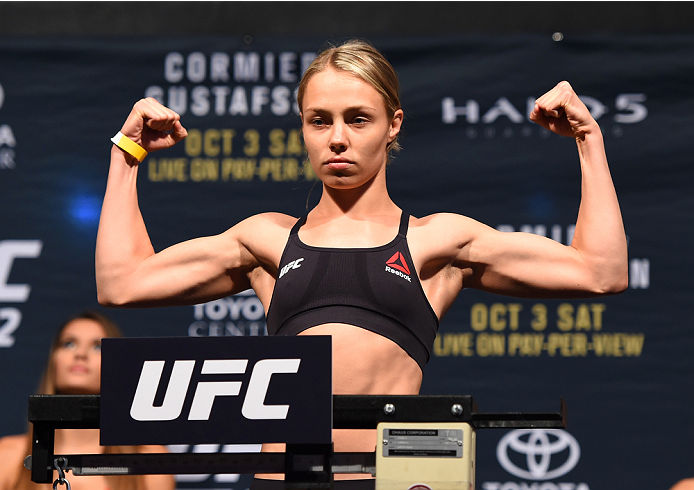 Just when you thought you’ve seen it all in the fight game, Rose Namajunas got a haircut.

And for a little while, at least in MMA circles, it broke the internet.

But while there was the idea that Namajunas shaved her head to make a statement to her upcoming opponent Paige VanZant, she of the golden locks, that wasn’t exactly the case.

“Man, I was just sick of it,” Namajunas laughs. “I don’t know how much time I’ve wasted, stopping between rounds saying ‘hold on, I’ve got to fix my hair.’ I’m always damaging it in wrestling and I’ve got to pull out a clump of it when I wash it after practice. It’s just a big nuisance. And if I’m a fighter, why do I have it? To look good in pictures? And if hair is the thing that makes me pretty, that’s a lot of maintenance to just be pretty.

“And once I did cut off my hair, it actually gave me more confidence because I was able to see my face,” she continues. “My hair was just a thing in the way, almost like a distraction from my confidence. It’s really empowering for me as well, so I just got rid of it.”

It does bring up an interesting point though. If Conor McGregor shaved his head, would it cause such a stir? Yeah, probably, since anything “The Notorious” one does causes a stir. But any other male fighter taking a trip to the barber wouldn’t garner the headlines Namajunas did. A double standard? Absolutely. And it's one “Thug Rose” is fighting against.

“As a female fighter, I think we tend to put more pressure on ourselves,” she said. “Society expects women to be pretty and play that certain role, but I think we put that pressure on ourselves as well as female fighters, especially if we’re what society considers attractive. We have that pressure to use that to our advantage, but for me, that’s only going to help you in other avenues. I want to get as many advantages in fighting itself. I don’t want to spread myself too thin.”

So was this a statement all along?

“There was a lot of backlash for Paige, and people took it out of context, as if that was a slam on her,” she said. “It’s not like that. But I do feel like it is somewhat of a statement. Why not do it to keep the focus on the fight so I don’t have to worry about training, then rinsing off and washing my hair, then drying it off, making it all pretty, doing my makeup, then getting ready for interviews and pictures and then having to go back to training and putting it back up. I just want to focus on the fight and figuratively and literally cut out as much as I can.”

The timing is perfect – for the statement and the fight. Fresh from her first UFC win over Angela Hill in October, Namajunas got the call to face off with strawweight sensation VanZant in the main event of the December 10 UFC FIGHT PASS card at The Chelsea at The Cosmopolitan Las Vegas, and despite the short notice, she took the fight after a little contemplation. Very little.

“It wasn’t a typical, full eight-week training camp that most people do,” she said. “But for me, there wasn’t too much hesitation. I checked everything out – is it the right opponent, is it the right date, am I ready for the main event once again? And I said yes to everything once I thought it over for like 30 seconds.”

She laughs, at ease before what some would call the biggest fight of her career. But the 23-year-old has already been down that “biggest fight of her career” road. In December of 2014, she finished up her stint on season 20 of The Ultimate Fighter by fighting Carla Esparza for the UFC’s first women’s strawweight title. In the lead-up, the Milwaukee native was compared to Ronda Rousey, and in terms of attention, it’s almost like she was VanZant before VanZant ascended into the public’s consciousness this year.

Namajunas would lose to Esparza via third-round submission, but the lessons she learned both before and during the fight were invaluable. That education was evident in her first-round finish of TUF 20 cast mate Hill.

“It was very satisfying in the sense that I worked really hard and I just had to be really patient,” she said. “But afterwards I kind of realized that I’m right where I need to be. I’m not feeling anxious, like ‘whew, got that one past me.’ It’s just the next step and I’m always staying present. Obviously sometimes I do get a little bit ahead of myself and sometimes I even focus on the past a little bit. But I’ve got to stay present. I enjoyed every bit of that fight. The lead-up, the training, even the celebration of it afterwards. But I really didn’t think too much further other than I just want to get home to my dog and that’s it. (Laughs) And move on to the next thing.”

That next thing could send the number three-ranked Namajunas into the title picture at 115 pounds while also putting her in the spotlight once more. The first part she’s cool with; the second will still take some getting used to.

“There’s definitely a lot to gain from this fight, and I think every girl in this division wants to fight Paige because of that, but I’m not too concerned about the spotlight,” she said. “I have nervous feelings about being famous. (Laughs) That creeps me out, the fact that I can go to the store and somebody knows me while I’m grocery shopping and they want to talk to me. That’s weird. I’ve always been kind of a loner, so I’m not in a rush to be plastered all over billboards. It’s kind of fun, but it is disturbing too. (Laughs) So I’m not concerned with gaining what she’s got, but that’s fine. I’ve been there done that, and it’s a lot. To me, it’s more about what can I do to be a better fighter and as I take those right steps, those things that are gonna come will come when I’m ready. I’m in no rush, but I feel like I can handle it better now being a more mature person and having more experience with that too.”

But as we’ll find out next week, the secret weapon for Namajunas remains her head. Not what’s on the outside, but the inside.

“Mental strength is everything,” she said. “Everybody’s physically gifted at the highest level. And even when there are some people who maybe aren’t necessarily as physically talented as the rest, they just outwork people. So keeping my emotions in check is everything for me and I think that’s with every fighter. If you can kind of decode how to get to the root of people’s mentality, that’s where you win the fight. What are they gonna try to do to me that’s gonna make me quit? And once you figure that out and figure out how to make the other person quit, that’s how you win every fight.”