Rory MacDonald - "The Waterboy" Grows Up

“I’ll have one thing in mind the whole time, and that’s looking across the cage and fighting Nate Diaz, and nothing else.” - Rory MacDonald 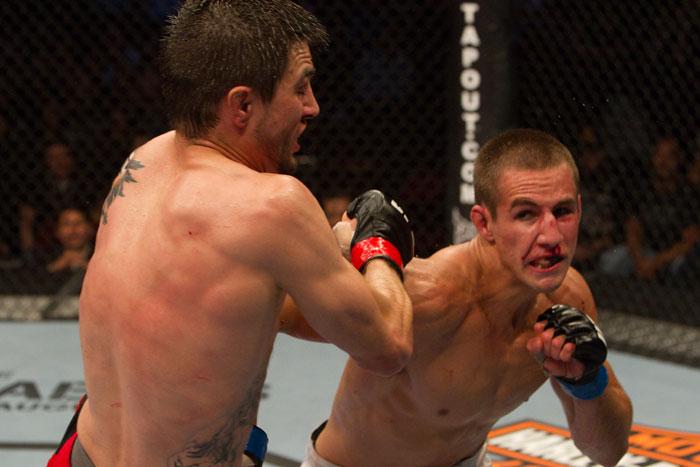 Seven seconds. Ahead on two of the three judges’ scorecards in his UFC 115 bout against Carlos Condit last June, that’s all Rory MacDonald needed to walk away with the biggest victory of his career against a former WEC champion.

But as referee Kevin Dornan pulled Condit off the soon to be 21 year old after a barrage of punishing blows, a stunning victory morphed into a crushing defeat. Seven seconds remained in the third and final round, and even an enormous amount of respect from his opponent, the media, and the fans, and a post-fight bonus check for participating in the Fight of the Night couldn’t soothe him.

Even today, nearly a year removed from the bout, he looks back and calls the aftermath “a dark time”, but the one thing he won’t do is make excuses or wish that the Dornan gave him those seven precious seconds.

“Absolutely not.” said MacDonald. “I don’t think that whatsoever. Carlos did a great job in the last round and he did a lot of damage, more damage than I did to him in the whole fight. So he deserves the win he got. I wasn’t put away, but the referee stepped in for my safety, which I appreciate. But I wasn’t gonna give up.”

That grit and determination may be the lasting image of the bout, even more than Condit’s come from behind victory. In 10 previous pro bouts, including a UFC debut win over Mike Guymon in January of 2010, MacDonald was barely tested as he lived up to all the hype he received as the top prospect to come out of Canada since current welterweight champion Georges St-Pierre. And if you wanted to call him a future Michael Jordan of MMA, few batted an eye at such a lofty proclamation.

But without the Detroit Pistons to teach them the unwritten rules of championship level basketball, perhaps Jordan and his Chicago Bulls don’t go on to win multiple NBA titles. Without Matt Hughes armbarring him in their first fight, maybe St-Pierre doesn’t go on to greatness at 170 pounds. And without Carlos Condit, Rory MacDonald may not have the intangibles he now possesses today.

“Everyone was right about saying that experience was gonna play a factor, because it really did,” said MacDonald. “He outsmarted me in the last round. I came out guns blazing, trying to be exciting, and I’m always gonna be that exciting fighter, but I learned how to be smarter now. Before, it was all action, like a race to the finish, and I made some crucial mistakes in the last round, and it was hard for me to deal with because it set me back in my career. I was really thinking that that was my time, but in the end, it’s a blessing in disguise. I was hurt by it at first, but I’m coming back much stronger and much smarter.”

And more dangerous. Now MacDonald knows that he can push past fatigue against a world-class opponent and still battle on with the heart every fighter hopes he has, but doesn’t know if he possesses until it’s tested. And though only 21, his reaction to the loss wasn’t one of ‘okay, it was just a bad day at the office.’ It hit him harder than anything Condit threw at him, proving once again that in his chest beats the heart of a fighter.

“I took a little bit of time away because it was a hard loss for me, but I’m okay now, I’ve come a long way since then, I had a knee surgery, so I’ve had a lot of time to work on my game with my new team out here in Montreal, so I’m very excited to come back.”

This Saturday night, MacDonald returns to the Octagon to face fellow rising star Nate Diaz on the UFC 129 card in Toronto’s Rogers Centre. It’s a bout that has Fight of the Night written all over it, and one that is pivotal for both fighters since they’re looking to rebound from recent defeats. So to get ready, the British Columbia native made the trek to Quebec to train with the gang at the Tristar Gym. To hang with that group, which includes fellow 129 participants GSP, Ivan Menjivar, Sean Pierson, John Makdessi, and Yves Jabouin, you have to be on top of your game at all time, and being around some of the accomplished veterans that call the gym home has done wonders for MacDonald’s game in and out of the Octagon.

“I talk with the more experienced guys a lot to help me with decisions I have to make in my career,” he said. “They give me advice as to what I need to look out for, what to look forward to, how to handle certain situations and advice to handle myself in the ring too. It’s an extra bonus, not just to be able to train with these guys, but the things they can teach me outside.”

Diaz has the same kind of squad behind him back home in California, but while the two share similarities when it comes to youth, talent, and quality teammates, the kid from Stockton is never afraid to up the ante when it comes to gamesmanship both before and during a fight. But the quiet MacDonald insists that he isn’t going to play along.

“I don’t really see myself getting very hot-headed about it,” he said. “This is what we do for a living, and it makes no difference to me if he says something to me before or if he doesn’t. There’s no emotion at all for me. Some people need emotion to hurt other people and get themselves in the right frame of mind for the fight, but if he does, it’s all on his own behalf. I’m not gonna have anything to do with that.”

That poker-faced approach is going to play into MacDonald’s performance in the Octagon as well, as he admits that his homecoming fight in British Columbia against Condit overwhelmed him a bit in terms of bringing that emotion of being home into the fight.

“I was real psyched up and emotional (against Condit), but it’s not gonna play into the fight this time,” he said. “I’ll have one thing in mind the whole time, and that’s looking across the cage and fighting Nate Diaz, and nothing else.”

Diaz will have the same mindset, just another reason why this fight is a must-see. And if you need any more proof, just rewind a bit to April 9th and watch Nate’s brother Nick do his thing in defending his Strikeforce welterweight title against Paul Daley. It was vintage Diaz style fighting, and Nate is a virtual clone of his older sibling when it comes to attitude, resilience, and well-rounded skills. Not surprisingly, MacDonald was watching, and he’s ready.

“The Diaz brothers are very tough, durable, and composed,” he said. “They might not look physically threatening, but they’re very smart and very relaxed. They have some weapons that a lot of people don’t have, and I know Nate is a very unorthodox fighter and he’s very original with his style so I have to be ready for that, and I take him very, very seriously.”