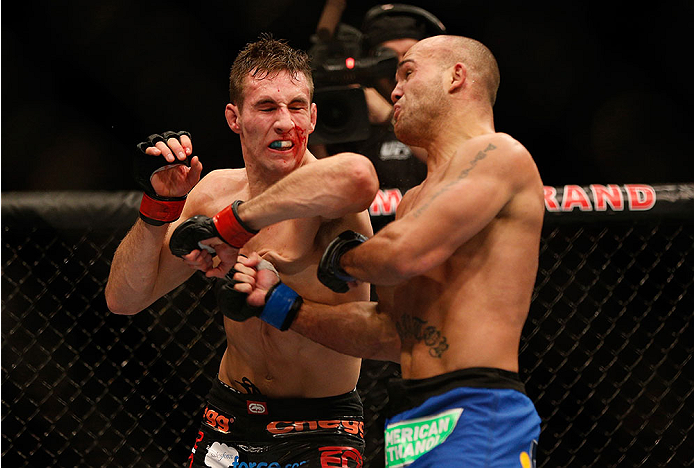 Rory MacDonald admits that “it’s been nice” not having to answer 800 questions about the possibility of fighting his friend and teammate Georges St-Pierre in order to get the opportunity to win the UFC welterweight title. And with GSP vacating the title late last year and taking a hiatus from the sport, now the 24-year-old Canadian can actually field queries about his own fights and career.

“It’s been a relief and I don’t have to think about answering that question anymore,” he said. “It was basically giving the same answer to the same question formatted in a hundred different ways. It was quite frustrating because sometimes I would answer the question three or four different times in the same press conference or around the interviewers that just asked it. It was frustrating. People just want a headline off you and that’s all they really care about.”

MacDonald has given them precious few when it comes to outlandish statements or outside the Octagon antics. He’s mainly saved his talking for fight night, when the gloves are on and the referee waves him and his opponent into battle. That’s the way the British Columbia native has always wanted it, but when he didn’t fit into the mold of brash young gun rising up the ranks, he got tagged with any number of unflattering portraits that didn’t come close to showing who he really was.

“The media can put a microscope over any particular point in your personality and magnify it and it becomes who you are to the public, so you don’t really have any control of that,” said the soft-spoken MacDonald. “You only get a certain amount of time to show who you really are, not that it really matters to me. The biggest thing is the fighting part. The whole public side of things and speaking out and stuff, that’s really secondary for me. I’m mainly focused on what I’m doing in the cage, and that’s what I’m here to do. I’m not here to get on a microphone and express who I am to people. I guess that side of me has painted a wrong picture of me.”

In short, whoever you might think MacDonald is, your opinion is probably inaccurate.

“Everyone has their reasons for being in the UFC,” he said. “I’m here for the fighting part of it, and I guess that’s hard for some people to understand.”

More specifically, he’s here to win a world championship, and as he won fight after fight, the question of meeting St-Pierre, the longtime titleholder at 170 pounds, became a more and more prevalent one, even though both said they wouldn’t fight the other. The dilemma came to a head on the night of November 16, 2013, when MacDonald faced surging veteran Robbie Lawler on the UFC 167 main card, while St-Pierre defended his crown against Johny Hendricks in the main event.

Wins by both Canadians would most certainly put them in each other’s crosshairs for the world title. GSP did his part, winning a controversial decision over Hendricks. MacDonald got upset by Lawler, losing a split decision.

“I could give you a thousand excuses, but Robbie was the better man that night, and I’m moving on,” said MacDonald of the loss, only the second of his pro career and the first since his 2010 defeat to Carlos Condit. “I’m going to keep fighting, doing my thing, and moving forward.”

Just like the fighting GSP question, losing to Lawler has already become something placed in MacDonald’s rearview mirror. Yet when asked again about the fight against the Iowa veteran, wondering if he took any solace in knowing that even when not at his best he could still be in the fight with a world-class opponent and be one round away from winning the fight, he makes it clear that to him, there are no moral victories.

“The biggest thing is that I have to be at my best,” said MacDonald. “Obviously I fell short that night because I wasn’t prepared in every aspect like I should have been, and that was the reason I lost.”

He insists that the Lawler scenario won’t be played out again this Saturday night, when he steps into the Octagon for a UFC 170 main card bout against Demian Maia. On paper, it’s a compelling matchup between two of the division’s best, but for MacDonald, it’s just another night at the office.

“He (Maia) is just the next fight,” he said. “Obviously he’s high-level in jiu-jitsu, I’ve fought high-level jiu-jitsu guys in the past, and he’s dangerous in a grappling situation, so it’s an interesting matchup, but basically my mindset is that he’s just another fight.”

Another fight that could put him right back in the title race should he win. But “Ares” doesn’t put that kind of weight on it.

“I don’t over think it so much,” he smiles. “I’ve fought 17 times and it’s just another name, another guy.”

Or to elaborate a bit, MacDonald isn’t concerned with doing MMA math or picking out possibly fight scenarios that will get him into a title fight. He wants to fight this weekend, win, and get a shot at the belt.

“That’s where I want to be and that’s what I’m asking for,” he said. “When I win this fight I want to get a title shot. If I don’t get it, and I win that next fight, I want a title shot. I just want that belt. That’s all I really think about, I don’t care who holds it, or where everyone is on the ladder; I just want the title. I’ve been thinking about that since I started training martial arts.”

If you want a glimpse into who Rory MacDonald is, you got it right there, and while the idea of being a world champion has seen different elements tossed into the mix over the years, the initial goal remains unchanged. And when you hear him talk about it, you would probably bet your house that he will eventually get there.

“I do keep in mind my goals and my dreams of being a champion in mixed martial arts,” he said. “As you grow older and you start to mature and get more responsibilities and things like that, obviously holding the belt is security for your financial well-being. But it’s also something I’ve been working towards, something I’ve dreamed about and the goal I promised myself that I would achieve.”