"This is entertainment as much as it’s a sport, and you have to win, but you have to do it in exciting fashion.” - Rory MacDonald 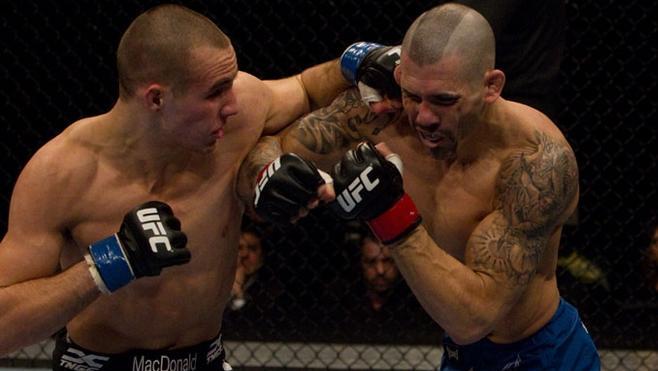 The reality of being a rising star in the UFC began to set in for Rory MacDonald in his native province of British Columbia a little over a year ago, as he prepped for his UFC 115 bout with Carlos Condit.

“It was like a mob and I really didn’t expect it,” he said of the fan reaction to him in Vancouver. But things really hit home when strangers began calling him by the nickname his gym buddies had given him years earlier – “The Waterboy.”

“‘The Waterboy’ was a nickname given to me when I was 14, and I kinda just went with it,” he explains. “It was something my friends used to call me around the gym and it followed me to my fights, but I never thought it really represented who I was when I fought. So it always came across weird to me that people who I didn’t know started calling me ‘The Waterboy.’”

This is life when you’re 22 years old with a pile of high expectations put on your shoulders, and when you go from the local scene to the big show, these are the adjustments that happen outside the Octagon and beyond the reach of camera lights. For MacDonald, June of 2010 might as well be 10 years ago; that’s how far he’s come.

In the Condit fight, the then-unbeaten Kelowna resident got out to a fast start, building a solid lead on the scorecards entering the third and final round. But then Condit turned up the heat and showed why he is one of the best welterweights in the world, as he took advantage of MacDonald’s inexperience and stopped him with less than 10 seconds remaining in the fight.

That was lesson number one. And two. And three. And four.

MacDonald now knew what it took to compete on the elite level and it wasn’t just a physical game, it was a mental one. MacDonald knew he had the physical tools to compete with anyone; now he had to compete in a battle of wits as well. In the UFC, with everything else being equal, this is what separates the haves from the have nots.

“When you’re young and you’re undefeated, you feel like you need things fast and you want everything now,” he said. “And it makes those ‘what ifs’, and you start thinking past the fight and you get all these things in your head, and yeah, you’ve got a lot of pressure from fans and yourself because it’s a big test and a big step up. I knew I was more skilled than him; it was a matter of going in there and getting it done and I wasn’t able to do it, so it was a big defeat for me.”

But he wasn’t going to make the same mistake twice, and in his next fight against Nate Diaz at UFC 129 in April, the nickname “The Waterboy” disappeared from his life, both literally and figuratively. In the Diaz bout, MacDonald grew up, dominating the talented Stockton native from bell to bell, and punctuating his three round decision win with a series of thudding suplexes that thrilled fans at Rogers Centre in Toronto.

“I didn’t plan for the suplexes,” he admits. “It was a move that’s in my arsenal and it happened to be there at the time, so I did it. I knew I had a strength advantage since he was coming up from 155, and I was able to use that. I wasn’t really planning on that in particular though.”

MacDonald’s throws of Diaz remain the lasting image of the bout, and when it comes to his nickname, you can just call MacDonald “Ares” these days. Yeah, that Ares, the God of War.

“I liked the character Ares and his traits, so I thought it was a good fit,” said MacDonald of his new moniker. “I felt like I outgrew that name (The Waterboy), and I just didn’t like it.”

Let’s not mince words – those suplexes were Ares-esque, making it perfect timing for the switch in nicknames. But now he’ll have to continue to back it up in the Octagon, beginning with Saturday’s UFC 133 bout against Mike Pyle. MacDonald is aware of what the Tennessee native brings to the table, and in taking his next big step up to a veteran opponent, he is confident that he will not repeat the mistakes he made in the Condit fight.

“I have to be aware of sticking to my gameplan,” he said. “I have to establish what I want the pace to be in the fight and I need the fight to go the way I want it to, and if it doesn’t, and it starts to go in a different way, I need to adjust and be able to keep a calm, cool, and collected thought process so I can change in there. If things aren’t going right and if the gameplan has to change, it has to change. But you have to be ready for all things. If one thing fails, you can’t pull the plug. With these more experienced guys that want to grind out a fight because they’re not as skilled, you’ve got to be careful.”

MacDonald also has to make sure he doesn’t get caught up in the verbal battle Pyle has kicked off in recent days, where the vet has made it clear that he doesn’t believe the young Canadian has earned the hype swirling around him since his Octagon debut. In Pyle’s eyes, this is a fight pitting man against boy, but such talk hasn’t rattled MacDonald, who despite his age, has been fighting professionally since the age of 16. So he’s heard comments like that before, and from his point a view, experience is not something to be scoffed at, but you can’t knock talent and desire either.

“This is my passion,” he said. “I’m in the gym twice a day, it’s what I do, and my mind is on it constantly. I’ve dedicated my entire life to this since I was 14, and the fire’s still going. What I do in there feels very natural to me, and it’s natural for me to adapt and perform at my best. This is what I was meant to do. Sometimes experience is very important, but there’s also a thing of a natural gift, and I believe I have that.”

And as far as this being a replay of Pyle’s defeat of then-unbeaten prospect John Hathaway last year, MacDonald says he hasn’t even looked at that UFC 120 fight.

“I didn’t really go back and look,” he said of Pyle-Hathaway. “I don’t really like to watch footage on guys I fight anymore. I worry about my own thing when I train and when I fight. I’ve got a basic idea of his style and what his movements are like, but I’m not worrying about what he does.”

No worries. It’s the calm every fighter needs to let everything else go and simply perform. Despite appearances to the contrary, Rory MacDonald didn’t always have that, and he’s still not the finished product. But he’s getting there, and if he defeats Mike Pyle in spectacular fashion, it may be time to start putting him in the conversation about contenders in the 170-pound weight class. “Ares” agrees, but he’s not putting too much thought into that possibility until he takes care of the task at hand first.

“This is entertainment as much as it’s a sport, and you have to win, but you have to do it in exciting fashion,” said MacDonald. “I’m able to do that and I think if I continue to gain popularity and be exciting when I win my fights, I’m definitely gonna be in the mix. But I’m not looking past Pyle. All I know is that he’s in front of me, I trained my ass off for this fight, I’m gonna be the best I can be on that night, and I’m gonna do the best that I can in there. Everything that comes afterwards, I’ll deal with it then.”