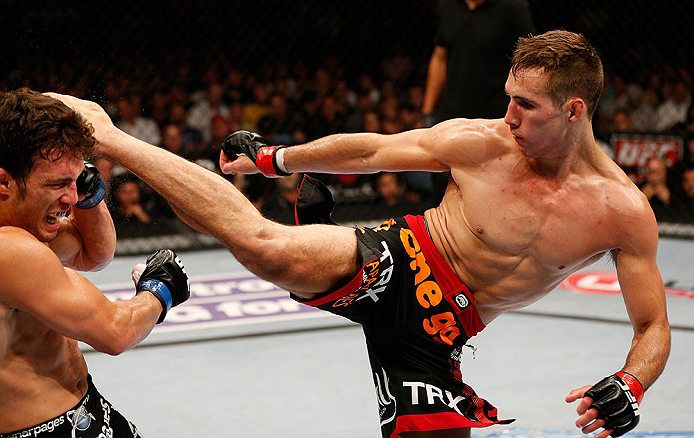 Keep the fame – he doesn’t want it.

Keep the spotlight – it has zero influence on his preparation and focus.

Keep the questions about personality, sartorial choices, and potential willingness to step into the cage with his friend and training partner too – asked and answered, ad nauseam.

While the sporting landscape is littered with young stars courting the spotlight and craving the attention of fans and media alike, the 24-year-old MacDonald prefers to play the cut, tucked away in the chilly transition between fall and winter in Montreal, content to work on his craft without interruption or an audience.

The kid from Kelowna, British Columbia who was more interested in going to the gym than going out to celebrate his birthday has been called everything from the heir apparent in the welterweight division to “The Canadian Psycho,” a moniker bestowed on him due to his sharp sense of style and the steely, emotionless way he approaches interviews and media obligations during fight week, but there is a far more accurate and apt tag to describe MacDonald.

When it comes to fighting in a cage, MacDonald is a savant.

The 15-1 welterweight nicknamed “Ares” pursues his craft like very few in the sport, and that’s not to say his colleagues and contemporaries are not committed to their training – MacDonald is just on a different level.

Rising to the top of the sport has been at the forefront of his thoughts since he was a 16-year-old, living on his own while completing high school in order to keep training with David Lea at Toshido Martial Arts. That same commitment to being the best is why he made the difficult choice to make the move to Montreal and leave the only coach he’d known at the time following his UFC 115 loss to Carlos Condit as well.

Finding ways to improve and thinking about the task at hand dominates his thoughts, which is why he comes off as disengaged and dismissive at times in interviews – that, and the focus often seems to be on things MacDonald doesn’t want to spend his time talking about, like a fight with Georges St-Pierre or the latest verbal assault fired in his direction by past, present, or potentially future opponents.

In training camp and especially during fight week, there is only one thing the dangerous and still developing Canadian is thinking about.

“The focus is always the fight; that’s always the focus,” says MacDonald, who will face the challenge of Fight Week this week in Las Vegas in advance of stepping into the cage with resurgent veteran Robbie Lawler Saturday night at UFC 167. “The interviews and the same question over and over again just become tiring. My focus is always the same.

After a pair of outings where he was reluctantly front and center in the storylines heading into the event, the preamble to Saturday’s meeting with Lawler has featured far less attention, something the guarded fighter appreciates a great deal.

“It’s really nice,” he says of the lack of trash talk swirling around this fight with Lawler after 140-character jabs became central to the pre-fight conversations before his victories over BJ Penn and Jake Ellenberger. “I haven’t had to deal with any questions from the media about it, so it’s been relaxing in that sense.

“I’ve just been doing my regular thing with no distractions from the media or my opponent. It’s been nice. There has been less hassle with having to answer repetitive questions. And it helps fighting on a card with Georges, so a lot of the attention is off of me and on to him.”

Part of what sets MacDonald apart is that in a sea of fighters eager to know everyone’s opinions – and ready to take umbrage with anyone who says something even half way out of line with their own views – the gifted 24-year-old genuinely isn’t impacted by what anyone outside of his inner circle says.

That goes for everyone.

In the wake of his victory over Ellenberger this summer in Seattle, fans and pundits laid into the losing welterweight, but had some choice words about MacDonald’s performance as well.

Though the fight didn’t go exactly as planned, the Tristar Gym representative was pleased with his effort, and believes a lot of the responsibility for the fight falling short of expectations rests at the feet of his opponent.

“It wasn’t hard to listen to,” MacDonald says of the critical comments. “It doesn’t affect me. I’m just going to be myself, fight how I fight, and I think the fans will appreciate my fights.

“I feel like I’ve had great fights in all my fights, and a lot of judgment is cast on your last performance in this sport. In that fight, a lot of the blame has to fall on Jake – he was getting picked apart and he knew if he came in, he would get counterpunched and get knocked out. He wasn’t willing to make that sacrifice.

“What I was doing was working, and I felt like it was a matter of time before I was going to be able to end the fight because I was putting pressure on Jake to make his move. I was putting him further and further behind on the cards, and he wasn’t willing to take the risk necessary to win the fight. I think that falls on him, not me.

“But a lot of people just see two people fighting in a cage, and don’t understand the chess pieces moving and the tactical elements that go into winning at this level.”

Conversely, that is almost exclusively what MacDonald thinks about, and it is that locked in focus and ability to dismiss everything except what matters more to his continued development and getting one step closer to his ultimate goal that many don’t understand, prompting them to label the driven athlete “detached.”

The piece they’re missing, however, is that this isn’t just a job or just another fight for the well-rounded competitor who has 12 finishes in his 15 career wins – it’s a passion and a journey, one that has consumed him from a young age, and one that he intends to see through to the end, whenever that may be.

Saturday’s contest with Lawler is another chance to test his skills, prove he’s superior, and close in on his goal of winning championship gold before his 25th birthday – a benchmark he set for himself prior to his UFC debut, and one he still hopes to reach before he reaches the quarter-century mark this coming summer.

“Robbie’s had some good performances in his last few outings, and he’s been around for a long time,” he says in his patented, economical fashion. “I think Robbie and I match up well for an exciting fight, and I think I will have a dominating performance that everyone will enjoy watching.

“I really think that I’m going to be able to showcase a lot of my skills in this fight. I’m going to have a dominating performance, and I’m in great shape. I couldn’t be any happier to have a fight like this right now.

“At the end of the day, I feel that I’m closer to that title shot every time I fight, and one more or two more good performances put me right there. So we’ll see what happens.”

When the fight is over, he’ll retreat to the slush-filled streets of Montreal, away from the spotlight and the questions about his suits, his personality, and a fight with his teammate that he’s answered the same way innumerable times for two years.

He’ll head back to the gym, the strength and conditioning sessions, and his dogged pursuit of greatness that seems to perplex so many.

And none of that is going to change.

Rory MacDonald is different, and that’s a very good thing for this sport.