"I do believe I’ll be better in all areas. I’ll get in the cage, start fighting and my body will do the rest." - Rory MacDonald 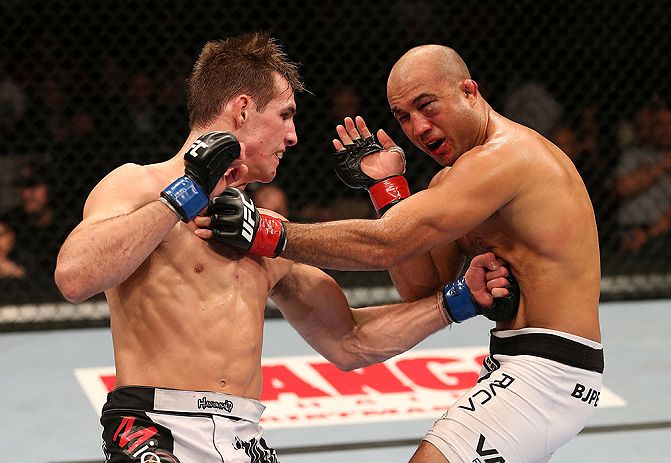 Rory MacDonald has been poked, prodded and pin-pricked like the shy, fat kid in the schoolyard wearing a bullseye on his back. He’s quiet, reserved and unassuming, but deep within MacDonald’s reservoir sleeps a lion that doesn’t appreciate being treated like a circus animal.

Jake Ellenberger, MacDonald’s UFC on FOX 8 opponent this Saturday at Seattle’s Key Arena, has played the role of ringmaster. Ellenberger has gone on record stating MacDonald (14-1 MMA, 5-1 UFC) was nothing special. He threw jabs at him over Twitter. He teed off during a conference call by chiding MacDonald for making the “stupid decision to fight me.”

A winner of eight of nine bouts over the past three years, Ellenberger (29-6 MMA, 8-2 UFC) possesses the talent and desire to smash anyone’s hopes to pieces. MacDonald is one who’s had his heart ripped out. Three years ago he was seven seconds from a victory over Carlos Condit until a barrage of punches from the “Natural Born Killer” compelled the referee to halt the fight with precious little time remaining.

MacDonald, 24, hasn’t completely recovered from the loss, but rather than dry up and fade away, the sensation out of Montreal, Canada, has blazed a trail of destruction en route to Seattle, so to think that some derogatory comments will stop him from running roughshod over Ellenberger is ridiculous. His words will never scream bulletin board, jump off a page or out of a computer screen. If you try and get him to bite, he’ll smile. Then he’ll enter the Octagon and dissect the likes of the legendary BJ Penn for three rounds. He’s soft-spoken and at times silent, but when the lion awakens you won’t see him coming.

“I’ll have something up my sleeve,” MacDonald said. “I do believe I’ll be better in all areas. I’ll get in the cage, start fighting and my body will do the rest. I’ll know what to do when I get in there. I plan on just taking the fight wherever it goes and looking for the finish anywhere.

“Fighters talk, but my reaction to that doesn’t have to be dramatic. It is what it is. It’s just words. I think he’s trying to get me fired up or emotional or something. It isn’t working.”

A winner of four straight since the heartbreak in Vancouver, MacDonald is preparing for a match with major title picture implications. Ellenberger has rebounded from a stunning knockout loss to Martin Kampmann in June of 2012 with two straight victories. Denied a No. 1 contender’s match with Johny Hendricks after MacDonald’s injuries altered the landscape of UFC 158, “The Juggernaut” smashed Nate Marquardt in three minutes.

Ellenberger and MacDonald are part of the new wave in the UFC welterweight division. The winner could be matched with the victor of the Hendricks-Georges St. Pierre -- the champion is MacDonald's Tristar Gym teammate -- bout that will headline UFC 167 in November. Forget about St. Pierre for now; MacDonald has refused to entertain the thought of competing against him even with UFC gold at stake. His solitary focus is on Ellenberger, one who has ranked him low on the importance scale.

“In this sport, people judge you on every performance," MacDonald said. "You’re only as good as your last fight. Every fight is important to win and look your best. That’s my attitude towards it.”

MacDonald is determined not to let his emotions betray him, which he blames for the loss to Condit in a fight he dominated until the New Mexico native took control in the third round. Stamina was an issue for a fighter not yet of drinking age in the United States. He was tense, stressed and didn't relax for a second, and he has since trained smarter by using his mind and improving his conditioning.

“I try not to be such a barbarian about it,” MacDonald said. “It’s a balance.”

Taken down, pressed against the cage and pounded relentlessly by Condit late in the fight, MacDonald desperately tried to hold on as the seconds counted to the final horn. Whether the fight should have actually been stopped or not is a source of debate, but MacDonald isn't looking back on circumstances. Still, he was seven seconds from at the time the biggest win of his career, and the stoppage has left a taste worse than dirt that hasn't exactly gone away.

“It’s always a [crappy] feeling and I’m still a little bit disappointed over that,” said MacDonald, deprived of a UFC 158 rematch with Condit by a neck injury. "I would like to avenge that loss sometime this year or next year, if it works out that way. I feel like I’ve come a long way from that. I learned a lot from that experience. I want to prove to myself and everyone around me that I have what it takes to come back and beat the man that beat me.”

It wasn't the first time that nerves threatened to get the best of the young Canadian. Training since the age of 14, MacDonald made his pro debut two years later at an Extreme Fighting Challenge event. Although he submitted Terry Thiara in two minutes and 11 seconds, the buildup to the fight left him drained and unprepared mentally, and he didn't know what he was getting himself into.

"It was probably my most stressful fight yet, the lead up to it," MacDonald said. "It was a really cool experience learning how to deal with that.”

What snapped him out of it was a good old-fashioned punch in the face.

“That kind of woke me up,” MacDonald said. “I pretty much just stood there. The guy came across the ring and he hit me with five punches. I fell into the ropes, bounced off them and attacked him. Everything from there was autopilot.”

In recent years, MacDonald's path has been carefully orchestrated by his team at Tristar, which he joined after the Condit loss in what was only his second UFC fight. Head coach Firas Zahabi has been determined to develop his young prodigy patiently enough to where he'll have a run like St. Pierre -- or see their worlds potentially collide. The returns have been a current 4-0 run and talks of MacDonald becoming the next GSP. Alas, the youngster admits, patience does have its virtue.

“I’m happy with it,” said MacDonald on Zahabi's guidance. “He’s a smart man. We’ve made smart choices and I’m on a roll for a reason.”

Actions have spoken louder than words, which is something Ellenberger could find out on fight night. A war of words means nothing to MacDonald. Once inside the cage it’s a deadly game the silent warrior intends to win.