"I feel that I’m the best in the world, and with the skills that I’ve acquired over the years of training martial arts, I really feel that if I’m at my best and I perform how I believe I should, I can beat anybody." - Rory MacDonald 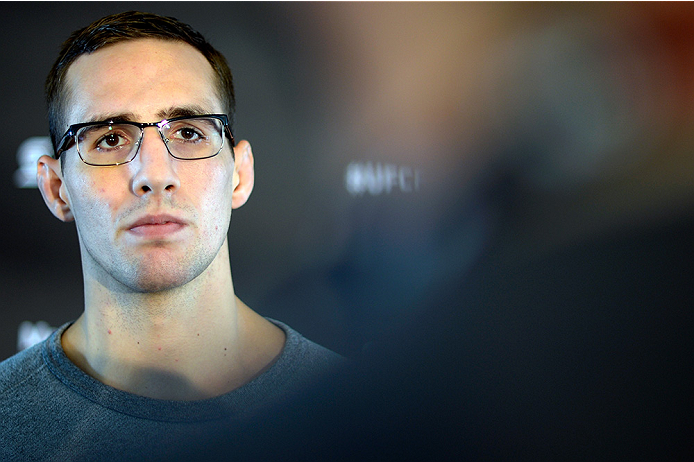 Rory MacDonald has been living much of his life like most won’t, fighting grown men while still a teenager, leaving his home in British Columbia to train in Montreal, and opening up his life to those who choose to pick at him because he’s not a trash talker or demonstrative speaker with a collection of sound bites in his back pocket. It’s not an easy life, but it has its perks, one of which will be a shot at a world championship. He hopes that date will be set with a win over Tarec Saffiedine in Saturday’s UFC Fight Night main event in Halifax, but in the meantime, he has no regrets about the way things have been going.

“The big sacrifice was moving to Montreal,” he said. “That was probably the biggest one I’ve had to face and the hardest one. But I have no regrets. I definitely had to do what I had to do to get where I want to be, and I believe I’m almost there. Time will tell.”

Time is a beautiful thing when you’re 25 years old like MacDonald is and have a seemingly endless supply of it, yet as he approached the Saffiedine fight, the MMA world has reached the point where they want to see a return on the time they’ve invested in watching the career of “Ares” grow. The loss to Carlos Condit in 2010? It was nearly a win and a much needed learning experience. His decision defeat to Robbie Lawler in November of last year? Another close loss against a surging veteran who was going to beat nearly every welterweight in the world that night.

Yet after rebounding with back-to-back victories over Demian Maia and Tyron Woodley, and with the hiatus of his friend and teammate Georges St-Pierre paving the way for him to get a shot at the title he wouldn’t fight for while GSP was king, MacDonald is seen as a fighter who needs to make his move now. And he wouldn’t necessarily disagree with that notion.

“I feel that I’m the best in the world, and with the skills that I’ve acquired over the years of training martial arts, I really feel that if I’m at my best and I perform how I believe I should, I can beat anybody,” he said.

The Woodley fight was particularly impressive. Not just because he shut out a world-class contender, but the way he did it, with an easy and fluidity he’s shown glimpses of but never for 15 consecutive minutes. And for a young man not easily impressed with himself, he did leave his home province with a smile that night in June.

“I was really happy with the way it went,” he said of the Woodley bout. “I wasn’t expecting it to go any way in particular, but the techniques that I was working on really showed in that fight, and I can’t complain. Obviously you always want to finish the fight, but I was happy with how I performed.”

Was that the corner-turning fight though, the one where everything is smooth as silk technically, all the outside the Octagon ducks are in a row, and the confidence is there to dominate any 170-pounder across from him on fight night? If it is, MacDonald wouldn’t be surprised.

“After every fight there’s a change,” he said. “There’s a learning experience in every fight, so I definitely feel different from when I first started and I’ve gained so much more experience and I’m so much more comfortable in the UFC, under the lights in the cage and stuff like that. It’s definitely changed.”

Change can be good or bad. MacDonald looks at it all positively, and despite spending his entire adult life in the public eye, he hasn’t grown tired of his life’s vocation yet, and it doesn’t look like he will anytime soon, if ever.

“I love martial arts and that’s been an outlet for me for a long time, and I still really enjoy it,” he said. “Fighting is still really exciting for me and this is where I’ve always wanted to be, fighting the best guys and hopefully fighting for the title sometime next year.”