Rory MacDonald - A Champion in the Making 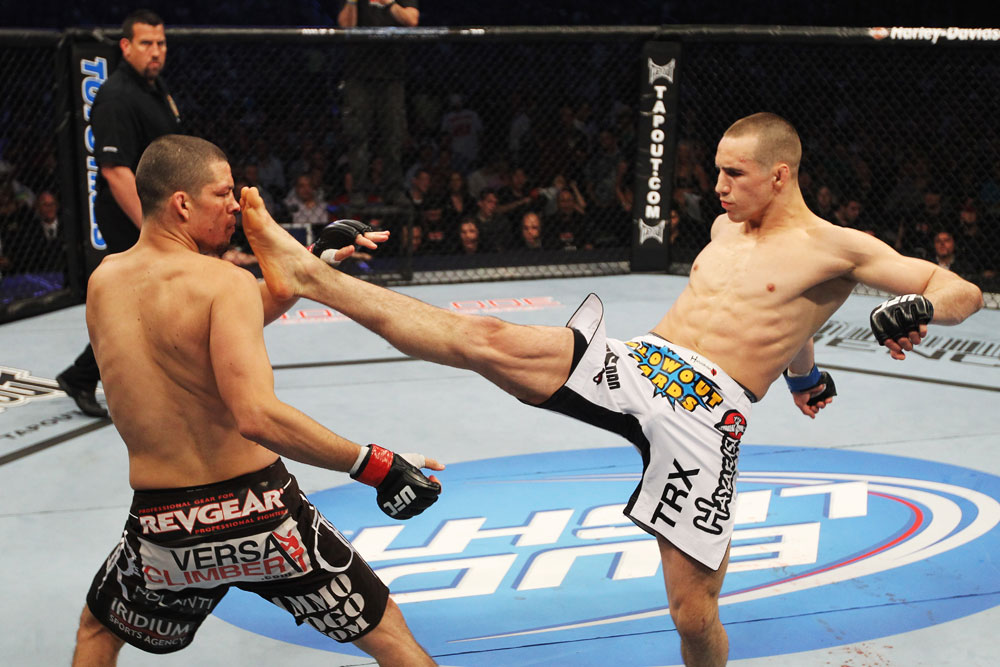 The landscape of the UFC welterweight division has shifted a great deal over the last year.

In the 12 months since Georges St-Pierre defended his title for the sixth consecutive time at UFC 129 against Jake Shields, the 170-pound ranks have been in a constant state of flux, with established stars being overtaken by emerging talents, new names being added to the roll call of contenders, and the dominant champion being felled by injury.

That same brisk night in Toronto, St-Pierre’s teammate and fellow Canadian Rory MacDonald cemented his standing as one of the top prospects in the division, rag-dolling Nate Diaz around the Octagon during the third round of their decidedly one-sided meeting. Four months later, the Kelowna, British Columbia native made quick work of Mike Pyle, stopping the veteran in less than four minutes at UFC 133 in a performance that served notice that MacDonald was more contender than up-and-comer.

With the division as wide open as it has been in years, many see MacDonald’s upcoming fight at UFC 145 as an opportunity for the 22-year-old Canadian to establish himself as a legitimate threat. It’s a feeling the talented young fighter shares, but not because of the changes that have transpired in the last 12 months.

“Georges being out or the veterans falling off, it doesn’t matter,” says the soft-spoken MacDonald. “Whatever the case may be, I feel like I’m headed towards being the best in the world, regardless of who’s in front of me. I’m not worried about who falls off or who the new contender is; I’m just focused on increasing my skills, and improving myself as a fighter. I really feel like I’m on track to be a great champion soon.”

The confidence that a championship reign rests on the horizon is nothing new for MacDonald. Even before he’d made his UFC debut at age 20, the former King of the Cage lightweight champion had designs on greatness. As he prepares for his fifth bout in the biggest organization in the sport, the rapidly developing welterweight believes he’s on track to reach his goal of becoming a champion before his 24th birthday.

“I feel like things are going well for me. I think I’m real close to achieving one of the major milestones of my career, and being a champion in the UFC. I definitely feel I’m on the right path and in the right position, especially at my age, so I’m happy with where I’m at, but I’m not happy with staying here. I still need to make more waves, continue to progress, and continue to have exciting fights.”

One of the key contributors to MacDonald’s quick climb from being a 20-year-old neophyte to a legitimate threat in one of the UFC’s deepest divisions was his decision to relocate to Montreal to train with Firas Zahabi and the team at Tristar Gym, a decision that mirrored a difficult choice MacDonald was faced with earlier in his career.

While still in high school, MacDonald was given the option of moving from Kelowna with his family or staying behind on his own so that he could continue his mixed martial arts training.

“It was tough being alone and not having parents around when I was going through high school in terms of staying disciplined, but I adjusted, and stayed focused.”

A handful of years later, MacDonald can see the parallels between that situation and his decision to head to Montreal full-time after UFC 115.

“It was really difficult for me to leave my family behind, my friends, and my first and only training camp (at Toshido Martial Arts), and my trainer, David Lea. It was a really tough decision for me, but to take the next step in my career, and evolve as a martial artist, I felt I needed to.

“After the Carlos (Condit) fight, that’s when I knew I needed to move,” discloses the 22-year-old who ditched his original nickname (The Waterboy) in favor of sharing a moniker with the Greek god of war (Ares) back at UFC 129.

Fighting in front of a partisan crowd in Vancouver, MacDonald controlled the current interim welterweight champion through the first two rounds before Condit roared back to secure a stoppage late in the third. Coming up short against “The Natural Born Killer” convinced him it was time to make la belle province his permanent home.

“I had visited Montreal, stayed with Georges, and trained several times for a couple weeks (at a time) here in Montreal, and I recognized this was the best place for me.”

MacDonald credits Zahabi with taking his skills to the next level inside the cage, and the vast collection of veterans who call Tristar home with doling out encouragement and insight at every turn.

“Inside the cage, working with Firas changed a lot of my style. I’ve evolved and learned new things, added different things to my game. Technically, I changed a whole bunch for the better.

“Outside, lifestyle things, I’ve adapted to the big city and this lifestyle, and because there are so many veteran fighters out here, I get to sit down and really listen to what they have to say; they always have good advice, whether it be career-based or just the little things you go through in training as you prepare for a fight. It’s good that way too.”

One of the biggest adjustments MacDonald has made is finding a specific training regimen that suits his needs. After battling injuries over the first two years of his UFC career — including having to withdraw from a planned bout with Brian Ebersole at UFC 140 in Toronto last December — the Canadian contender is hopeful that his new system will help him stay healthy in 2012, and lead to more frequent appearances inside the Octagon moving forward.

“Lately, I’ve found the program I have set right now works best for me, so I’m happy with that. I think I’ll be able to start fighting more consistently throughout the year now. My goal is to start fighting three times a year at least, not one or two, and then get injured. That’s really annoying. The fans don’t like it, and I don’t get to showcase my abilities, which is what I like to do the most. Finding my groove in my training is going to pay off massively.”

MacDonald’s next opportunity to showcase his abilities comes this weekend against Che Mills, another of the talented new additions to the welterweight ranks over the last 12 months. The popular British striker made an explosive debut last October, finishing TUF 13 alum Chris Cope in just 40 seconds at UFC 138, earning Knockout of the Night honors in the process.

Coming off wins over Diaz and Pyle, some have viewed Mills as a step down in competition for MacDonald, but the 22-year-old doesn’t concern himself with the matchmaking decisions or outside perceptions of his upcoming opponent.

“I don’t worry about the politics side of it or all of that. Che Mills is a great fighter, and a worthy opponent. Just because he hasn’t been seen in front of the camera that many times doesn’t mean he’s not dangerous or a great martial artist.

“You can’t be fooled by TV,” MacDonald continues. “There are a lot of guys you may not have heard of (before) that would beat some of the best guys in the world, it’s just that they may not have been marketed properly, you know? It’s definitely not a step down.”

This fight is, however, a step up on the marquee, as MacDonald and Mills will serve as the co-main event in Atlanta, setting the table for the long awaited UFC light heavyweight title showdown between Jon Jones and Rashad Evans. It’s an opportunity MacDonald is proud to accept, and one he feels he’s earned inside the cage.

“I feel like — and I think the UFC feels it as well — that I put on good shows every time I fight. The fans have responded well to when I fight — they seem to enjoy it — and that’s what I strive to do. It’s an honor that I’ve been put in this position with the little amount of fights that I’ve had, but I feel that it’s performance-based, and you reap the rewards for performing well.”

From his first round submission win over Mike Guymon in his debut through his dominant performance against Mike Pyle in August, there is no denying MacDonald has been performing well. The welterweight has shown dramatic improvement every time he’s stepped into the Octagon, and he looks to continue that trend at UFC 145 and beyond.

“Every fight in my career has been like that; I always want to take another step forward. Every year I improve massive amounts just because I’m focused and determined to keep improving, and it shows in my fights.”

MacDonald says he expects this to be the best performance of his career, and while he’s not one for specific predictions, the confident welterweight contender with the championship plans does have an outcome in mind for Saturday night’s co-main event.

“I definitely see myself stopping him, and being the victor.”