Rory MacDonald Calm Before He Storms

"I used to look up to BJ a lot when I was younger. And now
that I’ve grown up a little bit, I’m competing at the same level and
it’s pretty amazing where I’ve come. It’s an honor." - Rory MacDonald 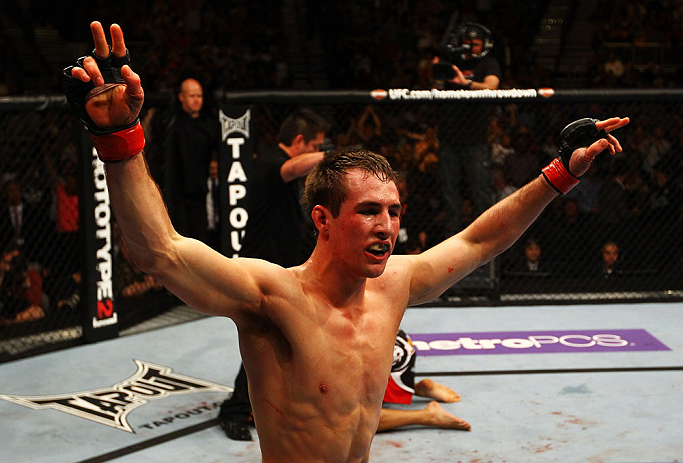 If there is a curse for being just 23 years old and rapidly rising up the ladder in the UFC, it’s that oftentimes that road to the top is strewn with the bodies of fighters you once called heroes. That can leave the young athlete in question in one of two positions: he respects these heroes too much and is tentative on fight night, always keeping him from elevating his status, or he is ruthless in execution and tenacity, leaving no doubt that there is a new sheriff in town.

Where Canadian phenom Rory MacDonald is at leading up to his pivotal Saturday bout with former two division champion BJ Penn could have been open to debate, at least until you ask him about his first impressions of “The Prodigy.” In response, MacDonald is both respectful of Penn, yet still confident in his own abilities.

“I used to look up to BJ a lot when I was younger,” he said. “And now that I’ve grown up a little bit, I’m competing at the same level and it’s pretty amazing where I’ve come. It’s an honor.”

An honor that will hold him back once the Octagon door closes, out of respect for a veteran warrior? Not a chance.

“Ever since the Carlos (Condit) fight a few years back, I never looked at a fighter like that ever again,” said MacDonald. “So I haven’t had to worry about that.”

For all intents and purposes, that was the night MacDonald grew up. Sure, he always had the talent and will to win, but in facing the former WEC and future interim UFC champion, he realized that after putting it on Condit for over two rounds before getting stopped with just seven seconds in the fight, he belonged at the upper reaches of the welterweight division.

Subsequent wins over Nate Diaz, Mike Pyle, and Che Mills confirmed that notion – not just for MacDonald, but for the world – and while a lot of the pre-fight talk has centered on Penn’s return from a brief retirement and his desire for one last history-making run, this could very well be MacDonald’s show, though he hasn’t felt the pressure attached to such an important fight.

“It’s actually been really mellow, to tell you the truth,” he said. “I haven’t really had to do a whole lot. I did a press tour in Vancouver at the two month mark; it was really easy, a two day thing. I did the (UFC 154) Q&A and a few interviews, but really it’s been very mellow. The week of the fight is always a little bit hectic, but that’s to be expected. There are always curveballs, but I’ve had a few experiences now with being at the press conferences and being the co-main event, so I’ve got those to fall back on and it’s not as much of a surprise anymore.”

And with MacDonald not being on social networking sites every waking hour and not getting involved with reading every word written about him, it leaves him time for the things he deems important: training, family, friends, and more training.

“I don’t really pay attention too much to other people’s opinions,” he said. “I’m kinda in my own little world. I’m not huge on the internet and looking up what people think. I could really not care at all. I like my family, I like my friends, I like what I do, I like doing martial arts and I like competing, and thank God I get to get paid for it. This is my life’s work at the moment, and that’s pretty much all I’m focusing on.”

Back in his adopted hometown of Montreal, things are a little bit quieter than they were a few weeks back, when several of his TriStar Gym teammates, including 170-pound champ Georges St-Pierre and middleweight up and comer Francis Carmont were getting ready for their UFC 154 bouts on November 17. Now, the focus is on MacDonald, and while there are less bodies, there are still plenty of quality squadmates in the gym to help him prepare.

“Obviously the guys who fought are taking a break, but there are still lots of guys to train with,” he said. “It affects me, but I still have a lot of great training partners. It’s not as many as I did before, but I definitely have more than enough to go around.”

So with media obligations not bothersome, his training situation secure, and a high spot third from the top on one of the biggest cards on 2012, what could possibly be bothering MacDonald heading into the Penn fight? Nothing really, other than the desire to break the pattern he’s had since 2007 where he has never fought more than twice in a calendar year.

“I need to be more active,” said MacDonald, 13-1 in a pro career that began in 2005. “I just keep suffering random injuries or accidents or bumps in the road that have derailed my plans and scheduling. But I plan on having a very successful 2013.”

For proof of life after injuries, he needs to look no further than St-Pierre, who successfully returned from a serious knee injury to defeat Condit in the main event of UFC 154. MacDonald was there that night, and it was more than enough motivation for his own bout on December 8th.

“It definitely got me excited, but I think it helps me focus on the task at hand and what I’m working towards,” he said. “So I think it was a positive thing being there for that fight and seeing the world championship of my weight division take place.”

There’s no belt on the line this weekend in Seattle, but for MacDonald it might as well be a title fight, as he’s facing one of the premier mixed martial artists of this era. As for what’s next, he’s already gone on the record saying that he has no desire to face his teammate, GSP, for the belt, but he wouldn’t mind clearing out everyone else at the top in the meantime. And if he has his way, he’ll start with the man who handed him the only loss of his career.

“Condit is definitely on my radar after this fight, so we’ll see,” said MacDonald. “I really think that the performance I’m capable of putting on December 8th is gonna put me in the contendership of fighting guys like Nick Diaz, Carlos Condit, Hendricks, all those guys. So I have a very busy 2013 ahead of me.”

Who said youth is wasted on the young?