Roque Martinez Is Embracing The Challenge

Guam's Roque Martinez's UFC debut was a whirlwind experience, this time around, he's ready to show what he's really capable of.
By Thomas Gerbasi, on Twitter: @TGerbasi • Nov. 11, 2020

Roque Martinez knew exactly what was at stake the moment he got the phone call.

“I just love fighting, so I was good to go,” said Martinez, who dropped some clothes in the wash and told his family that he was going to be fighting in the UFC for the first time.

“They were like, ‘Okay, so when's the fight?’ I told them I'm leaving in about two hours. (Laughs) It's this weekend. I just threw my load in the wash, and said once that's dry we're heading to the airport. They were freaking out, but they understand that it's something I'm passionate about and they all support me.”

Two hours later, the 34-year-old Tamuning native was on his way to the “Fight Capital of the World” to face unbeaten heavyweight prospect Alexandr Romanov on the September 12 UFC Fight Night Card.

It wasn’t the first rodeo for Martinez, who was about to partake in his 23rd professional fight, but it was his first visit to the UFC Octagon, and with three months or three days’ notice, he wasn’t going to turn it down. 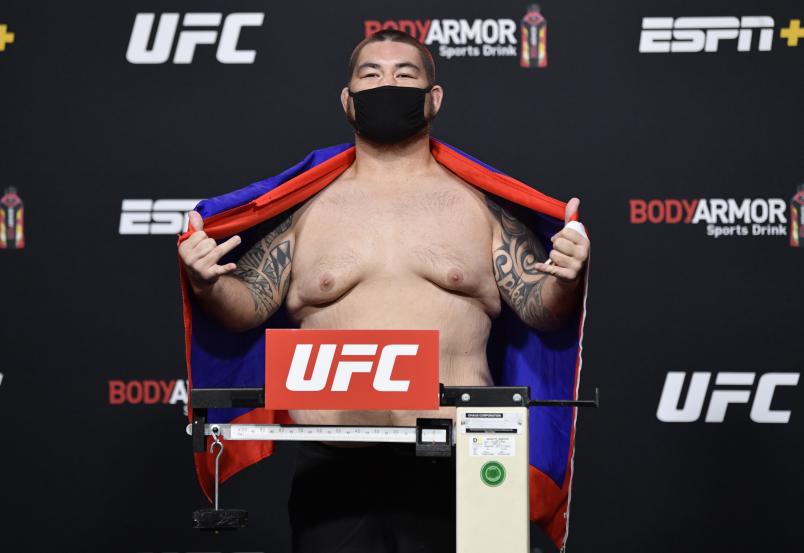 Roque Martinez of Guam poses on the scale during the UFC Fight Night weigh-in at UFC APEX on September 11, 2020 in Las Vegas, Nevada. (Photo by Jeff Bottari/Zuffa LLC)

By that weekend though, the dream scenario turned into a nightmare, as he was submitted in the second round by the Moldovan. Martinez gave it his best shot and showed plenty of grit, but it just wasn’t his night.

“My closest fans know that's not the best of me,” he said. “They know I deserve to be there. It's really just about proving it. I don't blame the fans who think I shouldn't have been there because that was not a good performance, especially the way I got beat. But that's just what I love about the sport is that I can come back and prove myself again.”

That second chance is back in the same place where he made his first UFC walk, and when he meets Don’Tale Mayes this Saturday, Martinez enters the fight with a solid training camp behind him and the opportunity to fight without the mayhem that comes along with a short-notice debut.

“I had to do those medicals right when I landed,” he recalls. “Straight from the airport to my first appointment. Knowing that I don't have to do that this time is a huge weight off my shoulders, so I can just focus a little bit more on enjoying myself and that's what I love about fighting, is enjoying the whole ride.”

For over 13 years, Martinez has done just that, whether fighting at home or by making a second home in Japan, where he fought the likes of Mirko Cro Cop, Jerome LeBanner and Jake Heun over the past several years. And while he always thought of fighting in the UFC, he was making a living in Japan and was happy with where he was at. But with the COVID-19 pandemic taking the world by storm in 2020, Martinez was left without the opportunities a UFC contract would provide him.

“I was definitely content in Japan,” he said. “I really love Japan. Put aside fighting and I love going there. I actually vacation there pretty often. But the real determining factor of pushing for that call to the UFC was the whole pandemic thing, with not many opportunities to fight anymore due to the travel bans. It only made sense to try and get the push to get into the UFC, especially with the frequency of the fight cards now. I'm a fighter and I have to fight. I'm not one of those guys that will fight once every now and then and just enjoy being there. I've gotta fight.”

He got his call, and he got a fight. Now he has his second in two months and he couldn’t be happier. And while many of his fellow fighters in Guam have taken their show on the road training wise once they get into the UFC, Martinez is determined to not just do his camps at home, but to help build a new MMA culture on his island.

Use Stats To Preview The Biggest UFC Vegas 14 Matchups

“I see a lot of the guys here leave to do their camps in the States and it's totally understandable, but I have this vision of really building up our local MMA scene again,” he said. “I want to fly some guys in with expertise and I want to do my camps here. I love Guam, I love being from here and, at the end of the day, I want to represent Guam and show that we can do everything here. It's my huge vision to build this culture of fighting out here back up, because we did have that at one point. I want to build it back up.”

It all starts with Martinez having success on MMA’s biggest stage. And to get there, he’s had to return to a familiar hill close to home.

“We've been doing this for years, since I started my career in fighting,” he said of his runs up the steep hill. “We did it a lot and I haven't done it in such a long time. I had to go back to the roots. And man, the hill is long. (Laughs) There are two portions of it. Starting from the bottom, it's like a slow gradual climb and at the very end, it's a shorter climb but it's definitely steep. The thing I like about those hills is you can go at it as hard as you want, but that thing ain't gonna get tired on you. It's gonna be there and you have to face it every sprint up. There's no wearing down the hill, but it will wear you down. That's why I love it.”