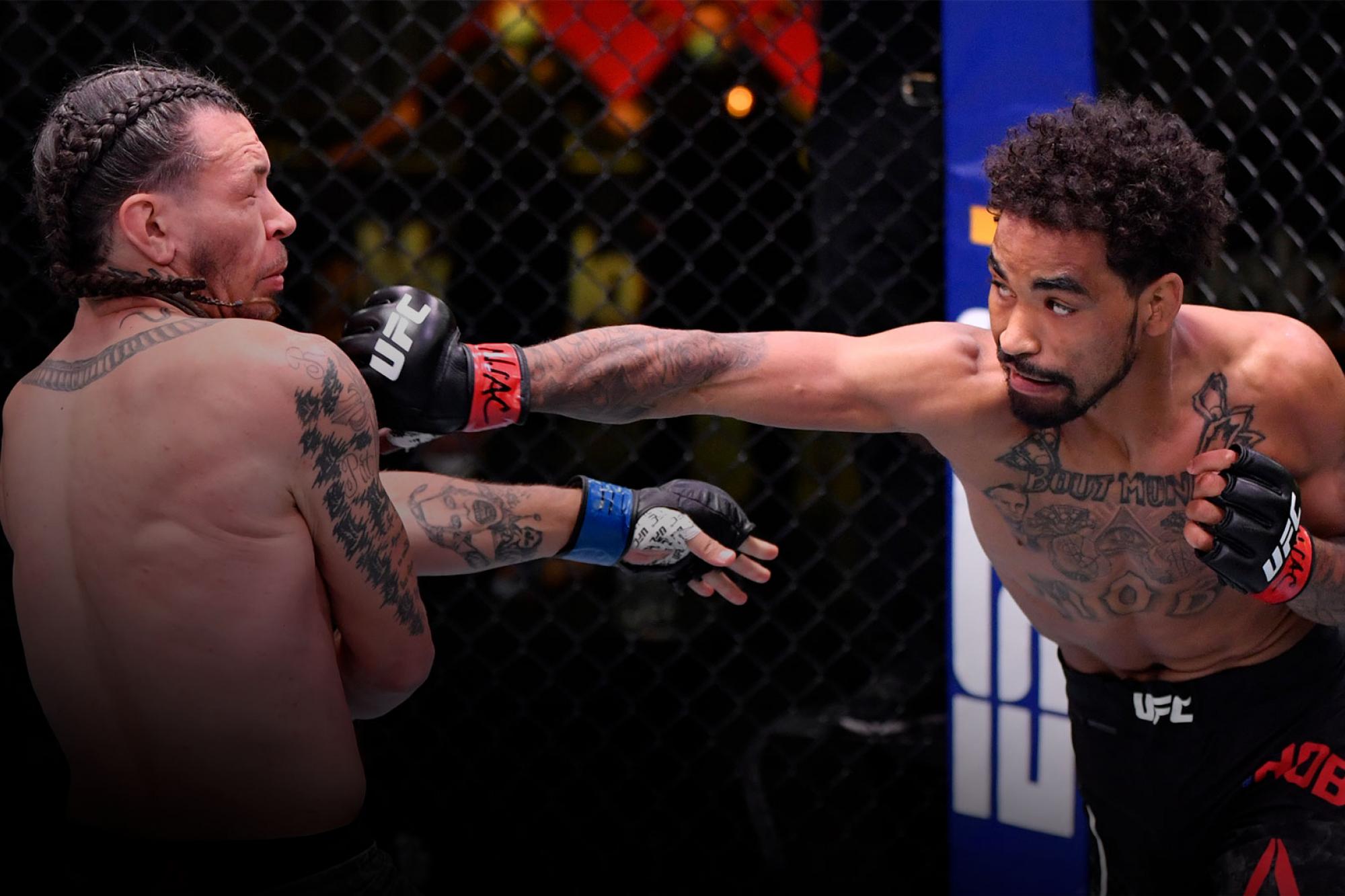 Roosevelt Roberts is confident that a win at Saturday's Fight Night will be the start of a big run in his UFC career
By Thomas Gerbasi, on Twitter: @TGerbasi • Jun. 18, 2020

Roosevelt Roberts was minding his own business on May 29 in Las Vegas. He had just made weight for his bout with Brok Weaver the following night and was relaxing when one of his teammates asked him why he was going after Weaver on Twitter.

“I started reading everything and I was like, this is crazy,” laughs Roberts, recalling the afternoon he blew up Twitter without even having an account on the social media service. “I figured somebody's just out there messing with me. I tried to sit back and think about who it could be, but it could be anybody.”

Whoever it was, Weaver believed that it really was Roberts and he fired back in kind. It was bizarre and amusing, but it should have been easily detected since the fake account only had one “o” in Roosevelt. Nonetheless, it added a new layer to an already fiery matchup.

“This guy's gonna have me looking crazy to everybody,” laughs Roberts. “And I was like, damn, this dude (Weaver) really thinks this is me. We were talking crap to each other at weigh-ins, so he probably thought I was still talking crap.”

Well, the bottom line about any trash talk, whether genuine or fake, is that in this sport, you eventually have to fight, and once the Octagon door closed, Roberts continued to cement his place as one of the top prospects in the lightweight division with a second-round submission win over Weaver.

MORE UFC VEGAS 3: Significant Stats | Fight by Fight Preview | Fighters On The Rise | Burgos To Turn Around His 2020

When all was said and done, Roberts went and started his own Twitter account (@GoGetta_Rowskii) and assumed he would have a little down time until his next fight. That didn’t happen, as he got a call with the biggest fight of his career – a meeting with Jim Miller taking place this Saturday in Las Vegas. Vacation will have to wait.

“This was something that came out of the blue,” said Roberts. “But me and my manager and my coach felt like this was a good opportunity and I'm already in shape, so let's see if we can do a little catchweight.”

Both sides agreed to meet at 160 pounds and we’ve got ourselves an intriguing matchup between the man tied with Donald Cerrone for the most fights in UFC history come Saturday night and a rising star who a few years back wasn’t exactly sitting in front of the television watching every MMA event he could get his eyes on.

“I had seen a few UFC fights but I wasn't a big fan of it,” he said. “I wasn't always watching it. I remember watching WEC and all that too, but I wasn't all into it. I didn't start getting into it until I started training and competing in MMA. That's when I really started watching fights and having people to look up to when it came to how I wanted to fight and stuff like that.”

You would then assume that Roberts wasn’t too star-struck when presented with Jim Miller in just his 12th pro fight. That would be an incorrect assumption.

“I remember watching Jim Miller,” he said. “He's been around for a while. He wasn't one of the guys that I modeled my fighting after, but I've watched him fight. That dude's tough and it's going to be an amazing fight. I feel like me standing in that cage looking across from him, he's gonna bring out the best in me and I've got to go out there and make it happen.”

The first time he felt that way about an opponent, it was Russia’s Alexander Yakovlev, and that fight last November resulted in a three-round win for “The Predator,” so that’s a good omen for the San Bernardino prospect.

“I feel like those two guys were the most experienced guys who fought actual contenders and have been around in the UFC, so I definitely feel like that with Jim Miller.”

If he does leave Las Vegas with his second win in a month, that will be quite the statement for Roberts, especially with Miller being who he is. Roberts knows it, too, and he’s got plans for his future that he hopes to start making happen as soon as this weekend’s bout concludes.

“I'm coming in and I'm kicking this door down,” he said. “Whoever wants to be right in front of that door waiting for me, that's gonna be the first person that I'm going to. When everything goes smooth this week, I've got some guys from 10 to15 in the top 15 to call out and I'll fight any one of those guys. I'm ready to get to it. I feel like this is gonna be the fight that brings me out and makes me be the best me that I am.”

In other words, Roosevelt Roberts is taking a year many people want to forget and turning it into his best one yet.