"All fights have pressure, but now it seems like I have a lot less to carry on my back." - Rony Jason 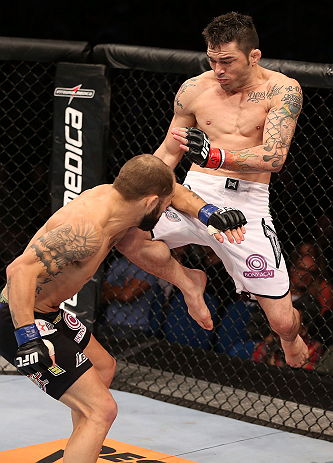 Winning The Ultimate Fighter show is always a pressure-filled endeavor for anyone in the long-running reality series. But truth be told, if you’re in the United States, not winning doesn’t necessarily mean a return to the local circuit or if it does, it doesn’t have to be a long wait before getting an opportunity to compete in the big leagues.

But when TUF traveled to Brazil for the first time in 2012, there was a distinct feeling that after the competitors had spent so many long years of fighting in relative obscurity, if they didn’t win, they were going back to that. In other words, winning TUF was a lot more life-altering than it was for most of the fighters in the States.

So when Rony Jason earned his spot in the featherweight final alongside Godofredo Pepey, the idea wasn’t to go out in a blaze of glory, but to get the win by any means necessary. And he did just that, earning the TUF Brazil 1 featherweight title by unanimous decision. All’s well that ends well, right? Well, not really, as Jason took plenty of criticism for not being exciting in victory.

His response? A second round finish of Sam Sicilia that earned him Knockout of the Night honors at UFC 153 last October, and a technical submission of Mike Wilkinson in June that took just 84 seconds. Guess that silenced the critics, eh?

“I wouldn't say I shut their mouths, but I showed what people expected from me,” said Jason through manager / translator Matheus Aquino. “Against Pepey, I knew about his submission power and I tried to become a champion, and so I was cautious. There was too much pressure. All fights have pressure, but now it seems like I have a lot less to carry on my back.”

With that pressure off his back and his spot in the organization secure, he’s free to fight his fight, and when the Quixada native is on, he’s a handful for anyone at 145 pounds. That’s something that’s becoming more and more apparent with each fight, but something diehard fans in Brazil have known about him for a long time, ever since the turning point of his career, a 2009 loss to Genair da Silva. Following that bout, Jason has yet to lose in nine consecutive fights.

“I'm someone who has never felt strong or better than other people,” he admits. “I have the problem of always thinking the other guys are better than me. I have always been good in finding qualities in others instead of flaws, so I started to discover myself, began to think that I could be as good as I thought my training partners and opponents were. That's why I always try to win where they are strong; that way it makes me feel like I'm strong too.”

With eight submission wins and four knockout victories, it’s clear that the 29-year-old can handle himself everywhere the fight goes, a trait that should serve him well this Saturday when he meets veteran Jeremy Stephens in Goiania, Brazil. The bout was originally scheduled for last month’s Fight Night card in Barueri, but an injury forced Jason out of the fight. Luckily, he’s healed up and ready to go, and the two will open up the main card. Jason admits that being tasked to kick the night off right can be a pressure-laden job, but that his ultimate goal remains unchanged.

“Even though I want to put on a show, I prefer to go out with the win,” he said. “We have a saying in Brazil referring to soccer that says ‘there's no ugly goal; ugly is not to score a goal.’”

Jason laughs, and his honesty, humility, and accessibility have made him a popular figure during his 17 months in the organization. And that feeling is mutual.

“I don't see the UFC as a job; I see it as a family, because I believe that there are people there that have a lot of reciprocity, caring and respect for me,” he said. “I'm a big fan of Burt (Watson), Stitch (Duran), Bruce (Buffer), among others, but I know that in order to keep them closer and closer I need to keep performing well in my fights.”

So I guess it’s safe to say life has changed a bit for Jason.

“There's no comparable sensation to being a UFC fighter, especially regarding people's recognition. Today I joke that before ‘everyone’ saw me as a ‘bum’ and now I'm an inspiration (laughs).”

An inspiration that can make a big move north with a win over a respected opponent like Stephens, something Jason isn’t even concerning himself with before the biggest fight of his post-TUF career.

“Honestly, I haven't thought about that (the future) yet,” he said. “If I did, I think I would go crazy because to me everyone is a top 10 in the weight class. The UFC picks their fighters from a big selection, so I prefer not to think about it. I think about doing a good fight with Jeremy. I never ask for the victory, I always ask not to injure my opponents and not to leave injured, because my opponents go through all the suffering that I go through, be it with the diet or the training camp, and it would be unfair to ask God for a victory for me and a defeat for him. We're all sons of God, fathers and workers.”