Ronnie Lawrence has been living with a sour taste in his mouth since the end of July, when he was forced out of his sophomore appearance inside the UFC Octagon at the 11th hour after medical issues arose during his weight cut.

“That was super-tough,” said Lawrence, who finally returns to action this weekend at UFC 271 against local bantamweight Mana Martinez. “I didn’t have the platform to reach enough fans to explain what happened — it was just ‘Ronnie Lawrence didn’t make it to the scale’ and that looks bad.

“I didn’t do anything different, I wasn’t slacking, and I’m not that big of a bantamweight,” added the Tennessee native, whose body cramped up as he climbed out of the bathtub, resulting in a trip to the hospital, several IVs, and one scuttled fight. “I was on track to make weight easy — my body just failed that time.”

A bout with COVID followed soon after, and while he hoped to return in December, a matchup never materialized, resulting in Lawrence heading into this weekend’s contest coming off almost a year on the sidelines.

“I was really hoping I wouldn’t have to wait a year,” he said with a laugh. “My goal was three fights last year and I was on schedule for trying to squeeze three in because I would have fought in July, stayed healthy, and tried to fight in December, but after catching COVID and all that, I’m definitely ready to get out there.

“I hate when I don’t fight for over a year because it’s almost like the nerves are almost brand new when you’re about to walk out. When you fight a couple times a year, it’s not as bad. I don’t really understand why, but that seems to be the case.”

After suffering the first loss of his career to current UFC lightweight Steve Garcia, he went more than two years before returning to action. He registered two victories in four months to get things moving in the right direction again, but then went nearly 16 months before stepping into the cage opposite Jose Johnson on Season 4 of Dana White’s Contender Series. 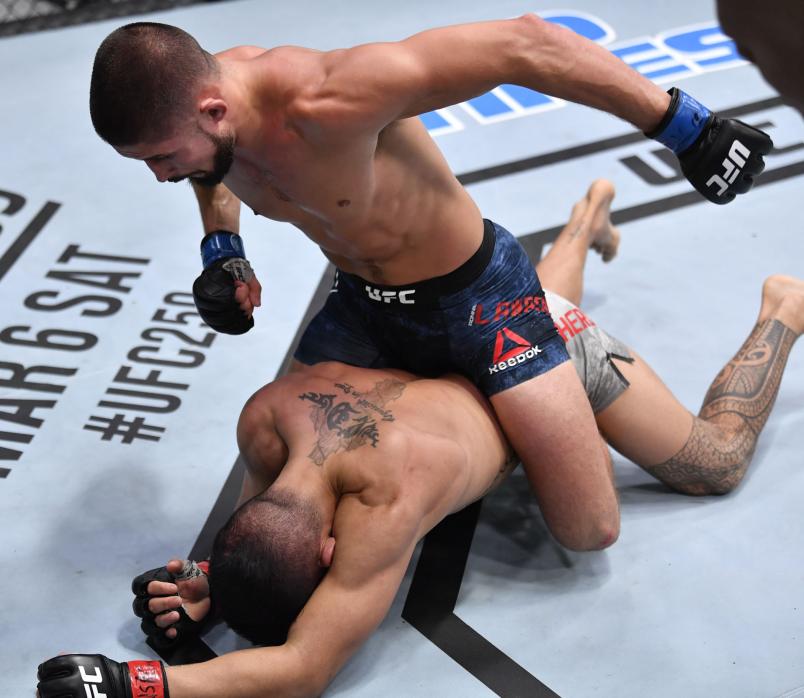 “I won’t know how the nerves are gonna feel until they walk out and look at me and say, ‘You’re on deck! You’re next!’” said Lawrence, who previously stated he felt more nervous ahead of his Contender Series appearance than he did his debut fight with Cachero. “That’s when I’m gonna know if it’s gonna be the same feeling as the Contender Series because there I was definitely like, ‘Holy s*** — this is happening.’

“I’ve had so many long layoffs for life, opponents backing out, injuries, et cetera throughout my career, so at least it won’t be something I’ve never felt before if I do get that feeling. We’ll see if that’s what happens.”

In addition to eagerly anticipating Saturday’s clash with Martinez because it’s been too long since he last was able to compete, Lawrence is also champing at the bit to get in there because the 29-year-old operates with a clear sense of urgency when it comes to his career.

“I haven’t been in the UFC too long and I’m only getting older, so I gotta gain some ground, get some respect, and start trying to get towards the rankings because our window is only so big,” said Lawrence, who trains with the all-star cast of coaches and fighters assembled at Sanford MMA in Deerfield Beach, Florida. “I got into the UFC later than I would have liked to have gotten here, so I need to start gaining ground before I start feeling old.”

When I joked that his worrying about feeling old makes me, someone more than a dozen years his senior, feel ancient, he laughed, but quickly reiterated that his window is limited, which makes his frustrations with spending a year on the sidelines all the more understandable, and his urgency to get back in there clearer.

Even though he’s trying to plot an expedited route towards the rankings, the thoughtful and articulate bantamweight knows that Saturday’s bout is of paramount importance and that the difference between winning and losing often comes down to a matter of inches, not yards.

“I focus on the fight at hand and make sure I get this one out of the way before I get too far in my head about everything else,” answered Lawrence when asked about balancing the here-and-now with his bigger picture plans of climbing the divisional ladder at an accelerated pace. “It’s good to plan ahead, but I don’t get too far ahead. I gotta get this one and get to the next one afterward.

“If you fight three times a year, you get three nights to show up and you have to weave the perfect performance,” he added. “If you move one inch the wrong way, it could be a bad night for you.

“I feel like losers lose and winners win, but in a game like this, it’s a real fine line between winning and losing, especially at the highest level.”

In order to give himself the best opportunity to come out on the victorious side, Lawrence opts to constantly be in the gym working on things, learning new techniques, and staying in shape rather than breaking the year up into designated fight camps.

When a bout does come together, the focus shifts to more opponent-specific training — working through scenarios that might present themselves in the cage, learning techniques that might come in handy on fight night, developing counters to his opponent’s strongest skills and weapons.

But mostly, he’s preparing to face the absolute best version of whoever is going to be standing across from him when the cage door closes. 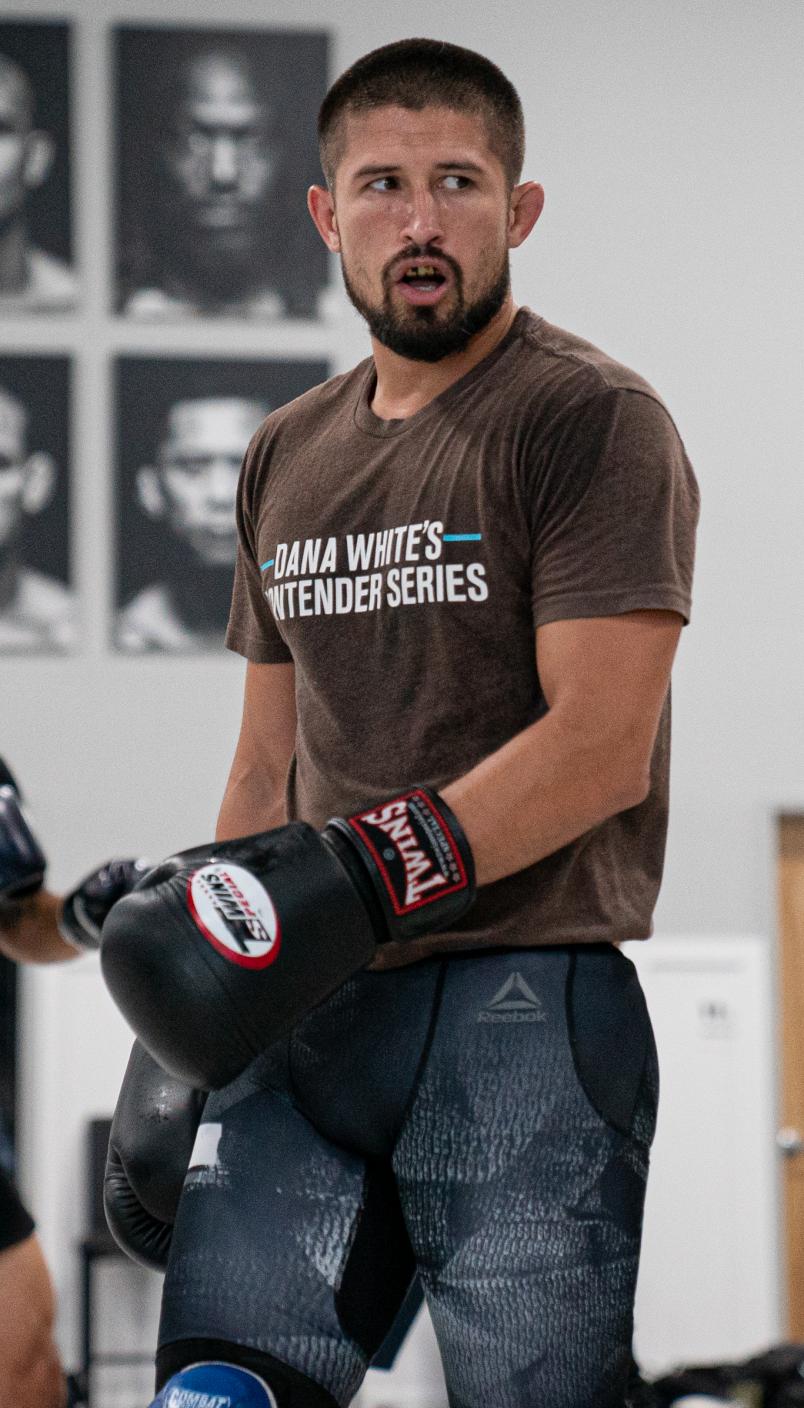 This time, that is Martinez.

“Everyone has a different way of how they do their things, and I just kind of game plan and focus my learning strategy and fighting towards my opponent and his style,” explained Lawrence. “His last fight, it’s hard to take too much from it because he took it on short notice and he was dealing with some things from his coach passing, but he was also fighting an opponent that is on quite a losing streak and has a weird style himself.

“You can try to take something from it, but all I can do is prepare as if he’s going to be the greatest he’s ever been.”

And after nearly a year away, how’s it going to feel to get out there, beat the best version of Mana Martinez that has ever graced the Octagon — in his hometown, no less — and get your hand raised in victory?

“I’m definitely gonna be happy because I didn’t even get the opportunity to win or lose last time,” offered Lawrence. “It’s gonna feel great.