"I feel like I still have more to prove to myself. The thing
that gets me up in the morning is that I’m really not ready to see
someone that I know I can beat holding my belt." - Ronda Rousey 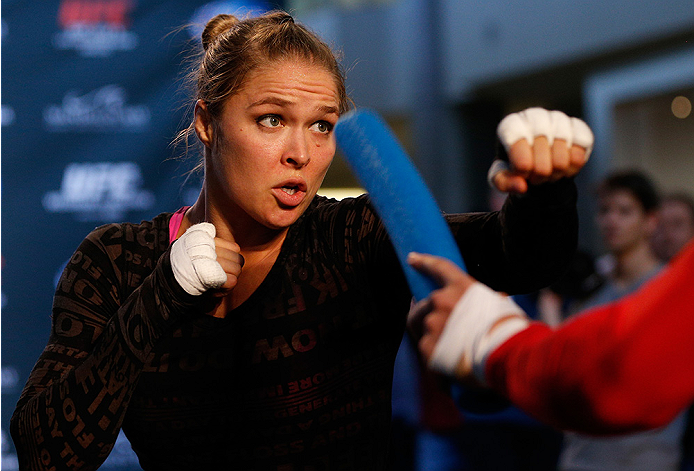 There was no crying in judo. No sick days, no time to sit back and smell the roses either. If you competed on the international level like Ronda Rousey did over the course of a career that put her on two Olympic teams and earned her a Bronze medal in the 2008 Beijing Games, you showed up to work, no matter what.

“There were so many World Cups throughout the year and there really wasn’t an off-season,” said Rousey. “You were just constantly fighting, and regardless of what your situation was, you had to make it work. I fought in the Pan Am championships in 2007 with my knee locked into place from a torn meniscus and I just had to show up and do it. There was no other option. There were days when I was sick, days when I was injured, days where a guy just broke up with me, and I fought in high pressure situations with every single emotional situation in judo, and it really prepared me for this.”

“This” is life as the UFC’s first female champion and the face of women’s MMA. There is no disputing either fact, and with such roles, the days are seemingly endless, filled not just with training, but media obligations, photo shoots, video interviews, and even Hollywood movies. But somehow the 27-year-old Californian makes it work, and not just by barely scraping by, but by dominating her opponents night in and night out. And while some have snickered that once Hollywood started calling Rousey would abandon the sport, when she steps into the Octagon for her UFC 175 co-main event against Alexis Davis, it will be her third fight since December of last year.

“All these people think that I get a couple opportunities outside of MMA and I’m suddenly going to stop fighting, when I’m really the most active champion that they have,” said Rousey. “So silencing some of those people has been really satisfying. The more criticisms I hear, the more it makes me want to work and get to where people can’t say that anymore. I want people to struggle to find negative things to say besides ‘oh yeah, she talks too much.’ And that is kind of a compliment. (Laughs) I appreciate a good heel.”

What can you say about Rousey that is negative though? She fights whoever is put in front of her, she finishes fights, and she’s on her way to cleaning out the bantamweight division. Is she a talker? Yeah, but whatever comes out of her mouth is usually gold, and if you look past the bluster, she becomes one of the most fascinating figures in sports today. That’s no exaggeration either. Yet Rousey, despite her confidence in her skills, doesn’t believe she’s reached the top yet.

“I always feel like my work’s not done yet,” she said. “I feel like there are still enough people that don’t believe that (she’s the best), and changing the minds of all those people is still what gets me up. So I need people to doubt me.”

Are there still doubters out there?

“Yeah, they seem to know my Instagram handle,” she laughs, then once again ponders the question of what gets her up in the morning to do this after being so dominant for so long.

“I feel like I still have more to prove to myself,” she said. “The thing that gets me up in the morning is that I’m really not ready to see someone that I know I can beat holding my belt. And the day that I feel that my work is done enough that I can pass it on and let somebody take that task, when I finally reach the point where I can accept seeing someone that I know I can beat holding the belt after me, then I feel like I can give it up and move on. And I’m just not ready to do that yet.”

Definitely not on Saturday against Canada’s Davis, who may be the biggest threat yet to her crown as a jiu-jitsu black belt with the grit and determination to go to places a lot of fighters don’t want to. Rousey knows what she’s up against, and she’s quick to toss in some words of wisdom from her mom, AnnMaria De Mars.

“No one’s easy until after you beat them,” said Rousey. “Alexis is the only person that I’ve been arranged to fight that I haven’t beaten yet and so that automatically makes her the hardest fight of my life. And after I beat her I’m probably going to be saying that about somebody else.”

But will she go to those dark places if Davis is able to get her there?

“I’m definitely prepared for a war like that,” said Rousey, who then switches gears to talk about another combat sports star. “Floyd Mayweather is one of the few people that has the kind of style to be able to walk away from so many fights just unscathed. The guy doesn’t have a scar on him, he got his first cut in his 46th fight, and that’s real style. He was definitely prepared for a war when it came with Maidana, but he still tries to remain unscathed, and I love that model and I try to follow it.”

In other words, she’ll take the 30-second submission over a five-round decision any day, and who can blame her? If you can be that quick and devastating, it not only pads your bank account, but it adds even more to your mystique. And Rousey has plenty at this point with nine wins, nine finishes, and no losses. She even added her first knockout in February when she halted Sara McMann in 66 seconds, showing that there’s more to her than armbars.

“I strike more than anything else,” said Rousey. “I haven’t put on a gi and done judo in like four years. I really just immerse myself in the part of the game that I’m missing in order to feel comfortable in it. I think that’s one of the reasons why I was able to beat McMann. In her training, she stayed with what she was comfortable with, she wrestled a lot. And in my training, I focused a lot on the striking and the wrestling, and I didn’t do any judo. I know I’ve got the judo down; it’s like riding a bike. It’s not going to fall out of my brain.”

But if Ronda Rousey has a secret to her success, it’s that for every fight, she may be training, in essence, to beat herself.

“I study my own footage more than my opponent’s because I really try to dissect how I would beat myself and what’s missing with me,” she said. “I work on that more than worry about what they may do.”

And only she knows what will crack the Rowdy Ronda code, but when it comes to that, she’s not talking.