Photos by Jeff Bottari
UFC Photography Coordinator
This UFC 190 challenge was intended to be Ronda Rousey’s “Rocky IV” moment: She would come to enemy soil and destroy a blasphemous opponent, undefeated Brazilian bantamweight Bethe Correia, who has insulted everything she is about. But the narrative would change once Rousey arrived in Rio de Janeiro. Brazil would not challenge her. It would embrace her, and Brazilians clamored to claim Rousey as one of their own.  All at once, this latest title defense became another validation of what Rousey’s legacy as an athlete and international icon is becoming. “It’s really been an eye-opening experience,” Rousey admits. “I’m going to accept and be whoever the fans want me to be, because it’s for them. This is about me and my legacy, and for them and their enjoyment.”
Wednesday, July 29
12:32 PM
Entourage, Rio Style: After a late wakeup (11:45 a.m.), Rousey quickly gets herself together, coffee in hand, and makes her way through the lobby of the Sheraton Rio Hotel and Resort to the van that will take her to the UFC 190 open workouts at Pepe Beach in the Barra section of Rio de Janeiro. She’s accompanied by coach Edmond Tarverdyan (L) and nutritionist Mike Dolce (middle). 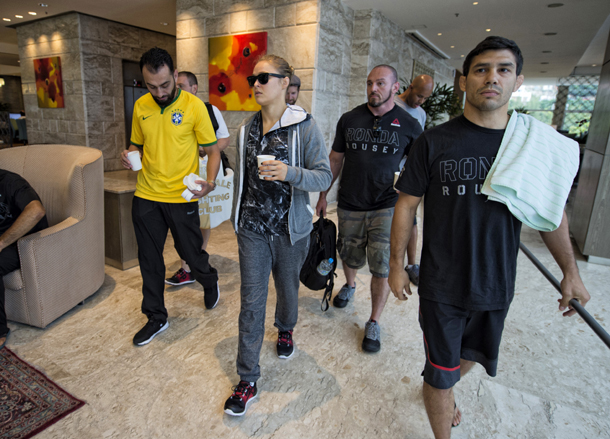 12:33 PM
As she exits the hotel to board the waiting van, Rousey is stopped by an eager Brazilian fan wearing a shirt bearing her likeness. Security intervenes, but she waves them off and poses for pictures. “I don’t want to feel like I’m letting anyone down,” Rousey says about the fan expectations. 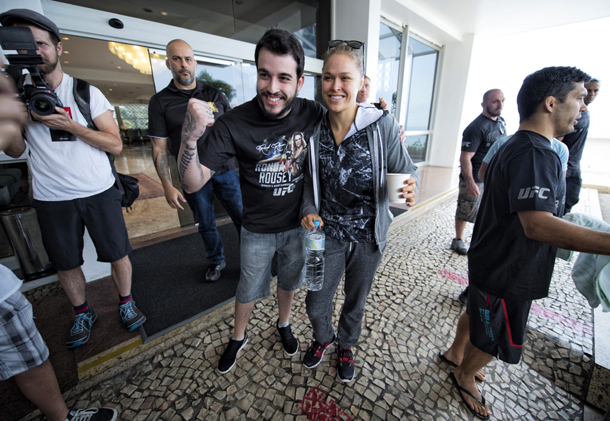 12:36 PM
Anticipation sets in. Invigorated by the fans’ welcome, Rousey takes her seat in the front of the van, exhales and breaks into a huge smile. 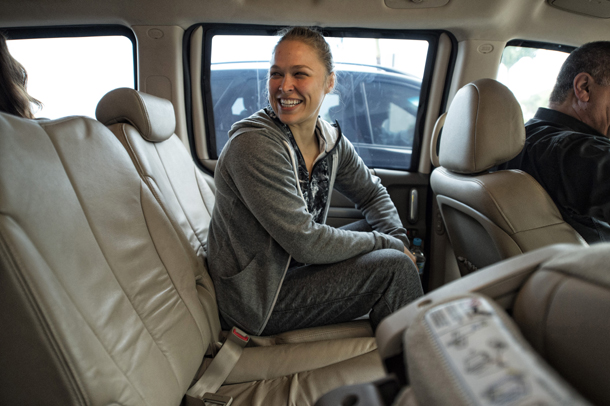 12:43 PM
As part of their pre- hand wrap ritual, Tarverdyan cradles Rousey’s head and neck and administers a soothing massage treatment, speaking words of motivation in soft tones. Rousey sits very quietly, absorbing it all. Then he begins carefully wrapping her hands and wrists in preparation for the workout. She seems to feed off his calming strength. 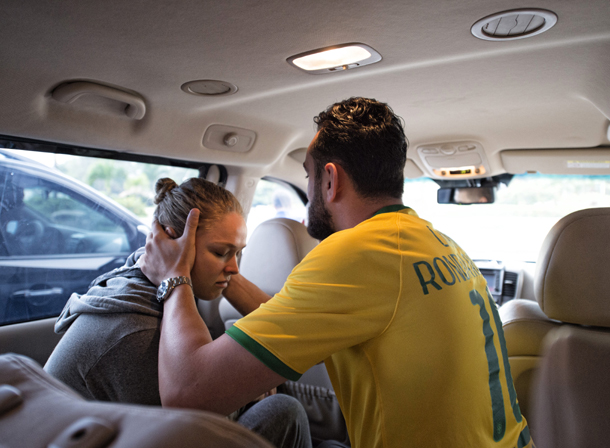 12:54 PM
Tarverdyan asks for a Sharpie pen. He takes her right hand and writes “MY LOVELY,” across the wrap, and “FATHER” across her left wrap. The message is a tribute to her late father, Ron. As the van lurches around the winding Avenida Niemeyer, a highway that clings to a mountainside with the ocean below, Tarverdyan applies Vaseline to Rousey’s hair to keep it in place during the workout. 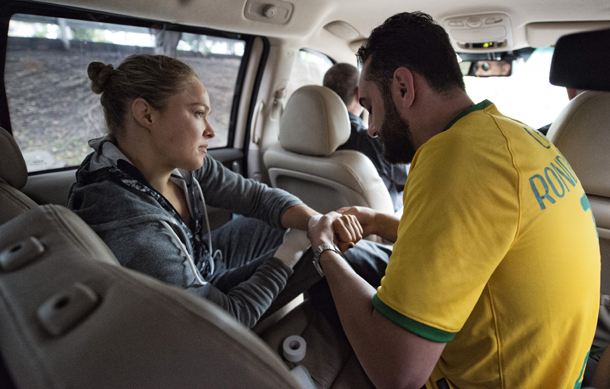 1:03 PM
After stepping out of the van, Rousey gets a first glimpse at what would be an enormous crowd reception at Pepe Beach in Barra. Security has to scramble to keep up with the task of getting her safely to the workout area, as screaming fans begin to swarm around her.
Nos. 7 and 8 (fist bump with Shogun; pep talk with Tarverdyan) 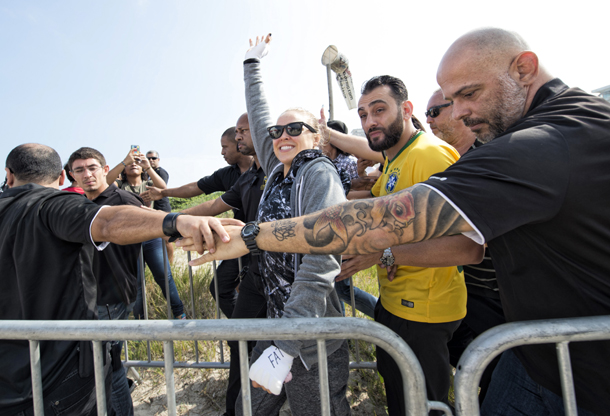 1:09 PM
While Brazilian legend Antonio “Big Nog” Nogueira finishes his open workout on the stage near the beach, Rousey preps inside the crowded green room set aside for the fighters. She’s up next. As the anticipation builds inside and outside the room, Rousey smiles and jokes, and she exchanges fist bumps with Shogun Rua, who is clearly a fan. 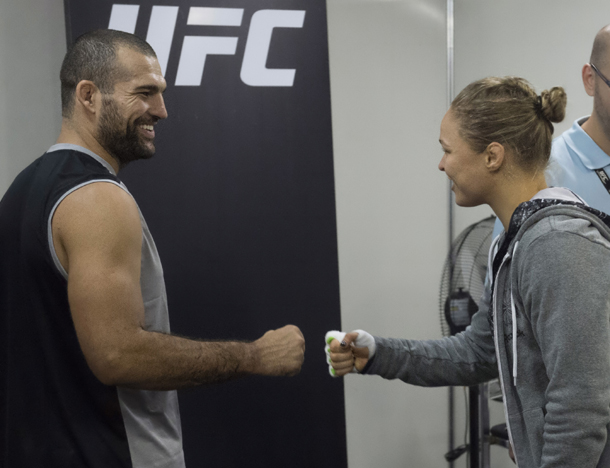 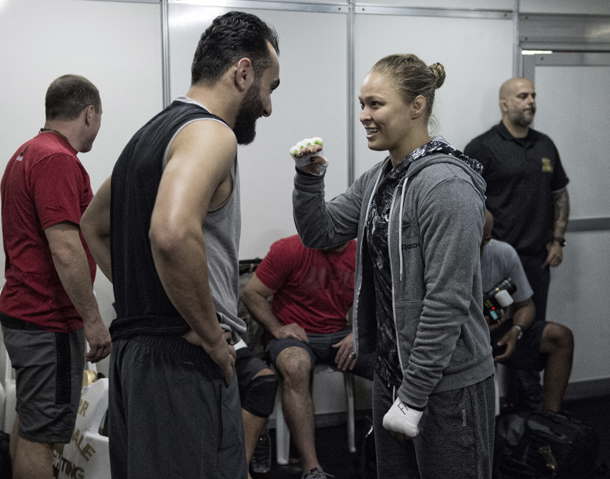 1:42 PM
With samba music blaring, a 10-minute open workout stretches well beyond the allotted time. Rousey quickly warms up, moving from stretches to jabs to full punches and exchanges with Tarverdyan. The stage is surrounded by screaming and cheering fans, and as Rousey throws another training partner to the mat, the chants and roar are deafening. As the crowd noise grows louder, Rousey bursts into smiles and laughter. 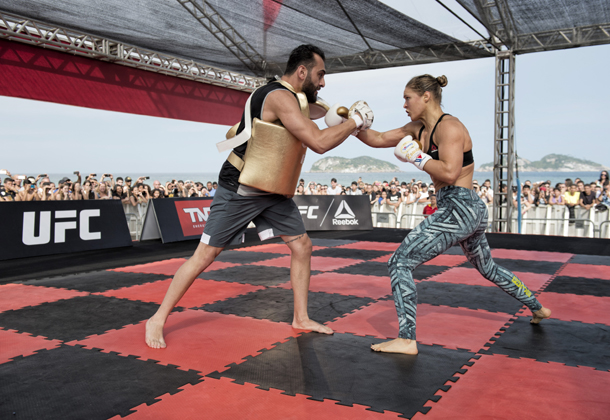 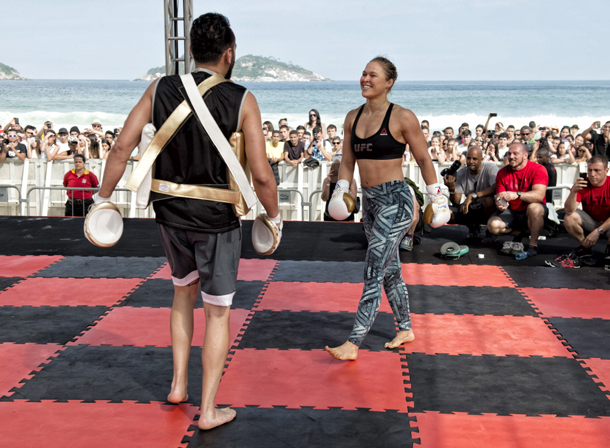 2:00 PM
Overwhelmed by the raucous fan reception, Rousey leaps past the UFC security team, jumps off the stage and into the arms of the crowd -- literally. She spends more than 30 minutes shooting selfies, hugging necks, shaking hands, signing autographs. Tears are flowing. Rousey and her fans are overcome with exhilaration. It’s an intensely emotional scene. 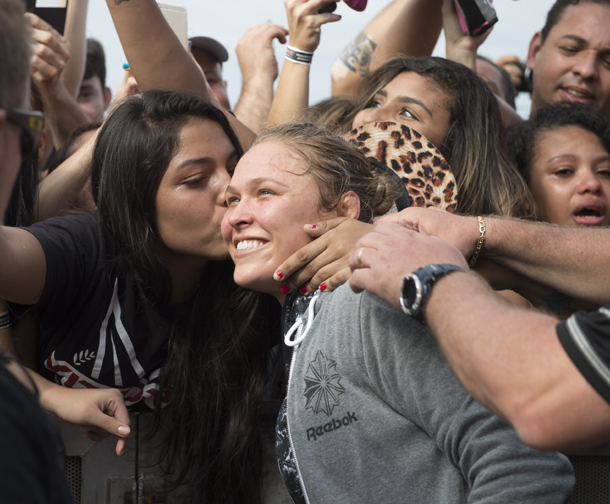 2:34 PM
Back in the green room, Rousey reflects on what just happened. Outside, the media wait. She poses with her hand wraps and explains the messaging on them to reporters. They surround her with cameras and microphones and Rousey is beaming and energized. Before they depart back to the UFC hotel, she and Tarverdyan decompress a bit. It’s been an overwhelming afternoon. 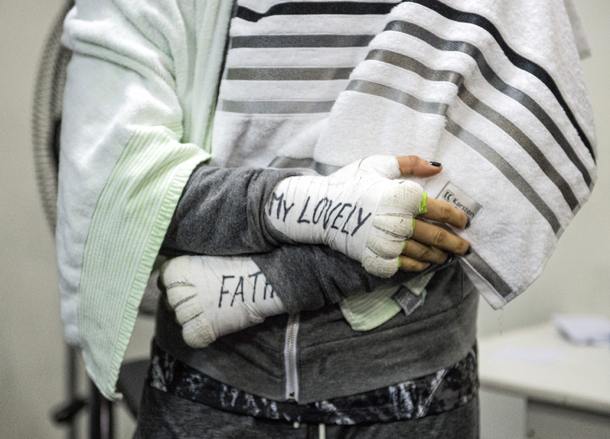 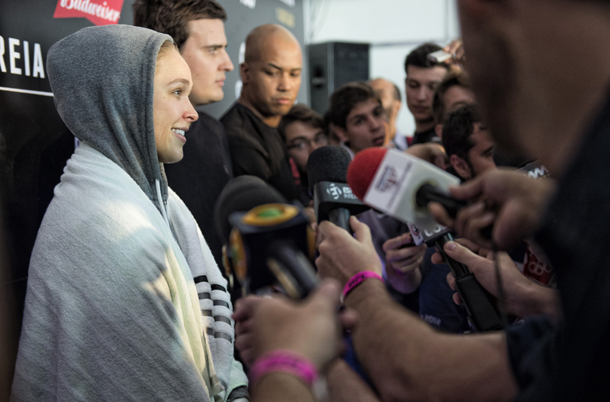 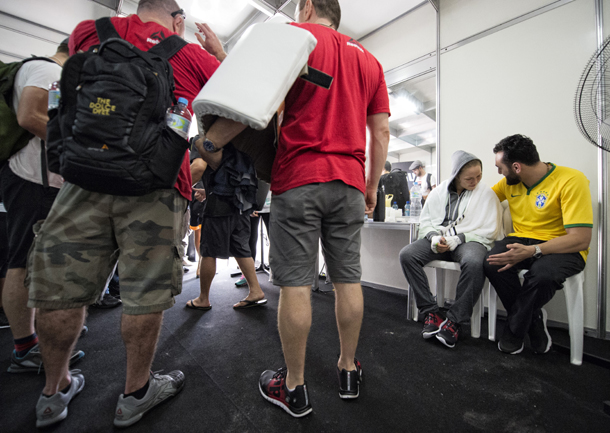 2:51 PM
Tarverdyan clears the way back to the van as the group peels away from another mass of fans. The ride from Barra back to the hotel will take almost an hour, but the time seems to fly. Everyone is elated after the open air beach workout and rejuvenating fan reception. 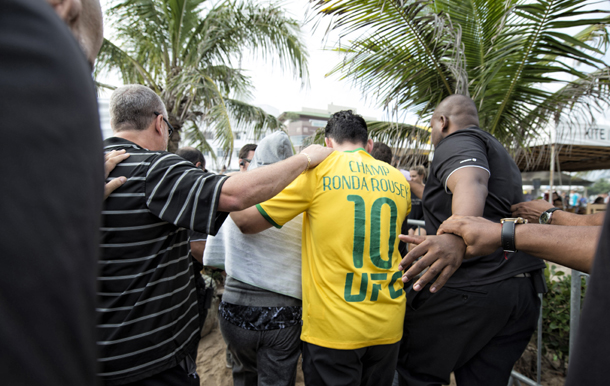 8:06 PM
After a brief rest, Rousey – still in pajamas – conducts a live Skype interview with FOX Sports 1 “UFC Tonight” commentators Daniel Cormier and Kenny Florian. Asked if she would be interested in fighting Cris Cyborg at a catch weight of 140 pounds, Rousey says, “No. I’ve said many times before that I’m the 135-pound champ and I’m not going to make any moves for anybody, because I’ve got nothing to prove. She’s the one that’s the fraud and the one caught doing steroids. And she’s the one who needs to prove that she can fight clean. If you can make 145 pumped full of steroids, then you can move down without them.” 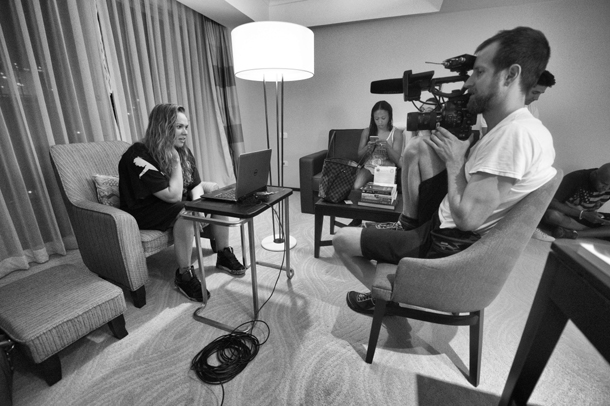 8:29 PM
After the FS1 obligation, Rousey greets the Brazilian publisher of her book, who has stopped by her room. He’s brought copies of “Ronda Rousey, Minha Luta, Suha Luta” (My Fight, Your Fight), and Rousey gets her first look at her memoir published in Brazilian Portuguese. 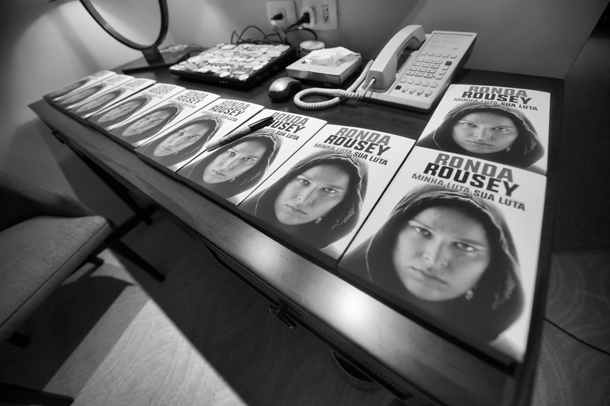 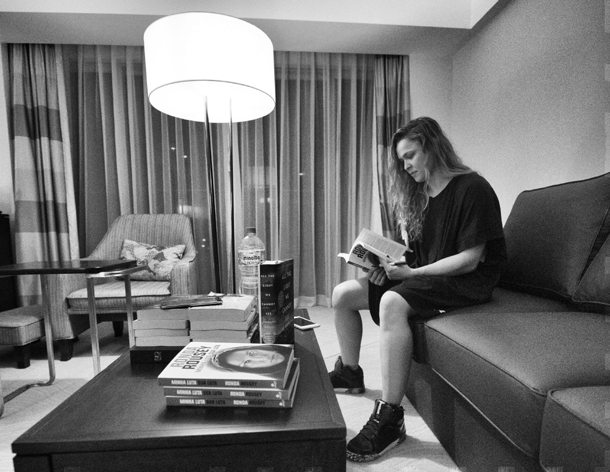 
12:44 PM
Back to business: Thursday means more media obligations, and a first fight week encounter with Correia. After an hour-long media day interview scrum, Rousey squares off against her UFC 190 challenger. They stand face to face and Rousey’s stare burns like a laser. The intensity and tension are palpable. 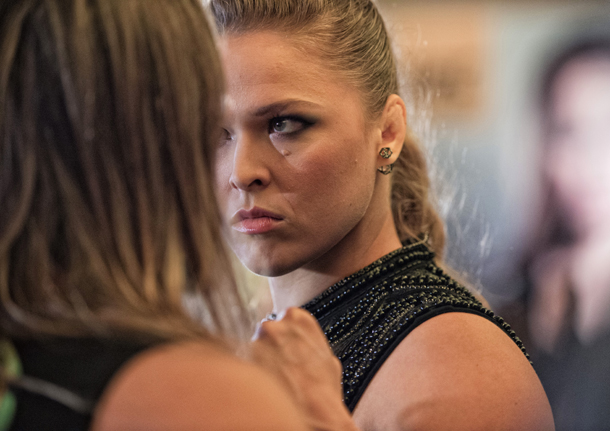 11:59 PM
This is where it hurts: Through all the adulation and star treatment in Rio, it comes down to basics. This is not a game. Rousey is a fighter, a warrior, and like all who prepare for hand-to-hand combat, she must make weight. Like everything she does, Rousey attacks the ritual head on. It’s never easy, but then again, that’s exactly how Ronda Rousey expects it to be. How she wants it to be. 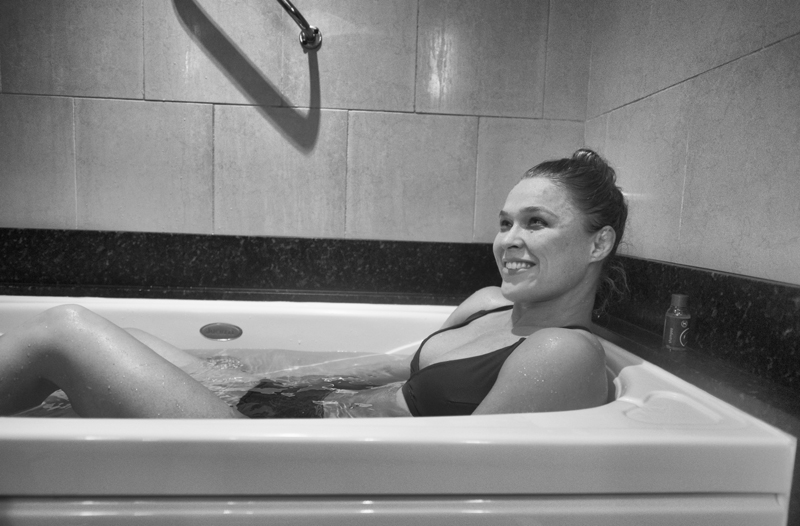