"I
don’t think I would be able to fight at the highest level that I can if
I just had an opponent and not a real challenge in front of me." - Ronda Rousey 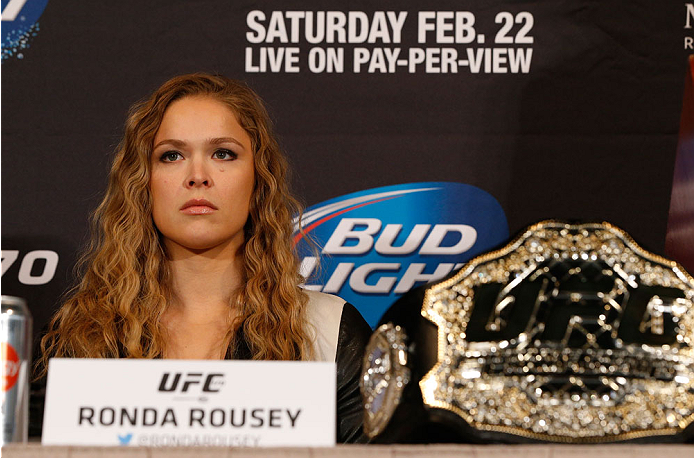 Ronda Rousey is back home. She never really went away, but during the course of a hectic 2013 that included two title fights bookending work in two films and a stint coaching on season 18 of The Ultimate Fighter, you could have easily thought that the UFC women’s bantamweight champion was going to a) burn out or b) take the Hollywood route full-time.

Instead, Rousey successfully defended her title for the second time, defeating Miesha Tate in the third round at UFC 168 in December, and then accepted a fight that will take place this Saturday, just 56 days later, against Sara McMann in the main event of UFC 170. And frankly, she doesn’t sound happier or more relaxed these days.

“For the first year that I was doing MMA, I had six fights,” said Rousey, who clocked three amateur and three pro fights in 2010-11. “I spent too much time between fights last time and it felt like a big negative for me and I definitely felt the effects of it. So I’m much more excited to get back in there as opposed to having another long layoff.”

In 2013, Rousey fought Liz Carmouche in February and Tate in December, not exactly the schedule she wanted to keep, but TUF called and she answered, leading her into an almost daily grind of answering questions about her rival, a draining process which she’s relieved is over.

“It’s definitely a lot less stressful for me,” said Rousey. “Being that I was on a really long push between the two movies and the two fights, all without a single day of rest, it’s nice to have the next fight be a lot less effort when it comes to the media side.”

Well, that’s not the case, as Rousey is always in demand, but not having to talk about Tate is the upside of the promotion this time around for the Californian, even if she is doing the bulk of the media work given McMann’s more subdued approach to such matters. Yet even though there is no bad blood or heated trash talk between champion and challenger this time around, this is still a compelling fight with a compelling storyline, as it’s the first meeting between two former Olympians in the Octagon, with Rousey picking up a Bronze medal in judo and McMann earning a Silver medal in freestyle wrestling. Yeah, this is a big deal.

“This is definitely a historic event in itself, and it’s awesome that it’s happening during the Winter Olympic Games, having two undefeated Olympic medalists fighting,” said Rousey. “It’s very hard to get just as motivated for the same goal twice, so upping the ante with every single fight keeps me motivated and focused. I don’t think I would be able to fight at the highest level that I can if I just had an opponent and not a real challenge in front of me.”

The unbeaten McMann is definitely a challenge, not just from a physical and technical standpoint, but because like Rousey, she knows what it’s like to perform on the elite level in her sport, so she won’t be awed by the bright lights of a UFC main event.

“I don’t think there are many higher pressure situations than fighting in the Olympics, and once that you’ve been in that kind of situation and been able to perform under it, something like a UFC title is not going to seem as scary as it would be to somebody else,” admits Rousey, who answered plenty of questions in her last fight with Tate, proving that she wasn’t frightened about going past the first round for the first time in eight fights. No folks, she didn’t explode when the bell for the second round sounded. Or the third for that matter.

“I felt way better in the third round than in the first or second,” she said. “I’ve always opened up more as the fight’s gone on. Even when I was a kid doing judo, me and my mom would call it first round-itis, where the first round was my worst and I had to get warmed up and going. And I really felt that by the third round, I was settling down a lot more and becoming a lot more disciplined and I was just relaxing. By the time the third round came, I just really accepted it like, all right we’re going five, and I was ready for it. But I think that once Miesha saw the second round was harder for her than the first, she was more broken down by the third, where I was ready to go five.”

In the third, she finished Tate the way she has ended all her fights, via armbar. Yet while the ground game has always been her bread and butter, we’ve been seeing more of her stand-up attack in the gym, primarily focusing on the sweet science of boxing. And she loves it.

“Boxing is new for me, and it really requires so much of my focus and attention,” said Rousey. “I got to the point in judo where I wasn’t learning anything new anymore; I could figure out how to do something better that I already knew, but it wasn’t like I had any entirely new concepts that I had to grasp, so boxing really captured my imagination and enthusiasm again that I thought I lost just doing judo. I really have to thank boxing for invigorating my enthusiasm for competition again.”

So would she ever want to test herself in the ring? You know the answer already, don’t you?

“I would really love to compete in boxing,” she said. “But time is the hardest thing. I thought at one point, I should just try to win the world championships of everything. (Laughs) I wanted to win the boxing world title, the jiu-jitsu Abu Dhabi title, I wanted to win in MMA and judo, and in every single category I wanted to be the best because I knew that had never been done before. But at the time when I was thinking about that, I never thought that Hollywood would come calling and that would be another demand on my time. I have so many goals and not enough time to achieve them all. Maybe one day, but we’ll see.”

First on the plate is Sara McMann, and Rousey is all in for this fight. After that, who knows, but she promises that it will be a year to remember. Yet haven’t they all been since we’ve been introduced to Ms. Rousey?