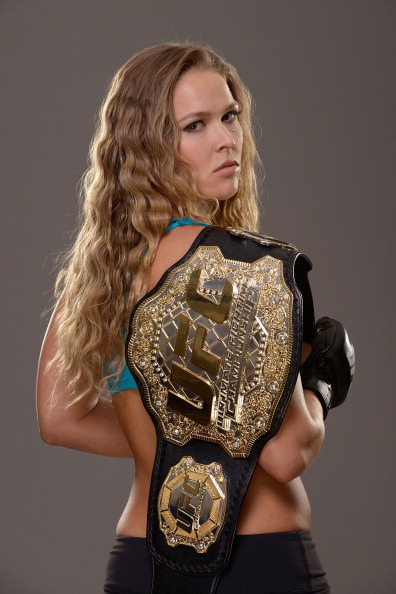 “No one’s ever going to be you better than you can.”

The words from the mouth of Ronda Rousey are in response to a question regarding talk of her being a female and modern day version of a prime Mike Tyson. In many ways she is. There is a sense of menace every time Rousey sets foot in the Octagon, a pull that she has on people where you can’t look away when she fights, and an idea that no one, anyone, can beat her.

But at this point, Rousey may have already transcended what Iron Mike did in those years before Buster Douglas shattered his aura of invincibility 25 years ago this month.

Charisma. Determination. Looks. Skill. Talent. You list these in alphabetical order because none is more or less important than the other, and Rousey has them all. As she prepares to defend her UFC women’s bantamweight title for the fifth time against fellow unbeaten Cat Zingano in the main event of UFC 184 at STAPLES Center in Los Angeles on Saturday, she is someone who can’t be described as “the next” this or “the female version” of that. She is the first and only Ronda Rousey, and that’s just the way she likes it, even if she does has plenty of respect for those, like Tyson, who came before her.

“I try to think about having my own thing,” she said. “There are people that I respect and admire and try to mold myself after as an athlete, but no one’s going to be able to have his (Tyson’s) style better than he had it, because it was his. He’s definitely one of the inspirations and people that I pull from. But I can have my style better than anybody else.”

There are certainly no one close to matching it, not through ten pro fights, ten wins, and ten finishes. Yet while the 28-year-old former Olympic Bronze medalist is supremely confident, with the word “lose” not even in her vocabulary, she is at the same time very respectful of her opposition, even if she doesn’t believe any of them will take her belt away.
> Watch Ronda Rousey's past fights

“Every single one of those girls has that,” Rousey said when asked if there is anyone out there to test her. “It’s just that I don’t allow it. I’m more prepared than them and I work harder than them every single day. My absolute worst day is better than their best. They all have the potential, and anything can happen; it’s just that I obsess over this and this is all that I have and I’m so much more prepared for every single situation that there is no right answer for them. It’s just like solving a problem – I follow the train of thought of the fight all the way to the end, and whatever they do just digs them into a deeper hole. They try to think ‘what is the answer to the Rousey Question,’ and I hate referring to myself in the third person (Laughs), but I’m quoting people. And there is no right answer. And every single girl comes out with her own puzzle and a new set of answers, but I’ve run through the questions and the answers so many times that there’s no answer that they have that I haven’t seen before and that I’ve had a response to.” 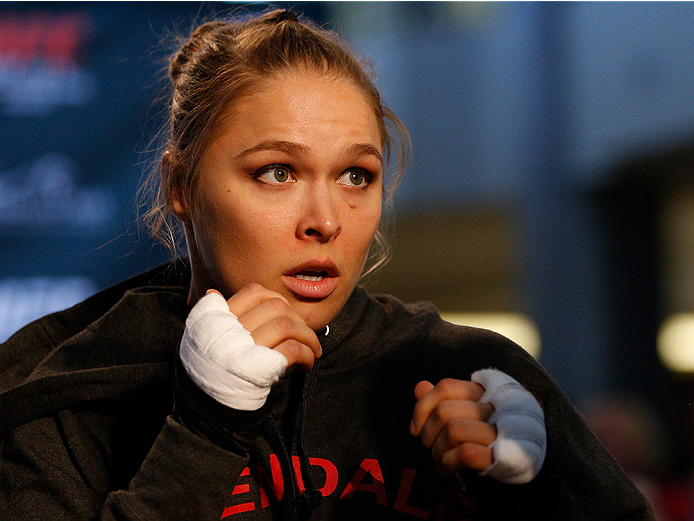 Puzzles, questions, answers. It’s like a math class instead of a fight, and Rousey likes it like that when it comes to presenting problems to her peers that they’ve never seen before. Technically, her grappling is flawless. Her stand-up is approaching that level, and when it comes to finishing fights, a 100% rate can’t be argued with, especially when your opponents include Miesha Tate, Sara McMann, Liz Carmouche, Alexis Davis and Sarah Kaufman.
Maybe that’s the difference, the idea that there is no winner or loser unless that winner finishes the loser. As a pro or amateur, Rousey has never heard the final bell, and she doesn’t intend on starting now.

“It’s called as real as it gets for a reason,” she said. “This isn’t like ‘hey I have a ball, and you want the ball, and I’m going to put the ball over here and you better stop me.’ It’s not some made-up thing that we’re trying to accomplish. It’s the oldest sport in the world, and it’s ingrained in human nature. There is no instinct in people to play soccer, but there is an instinct to fight. And I can’t treat it like a sport because it’s not something made up.”

The most compelling thing about Saturday’s bout is that Zingano shares that attitude. As the challenger told me in a recent interview for UFC magazine, “These fights are real; it’s not a sport to me. I don’t like going out there and dancing and timing and checking out what everybody else has got. I’m trying to finish them, and I’m trying to show myself that I’m indestructible. It’s very real to me. I don’t know how else to describe it. It’s self-defense - me using these disciplines that I’ve learned to not be hurt by someone and to hurt them in return instead.”

Rousey can relate to everything Zingano says and agree with it, but when I ask the champion if the Coloradan is the first opponent she’s faced to share that same “kill or be killed” attitude, Ronda strongly disagrees.

“No, because Cat can’t afford to (have that attitude),” Rousey said. “She has a little boy at home and she has to go home to him at the end of the day. She’s said before that what was on her mind is she wanted to get out of there and go home to her little boy because there’s someone outside of the Octagon that needs her. And there’s always going to be that thing in the back of her brain that she has to save something of herself for him. And I don’t have that. I’m needed nowhere else. There’s no one at home waiting for me. So I can afford to have that attitude, where she can’t. And that’s why I know I’m willing to go in and want it more.”

That’s Ronda Rousey’s difference. Yes, "kill or be killed" is a figure of speech in the fight game and not a literal statement, but she approaches each fight as if it's her last. Forget the armbars, the judo throws, the rapid-fire combinations. What separates the Californian from the rest is her belief that nothing is more important than what happens when the referee calls her and her opponent to fight. She’s leaving nothing for the ride home, and while such an approach to the game can be chilling in some aspects, it makes you want to watch her even more. How does she manage that in a world that has become progressively jaded and uninterested in anything that takes more than 140 characters on Twitter? 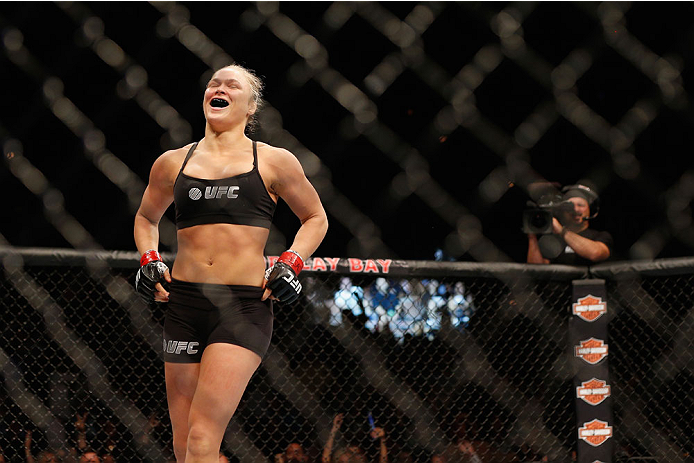 “I don’t know,” she laughs, her ability to go from being one of the most intimidating figures in the fight game back to Ronda in the space of seconds amazing in and of itself. And the reason why is that she remains real through each aspect of her personality. This is who she is, and it’s why Hollywood calls, why Sports Illustrated put her in this year’s swimsuit issue, and why the phone never stops ringing. And unlike some, Rousey takes the majority of those calls and opportunities, not as a ‘strike while the iron’s hot’ thing, but as a living life to its fullest thing.

“Ambition itself is something that you should aspire to and not doing just enough so that you can finance you sitting on your ass,” she said. “If I made more money than I could spend already, I still wouldn’t feel like I was done. I feel like too many people are trying to make just enough so they can do as little as possible. I was devastated when this fight (with Zingano) got pushed back because I felt like there was another chunk of time where I was in my prime when I wouldn’t be able to accomplish as much as possible. I had to drag out one accomplishment longer instead of stacking on several more. I enjoy what I do. I don’t do what I do so I can sit around and watch prime time television.” 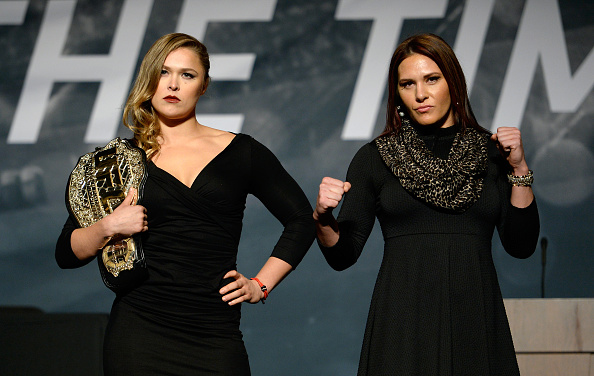 Enjoy her while she’s here, because Rousey won’t fight forever, and we aren’t likely to see anyone like her anytime soon. But for the woman with an answer to every puzzle thrown at her, the million dollar question may be one about what she leaves this sport. Dominance is great, but Ali had his Frazier, Gatti had his Ward, and Griffin had his Bonnar. Does Rousey need that one great foil to complete her legacy, or would she be content with a final slate that looks exactly the same it looks now – not just unbeaten, but virtually untouched?

“Ideally, I want to be as efficient as possible,” Rousey said. “I’m a perfectionist, and I try to make every single fight the perfect fight. If I can manage to make every fight perfect, then I’m going to try to do that. But I know it’s a controlled chaos kind of sport and not everything’s going to be perfect all the time, so I just want to be as good a fighter as I possibly can. And if I can possibly come through untouched, that would be awesome. My aim is perfection. But if that doesn’t happen and I’m forced into a different situation, then I’m the one person in the world that can really deal with those situations and come out on top. I’m ready for everything but aiming for perfection.”
> Check out the full UFC 184: Rousey vs. Zingano fight card