Ron Stallings: Marching to His Own Beat 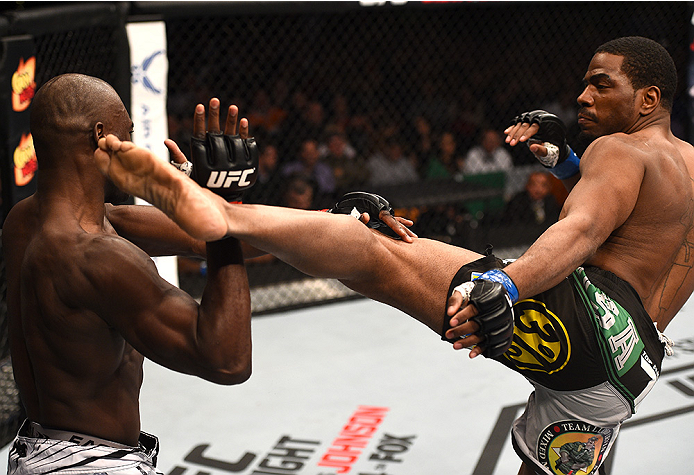 Like jazz music, mixed martial arts has a rhythm and sound that is often improvised on the spot.

Fighters can come in to a bout with a strategy and a game plan but when your game plan isn’t working, you’ve got to be able to jam to a different tune, and Ron Stallings understands this better than anyone.

“I’m a musician and I like to relate everything to music and rhythms of pattern,” Stallings said. “Most fighters look at this like a hurt game where they’re saying, ‘I’m gonna kill you.’ I look at it as an art form. I play jazz, and lots of instruments, so I’m able to analyze my opponent in a different way, and I’m able to go with the flow of a fight, just like jamming with a new band.”

UFC fans may not know much about the “ChoirBoy,” but the Team Lloyd Irvin pupil has been fighting for several years, and has an extensive professional and amateur record. He’s hoping for another chance at UFC glory when he faces Justin Jones at UFC Fight Night: Mendes vs Lamas April 4th at the Patriot Center in Fairfax, Virginia.

“I know nothing about this guy other than he’s human, he’s gritty, he’s got two hands and two feet,” he said. “I know he’s entering the UFC under similar circumstances with a short notice fight, so I’m sure he’s going to be looking to put on a good show too and get a W. My last fight I had an opportunity to really cut the line by taking on a short notice fight against Uriah Hall, and I was anticipating getting a victory and getting a fast track up the rankings, but unfortunately the doctor stopped it.”

The doctor stopped it after a gruesome cut above Stallings’ left eye, coming just 3:37 into the first round after a well-timed elbow by Hall.

Perhaps the eye cut was a blessing in disguise, because when fighters take fights on short notice, like Stallings did against Hall, they’re taking a calculated risk that could backfire.

On one hand, a call from UFC matchmaker Joe Silva presents an opportunity to showcase one’s skills to the world’s biggest MMA audience, but on the other hand, lacking a full training camp can produce some lackluster results in the Octagon, and most guys don’t get a second chance so quickly.

“I’m lucky,” he said. “The stakes are high and I like it like that, where both of us are like animals. You gotta show up. There’s no turning back. It’s time to perform. I like it when the pressure is on me like that. It makes me really step up to the plate.”

A well-rounded fighter, the 32-year-old says that he’s benefitted from coaches and a team that has every discipline covered by world-class athletes.

“I’ve been fortunate to work with guys who are way better than me,” he said. “Every day I’m training with guys who can kick my butt. That’s the best way to train, because once you know what it feels like you know you can deliver.”

Stallings mostly delivers on the feet, with a mix of boxing and Muay Thai skills, but is, as most Lloyd Irvin students, no slouch on the ground. Of his twelve wins, none have gone to the scorecards, with 6 submissions and 6 KOs on his resume.

This second shot in The Show comes at the right time, and to hear him tell it, it’s at once humbling and exciting.

“I’ve been doing this sport longer than most people, and for one reason or another I just never got the opportunity to shine, and time just happens,” he said. “You can’t stop time. You can wait for perfect timing, but there’s no guarantee it will ever happen. In all sports there are always guys who may be even better than the superstars, but they may never get their time to shine. And that’s always been a fear of mine. I know I have the skill set to be on the platform called the UFC, but what if that door never opens up? So even on short notice you just have to say yes, because it may never come again.”

In the 2014 movie Whiplash, a brilliant student drummer aspiring to be the next Buddy Rich is forced to endure mental and physical abuse at the hands of a hard to please teacher at an elite music school. After the student fails at many attempts to please the instructor and ultimately leads to the teacher’s dismissal, he is once again at the drums, where his instructor is composing a new piece, of which the student was never given the sheet music. After being humiliated and told to leave the stage by his former teacher, the student returns and starts a flawless rendition of “Caravan,” when the rest of the band joins in. At the finish, the former teacher simply nods his approval, but that’s all the student ever sought to achieve in the first place.

While Stallings is not subjected to mental abuse by any teacher, he is subjected to the rigors that come with being a mixed martial arts professional. If he can perfect his own version of “Caravan” in the middle of the Octagon on Saturday, perhaps he will get that nod from the fans, the UFC, his coaches, but most importantly, himself, and we will all be lucky to be witness to an athlete who has long strived to realize his dream.