Romero's fight Saturday as important to him as Olympics were

Following the bout that earned him an interim UFC middleweight title fight against Robert Whittaker this Saturday, Yoel Romero stood in the center of the Octagon with Joe Rogan and looked to the second level at Madison Square Garden.

Moments earlier, the surging Cuban had knocked out former middleweight champion Chris Weidman, catching the New York native with a flying knee early in the third to send the audience into stunned silence and seemingly cement his chance to challenge for the middleweight belt.

Watching the interview from on high was reigning champion Michael Bisping and, although he had broadcast duties on FS1, he wasn’t going to miss an opportunity to add a little early heat to a potential championship clash and play the heel once more. As the cameras cut to “The Count,” he offered Romero a thumbs down, followed by a pair of fingers extended skyward.

The opening non-verbal salvo had been fired and the presumptive challenger had the opportunity to respond.

Over the next couple months, Romero remained in hot pursuit of a middleweight title fight, taking shots at Bisping whenever he saw an opportunity and believing that it was only a matter of time before he would share the cage with the current champion and have the opportunity to claim UFC gold for himself.

Romero will get that opportunity this weekend at UFC 213, but it’s not against Bisping and it’s not for the undisputed middleweight title. Instead, the 40-year-old standout squares off with dangerous Australian Robert Whittaker in a co-main event battle for the interim belt.

It’s not the fight that he wanted, but it’s an outstanding and competitive fight nonetheless, and Romero is giving his current opponent his undivided attention.

“This is the most important fight right now,” he said of his meeting with Whittaker via translator. “How are you going to think about going to the 15th floor if you haven’t gotten to the 14th floor yet?

That may sound like nothing more than the exact comment you would expect from someone in the hours leading up to fight night, but you come to appreciate and believe Romero’s words more when you understand the how singularly focused he is on becoming world champion and continuing to hone his skills.

Romero was a late arrival to mixed martial arts, transitioning to the cage following a tremendous freestyle wrestling career that included reaching the podium at five different World Championships and earning the silver medal at the 2000 Summer Games in Sydney. After just six fights, he made his way into the Octagon, using his unparalleled athleticism and devastating explosiveness to quickly establish himself as one to watch in the middleweight ranks.

Over the last two years, he’s continued expanding his arsenal and adding to his resume, collecting victories over Lyoto Machida and Ronald “Jacare” Souza prior to defeating Weidman to position himself as the top contender in the 185-pound ranks.

“When I signed with the UFC, I was starting to learn and every time I would fight, I was learning in the fight,” said Romero, reflecting on his progression as a fighter. “Today, I’m still learning, but I’ve learned a lot.

“I’m blessed by God and I have a disciplined life; I don’t live a crazy life. I train, I eat healthy and I try to (make use of) every last minute that I have. I know I’m 40 years old; that’s why I try to focus as much as possible.” 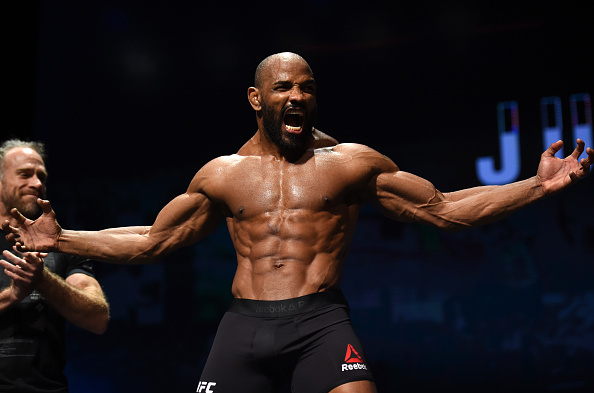 He also knows that this fight with Whittaker and whatever a victory may lead to is about more than just him – that family, friends and his community not only supports him in this journey, but wants to see him continue winning and reach the ultimate goal.

That’s a difficult burden to carry and one that Romero admits he feels the weight of heading into his meeting with Whittaker.

“I feel like I have a big cross that I have to carry,” Romero said. “I’m trying to prove to the people that I can make my dreams come true. When you put your body in God’s hands, anything is possible. I would like for everybody in the world to have a dream and to make sure that that dream comes true.

“This fight means a lot to my family,” he added. “A lot of my people wish for me to win this title: Miami wants it, Cuba wants it, my family wants it and my club wants it. This is as important as when I went to the Olympics.”