Romero, Maia and Holloway win at 194 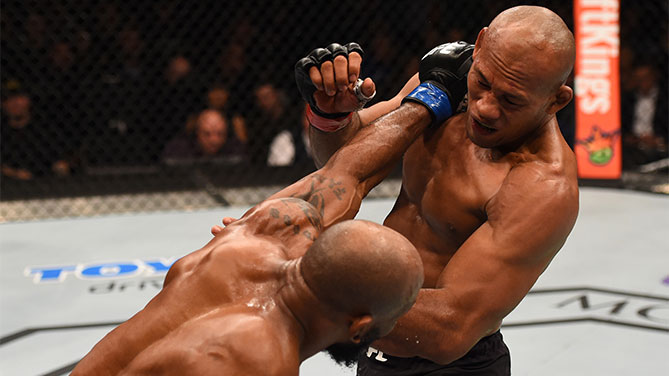 After a strong first round against Ronaldo “Jacare” Souza, middleweight contender Yoel Romero’s gas tank appeared to rapidly empty in the next two rounds of their pivotal UFC 194 bout at the MGM Grand Garden Arena on Saturday. But when the scorecards were read, it was the No. 3-ranked Romero who took the split decision from the No. 2-ranked Souza, perhaps cementing himself as the next challenger for the middleweight crown.

“I am ready,” Romero said. “I am ready for everybody.”

The first three minutes didn’t produce much action, as Jacare stalked and Romero moved effortlessly around the Octagon. That lack of action changed in the final two minutes, as a spinning backfist put Souza on the deck. Romero went all out for the finish, his ground strikes drawing oohs and aahs from the crowd. All the while, Souza was looking for submissions, and while he didn’t get one, the ever present danger that he could allowed him to make it out of the round.

With Romero winded and his mouth wide open, Souza looked to make it a ground fight, yet the Cuban’s strength kept him upright. That – and a blatant fence grab that earned him a stern warning from referee Marc Goddard. For the rest of the round, Souza kept stalking with little response from Romero outside of the occasional kick.

Midway through the final round, with the bout likely on the line, Souza finally landed enough flush punches to open Romero up for the takedown, and he got it. From there, Souza stayed busy with his strikes as he looked to score points and possibly get the opening to sink in a submission. He didn’t get it, and ultimately didn’t get the decision as well, a verdict that didn’t sit well with many in crowd. 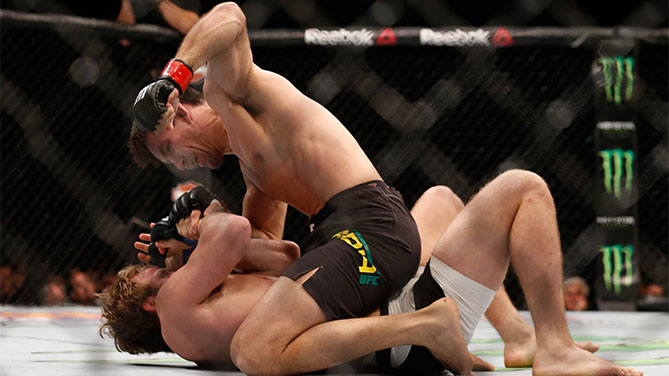 With one of his most impressive performances to date, 38-year-old Demian Maia appears to be getting better with age, as he shut out Gunnar Nelson in a highly-anticipated welterweight bout.

The unanimous decision read 30-26 and 30-25 twice for Maia, who won his fourth straight.

The two grappling standouts locked up almost immediately, with several heated scrambles resulting in Nelson nearly sinking in a choke. After Maia escaped, the bout went to the mat, Nelson in control briefly before Maia took over and took his opponent’s back.  Midway through the round, the fight went back to the ground, Maia in mount, where he fired off ground strikes until Nelson gave up his back again. More strikes followed before Maia went for an armbar, but Nelson was able to escape and land some punches of his own before the horn sounded.

Maia got a takedown to start round two, but Nelson reversed position and the two rose. Maia kept his grip on his foe, and he eventually wore the Iceland native and took his back again. The Sao Paulo product proceeded to pound away with strikes on the bloodied Nelson, and while “Gunni” got out of immediate danger, Maia took the top position once more, delivering more thudding strikes until the end of the round.

Remaining relentless with his takedown attempts, Maia resumed his dominant performance in the final round, with punishing strikes his main weapon. With 20 seconds left, Nelson did reverse position, but there wasn’t nearly enough time for him to do anything with it, leaving Maia the clear victor.

Top ten featherweights Max Holloway and Jeremy Stephens didn’t exactly set the MGM Grand Garden Arena on fire in the main card opener, but when the dust settled, Holloway was able to extend his winning streak to eight with a three-round unanimous decision.

The first round was a tentative one, with little significant action to speak of. Holloway was unable to find his striking range consistently, and while Stephens missed with his punches upstairs, he had success with leg kicks and in a pair of lockups against the fence.

Nothing changed in the second round, as the bout was fought at a glacial pace, with Holloway unable to land anything solidly, save a flush right hand late, while Stephens did just enough to score more points than his foe.

Forty-five seconds into the final frame, Holloway scored a much needed takedown and moved into side control briefly before taking his foe’s back. Holloway briefly got a rear naked choke in, but Stephens was able to break free. With a little over two minutes left, Stephens found daylight and got to his feet, and the Iowan tried to finish strong, but he wasn’t able to land the haymaker he was looking for.