Romero hoping to even score with Whittaker at UFC 225

If Yoel Romero evens the score with Robert Whittaker in their UFC 225 rematch on Saturday, “The Reaper” may have to get used to seeing the Cuban.

“I’m not against fighting him for a third time, or a fourth time,” said Romero through a translator. “I’ve done it several times in wrestling. In wrestling, I’ve had to fight five or six times with the same athlete. So I might fight Robert, three, four, five times. As many times as needed. That’s why I’m here. To fight.”

He smiles when he says it, and he means that statement and that smile. It’s a beautiful thing to find your niche in life, and while wrestling put Romero on the map when he won a silver medal in the 2000 Sydney Games, mixed martial arts made him a star.

Just check out his social media accounts, look at the Reebok shirt celebrating him, and you’ll see that he has become an unlikely crossover star over the last couple years.

“I am astonished at how people have accepted me,” Romero said. “The acceptance I’ve had from the people here in Miami, people know me wherever I go and they identify with me. I like interacting with people, chatting with people. And that communication between me and the fans, that exchange of energy, that’s beautiful.”

It’s that energy that may be the secret of Romero’s appeal. In the Octagon or out, there is an aura around “The Soldier of God.” On fight night, it manifests itself in explosive bursts of power that can end a fight in a split second. Outside of it, there’s an impossible to describe charisma to him, making him someone you can’t turn away from.

In other words, things could get even bigger for him should he defeat Whittaker, even if he can’t take home the middleweight title after missing weight on Friday at 185.2 pounds. 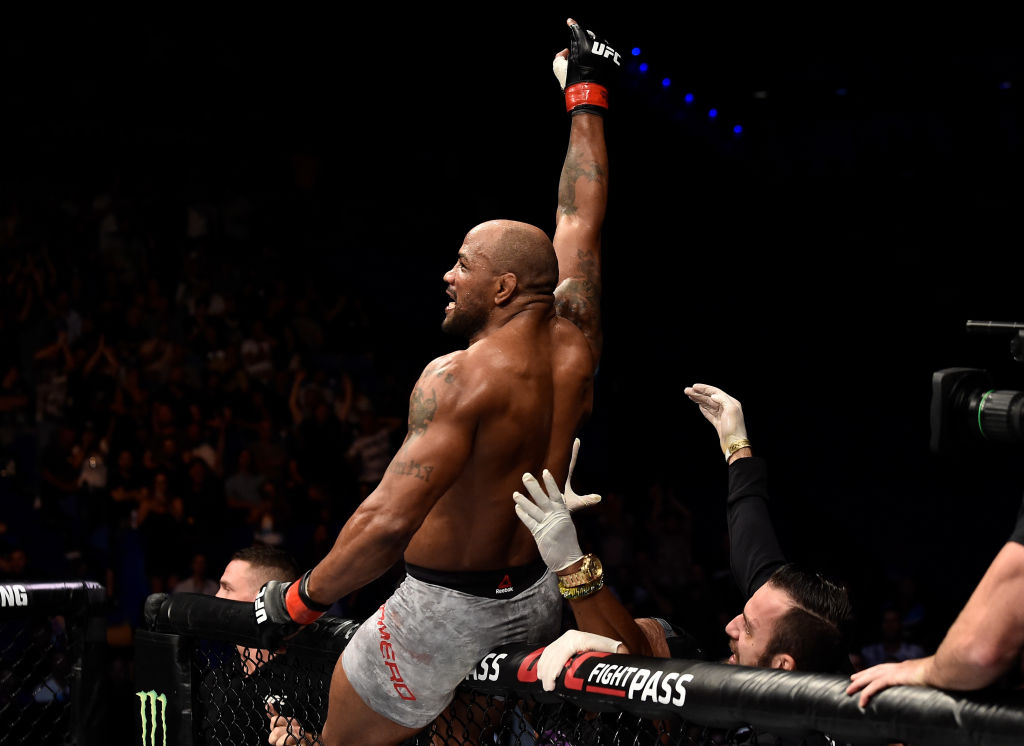 It’s an underrated part of the fight game. When an athlete is in his early 20s, late nights and living fast may not affect what happens on fight night. But that youthful exuberance doesn’t last forever, and if the athlete doesn’t figure that out, trouble usually follows. Romero figured it out, and it’s led him to a 9-1 UFC record, with the only defeat being a razor-thin decision to Whittaker in their July 2017 fight for the interim middleweight title.

“We made several mistakes, then we analyzed them very thoroughly so we won’t make them again,” he said of his first bout with Whittaker. “Yes, I could have done some things differently and we’ve worked hard on that.

“But Robert is an excellent athlete,” Romero continues. “He’s shown it by defeating ‘Jacare’ Souza, by defeating Brad Tavares, Derek Brunson, and by defeating me. I don’t say the first time we didn’t work as focused and serious as now. But now we’ve worked twice as seriously and more rigorously than the first time because we know he’s the champion and he’s not easily defeated.”

It’s the talk of a sportsman, and the UFC 225 bout has no hint of bad blood or gamesmanship. It’s simply the two best middleweights in the world matching wits and fists. That wasn’t the case in Romero’s last fight in February, when he got into it verbally with former champ Luke Rockhold, who had some pointed barbs to throw at his opponent. It irked Romero.
MORE FROM UFC 225: Embedded Ep. 4 | Free Fight - Romero vs Machida

“I was called on short notice, but I accepted the challenge,” he said. “Firstly, because Luke had made some statements against me and I don’t think it was ethical; there were no sport ethics in what he was saying. We hadn’t had a close relationship, but we shared some things. We hung out on several occasions, and you need some ethics. If you think something is wrong, and you weren’t asked, don’t talk. If he was asked, he should have been more ethical. If he wasn’t asked, he shouldn’t have spoken. He didn’t say nice things about me, so that fight was actually needed. We needed to fight.”

And they did, and as Rockhold found out, don’t get on Romero’s bad side.

It was a devastating third-round knockout win for Romero, and while he didn’t get the interim title due to another instance of missing weight, he did get his rematch with Whittaker, and when it comes to the result of this fight, Romero is confident, but not cocky. So don’t expect a prediction for Saturday night’s bout.

“We’ll do our best,” Romero said. “Blood will be shed. I can promise that.”