Talent, athleticism, power, experience. No. 3-ranked middleweight Yoel Romero has it all. Yet even with wins in all six of his UFC fights, five of them coming by knockout, there’s an idea that “The Soldier of God” can do even more.

Seems hard to believe, but whether he’s abandoning the wrestling that earned him a silver medal in the 2000 Olympic Games while representing Cuba, or starting slow enough that he’s had to pull off come from behind victories, Romero has to be driving his coaches crazy.

Then again, maybe not.

“What drives me crazy is his athleticism,” said Ricardo Liborio, head coach and co-founder of American Top Team. “He's a genetic freak, seriously. I never saw somebody like him. At American Top Team, he is definitely the most gifted athlete, and he is who he is.”

So does that mean harnessing what makes Romero special in the Octagon, or letting him freestyle and use those gifts freely? For Liborio, it’s a mix of both.

“You've got to control it sometimes,” he admitted. “But when I started really preparing him after Feijao (Romero’s only pro loss in 2011), I saw a predominance of striking only and we changed that. And he was very open to listen. I think he was very trusting in my ability to create a strategy for him and it happened for him. I think he finally put it all together, and he's a true mixed martial artist.” 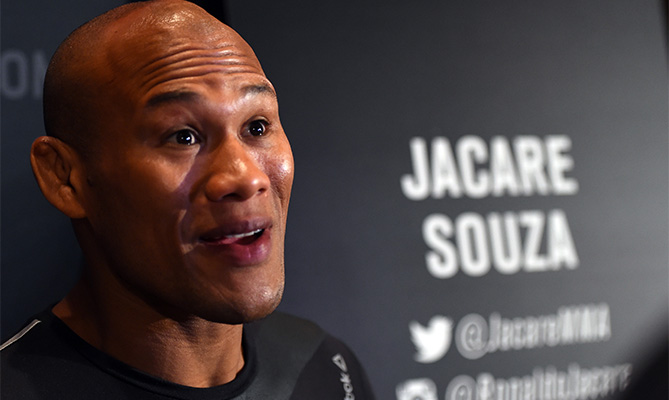 Ultimate Media Day at MGM Grand Hotel & Casino on December 9, 2015 in Las Vegas, Nevada. (Photo by Josh Hedges/Zuffa LLC)" align="center" />
Romero, 38, has bought into the ATT program as well, and when talking about his UFC 194 bout with No. 2-ranked Ronaldo “Jacare” Souza during Wednesday’s media day for the event at MGM Grand, he’s clear on his intentions for Saturday night.

“It's mixed martial arts,” Romero said. “It's a complete fight, not just stand-up. We're going to fight everywhere in the cage - standing, on the floor, all kinds of ways.”

But oh, how fans love to see Romero throw down with his unorthodox, yet effective, striking game. It’s almost as fun as seeing Brazil’s Jacare twist opponents’ limbs into pretzels on the mat, making this the most highly anticipated middleweight fight not involving Chris Weidman and Luke Rockhold. And given that the bout has been postponed twice already, both fighters are more than ready to finally touch gloves and get down to business.

“The first time he got sick, the second time I got injured, so now it's going to be the third time, and we've had time so we could analyze each other,” Romero said.

But does all that time help or hinder preparation?

“I think that's normal and it works both ways,” Souza said. “It can work well for me and also for Romero. Whoever digests all the information better is going to put on the better fight. But it's going to be explosive.”

Souza, 36, is a former Strikeforce champion who hasn’t lost since he dropped his belt to Rockhold in September of 2011. After that fight, he ran off eight consecutive wins, five of them in the UFC. Before getting a title shot, the last obstacle in front of the jiu-jitsu black belt with the ever-improving striking game is Romero, and while the stylistic matchup is attractive enough, with Jacare being a fast starter and Romero traditionally a slow starter, whose game plan will prevail?

“I think he's gonna walk back,” Souza said. “He's not gonna push forward, he's going to move back. He's not going to be able to handle it.”

For his part, Romero doesn’t care how he does it, as long as his hand is raised when it’s all over.

“Whether it's going to be a knockout or a decision, the most important thing is that I'm going to win,” he said.

Then what’s next? Likely a title fight against the winner of Weidman vs. Rockhold. That’s the goal for both fighters, who share the opinion that it doesn’t matter who wins that fight, as long as they’re challenging him next for the middleweight crown.

“Since I started my career in MMA and since I got in the UFC, I put everyone on my list, as each one of them could be my rival and the next one in line for me to fight for the championship,” Romero said.

“I have no preference,” Souza said. “I'm here to grab my belt and I want to fight the winner of this fight.”