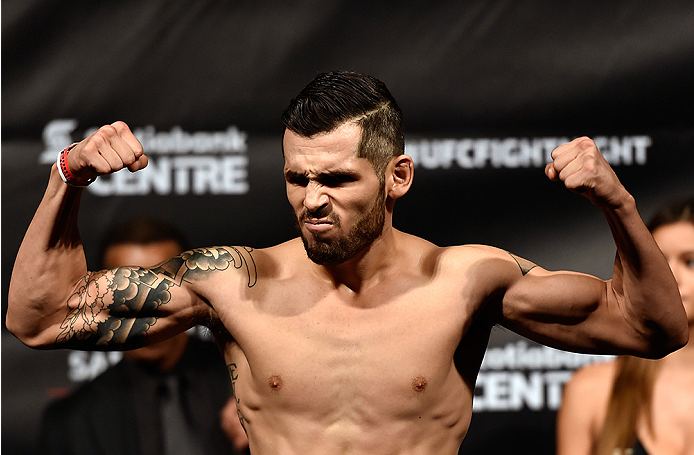 If Roman Salazar isn’t the happiest man in the UFC at the moment, he’s at least in the top ten. Sure, his short-notice Octagon debut against Mitch Gagnon last October didn’t go the way he wanted it to, but in getting the call to the big show, the Tucson, Arizona native got to put the word “former” in front of his previous job title of cable technician.

“It’s pretty awesome, I’m not gonna lie,” Salazar said. “At this point, it’s already been a couple months and I still can’t get used to it. I set that alarm for 5 o’clock, and I’m like ‘oh yeah, I don’t have to do this.’”

To quit a job for a better opportunity is always exhilarating. To do it for something you’ve dreamed of and worked at for nearly seven years takes that feeling to a whole other level, and that’s where the 27-year-old sits these days, on top of the world and ready for his next assignment, which just happens to be against veteran Japanese star Kid Yamamoto on this Saturday’s UFC 184 card in Los Angeles. Consider this another item checked off on the bucket list.

“I always dreamed of going to STAPLES Center to watch a Laker game, and now I get to compete there? It’s unreal to me. So I’m on Cloud Nine a little bit.”

Returning to the Octagon for the first time since February of 2012, Yamamoto has yet to earn a UFC victory in three tries, but that has little bearing on how Salazar sees him. And while the Fight Ready team member respects and admires Yamamoto, he also has to look at him as just another opponent, albeit one that can skyrocket his career.

“It’s a win-win situation for me,” he said. “I’m in awe still, but I have to treat him like I would any other opponent and do my best. I’ve got to be ready for anything, and I’m more than excited and up for the challenge. This is a catapult fight here. I could put myself on the map and everybody’s going to know who I am with one fight, so I have to go out there and perform for sure. I want to make a name for myself.”

Salazar was on his way to doing that on the local circuit, putting together an impressive 3-0 run last year that was capped off by a first-round submission win over Jose Carbajal on September 20. His coach told him to take the week off. Then he got a call from the UFC to step in on short notice to face Gagnon on October 4. Salazar wasn’t about to say no, but as he describes the fight, which he lost by a first-round submission, “My victory was making weight.”

And showing that he was ready to step up against anyone at anytime. It earned him a return call to the show, and this time, he’s getting the chance to do it as a full-time fighter.

“Always going into every fight before, it was kind of funny,” he explains. “Fighters usually have that idea that they’re prepared and they’re outworking their opponent. No matter what fight it was though, I always questioned myself and said ‘man, I wonder if I did enough?’”

Salazar talks of 10 to 12-hour work days followed by whatever training sessions he was able to get to, all the while trying to fit in time with his wife and kids.

“I have the greatest support system ever,” he said. “I’m lucky to have a wife like I do, because the crazy hours I put in here, I think 95% of women would be checking out. I always joke with her and say ‘you’re like a single mom during the week until the weekends come.’ She’s been there since the beginning, and my kids as well, and it’s great.

“The money was never what really drove me,” Salazar continues. “It was always about becoming something better. And it might sound cliché, but it’s really about leaving a legacy for my children. They’re going to be proud of me regardless, but I want them to have some stories to tell their kids.”

They can probably start with the time dad fought Kid Yamamoto in the same building where Kobe Bryant made magic on the hardwood. For Roman Salazar, it could be the start of something big.