This is a new generation of wrestlers in the UFC, and Shane Roller will fit in nicely. 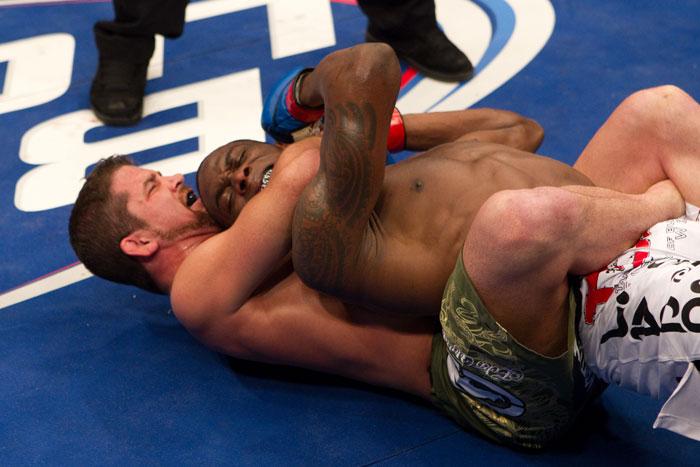 The UFC has signed another wrestler, Shane Roller. Just another boring story about a 3x All-American Division I wrestler turned WEC top contender in less than three years of fighting in MMA cages. Just another wrestler who has become a savvy submission specialist, earning all but one of his six victories in the WEC by submission and four of those in the first round. Just another 155-pound wrestler in the UFC along the same lines of Clay Guida, Gray Maynard and UFC lightweight champion Frankie Edgar.

So if the old adage is that wrestlers are supposed to be “lay and pray” artists, then the ones on the current UFC roster are simply doing it wrong.

Last year’s “Fight of the Year” featured Chael Sonnen out wrestling the champion, Anderson Silva, for almost five rounds before Silva slapped on a fight-ending triangle armbar, was easily Silva’s most exciting title defense in years.

Lastly, on this New Year’s Day, two wrestlers, Maynard and Edgar, fought for the lightweight belt in a five round war to end all five round wars. This is a new generation of wrestlers in the UFC, and Shane Roller will fit in nicely.

“I train to finish people,” asserts the Oklahoma native, who has only gone the distance once in his 12 professional MMA fights. By far the majority of Roller’s wins are by submission, but he has ended two fights by TKO as well. “Anytime I step into the cage I like to finish a fight. I get a rush when I finish a fight. If I can finish a fight early it is a huge bonus for me personally”

Roller’s next challenge will not only be to continue his fight finishing ways, but to do so in the black cage of the UFC. On March 3rd, the 31 year old father of two will be making his UFC debut against Brazilian Jiu-Jitsu black belt Thiago Tavares. After two years with the WEC and accumulating a 6-2 record, Roller will bring his acclaimed grappling credentials to the deep shark-infested waters of the UFC’s lightweight division.

“There was always the goal to fight for the UFC,” says Roller, who began training MMA at 28 years old and in a year’s time made his debut in the WEC with a guillotine choke victory over Todd Moore at WEC 35. “I loved fighting for the WEC. The arenas we fought in were great, like the old Hard Rock. The crowd is so close to the cage and they’re hollering and screaming - it was fun.”

The 3x All-American from Oklahoma State University is standing at the edge of the precipice and he’s not worried: he’s excited. Fighting in front of bigger crowds, against bigger opponents, and with greater rewards on the line is why Roller competes. It is what he prepared for and accomplished in college. It is why he jumped at the opportunity to train MMA when his former OSU teammates Jake Rosholt and Johny Hendricks asked him to join their new fight team: Team Takedown.

“Everyone knows that the UFC is the best place to be and the best place to fight for, but I know that when I get out there I'm going to give it my all, which was the same approach I took when I was at OSU. I think it definitely helps coming from college wrestling and being familiar with those types of atmospheres. Walking out to a hostile crowd can be very similar to walking out to a UFC crowd. It's just you versus one other person and everyone is watching you. That's something I have done my whole life and I don't feel any added pressure with it. I actually enjoy it. I love it when a big crowd is watching and making noise and your adrenaline gets going. I like performing in those situations.”

Now, it’s time for Roller to prove it against submission ace Tavares. “He's tough and he's dangerous,” admits Roller, who can read a record just as good as anybody and see that 11 of Tavares’ wins are by submission, including his last victory at UFC 119 against Pat Audinwood. “He's got real good Jiu-Jitsu and some pretty good ground and pound. He brings all of it together real well, so he's dangerous. But I have fought Jiu-Jitsu guys before and I just need to use my wrestling to get good positioning on him.”

There is no mystery where both of these fighters would like the fight to go: the ground. “I think we're pretty similar,” claims Roller. It would be a shock to everyone if these two stood and traded for the three rounds leaving their grappling skills on the bench. “He probably thinks my stand-up is my weakness and I think his ground game is much better than his stand-up also. I think we're both thinking this fight is going to play out on the ground. It's going to go to whoever has the best ground game that night.”

As of late, Roller has been a rear naked choke machine, winning three of his last four fights that way. “I have a lot confidence in my Jiu-Jitsu,” states Roller, who secured one of those impressive chokes for a first round sub win over former WEC lightweight champion Jamie Varner in December to cap off his WEC career. Roller also finished UFC lightweight Takanori Gomi with the same choke in an exhibition grappling match at the UFC Fan Expo in May. “There are a lot of moves I get in practice that I can submit people with, but in my fights I keep ending up on people's backs. Once you're there you have to be thinking about getting that rear naked choke in.”

Some may wonder why this muscular mass doesn’t win more fights via ground and pound like his fellow wrestlers, but it boils down to a comfort level. “I feel like I could probably get more TKOs, but I just feel more comfortable getting a dominant position and securing something up,” explains Roller, and this philosophy has worked for him so far, as he’s earned two “Submission of the Night” awards while in the WEC. “If I get someone's back, I could flatten them out and punch them until I finish the fight with a TKO. I just feel more comfortable going back to my submissions and looking for the rear naked choke in that position.”

In Louisville, Kentucky, Roller will be starting a new stage in his MMA career by taking on Tavares in the UFC’s Octagon. A career that began suddenly with a phone call from a former OSU teammate and continued with a move to Las Vegas, Nevada for training and, recently, moving to Arlington, Texas to be closer to his original home of Oklahoma. It was an unexpected career choice for a man who admits at the time he didn’t really know how to throw a proper punch. It was the confidence he had in himself as a wrestler that made him step into the cage.

“It's not necessarily that you have to be a ‘fighter’ to be in the UFC. You have to have the ability and mindset to go through the grind of training, which is more important than being a mean guy or a bully. These college wrestlers can go through the grind and have been through hard practices and they know how to push themselves and know what it takes to go out there and exert themselves like that and how tired you are if you are not in shape. They know how to get their bodies right for competition. College wrestling gives them that.”

The night of March 3rd, the Kentucky crowd will be whipped up into a frenzy and Shane Roller will be feeding off it. He will be ready for that cage door to shut, so he can take off after Tavares like a rampaging rhinoceros. Just another wrestler looking for a takedown in the UFC.