"They both have the power to knock each other out with one punch
standing up, and in the wrestling department, I think Hendricks would
have a slight edge." - Georges St-Pierre 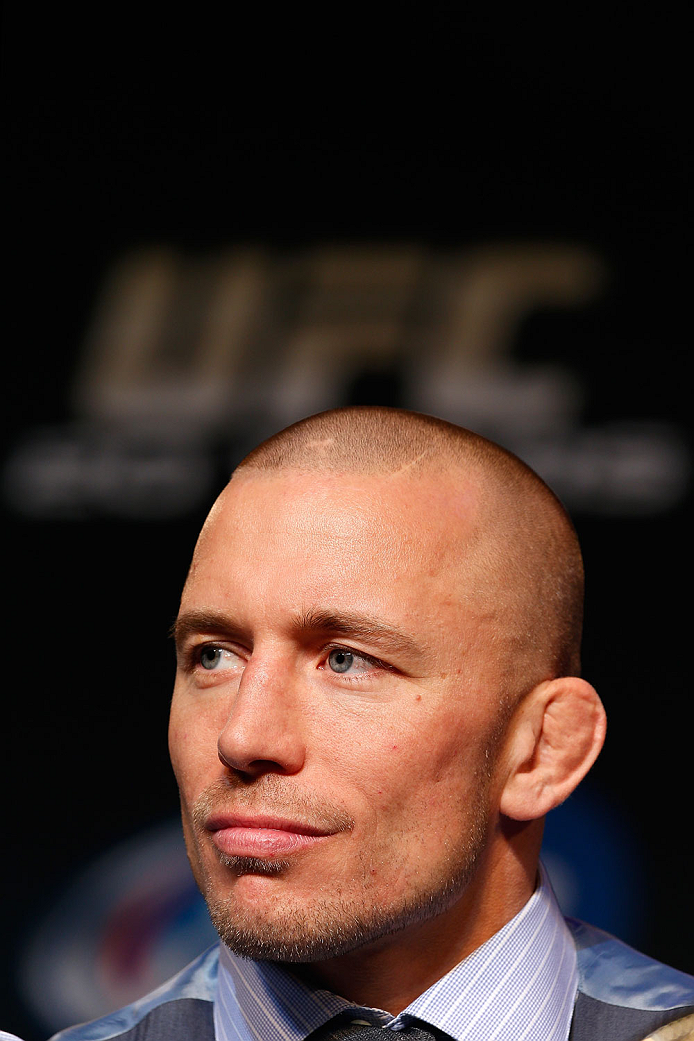 Say hello to the bad guy. Well, at least on the silver screen, where former UFC welterweight champion Georges St-Pierre is seeing how the other half lives, playing villain Batroc the Leaper in the upcoming Captain America: The Winter Soldier.

“My role is as a French mercenary who’s an Olympic lifting world champion, a martial arts expert, and I’m a bad guy in the movie,” said St-Pierre, a comic book fan growing up who now gets to bring the images on the printed page to life. “I’m a bad person trying to give hell to Captain America.”

It’s quite the role reversal for the Montrealer, who has always been a stellar ambassador for the sport both in his home country of Canada and around the world. But he liked it.

“It was actually very fun because I’m always the good guy in real life,” he said. “I try to be a good example and good role model, so by being the bad guy in this role it released my aggression. (Laughs) It was fun.”

That’s not the only role reversal for the 32-year-old, as this Saturday night in Dallas, a UFC welterweight championship fight will take place without him walking in with the belt around his waist, as Johny Hendricks and Robbie Lawler face off for the belt GSP vacated last December in order to take a break from the sport. You would expect that watching UFC 171 and seeing someone else compete for this title would provoke some interesting emotions. But St-Pierre is content with his decision to walk away.

“It doesn’t matter to me; that’s what I wanted,” he said. “I wanted to take a break and be off the radar for a bit.”

He seems to be enjoying the time off.

“It’s very good,” he said. “I’m in the best shape. I always train and I do a lot of other stuff, and I don’t have nobody in mind that’s gonna try to beat me up. (Laughs) So I have a much healthier lifestyle and I feel much better than I did when I used to compete. It feels good.”

St-Pierre hasn’t vanished from the public eye though, with promotion for Captain America and other commitments to sponsors keeping him busy, and he was also in Brazil last month to corner friend and teammate Francis Carmont for his fight against “Jacare” Souza. But like he says, it’s a different kind of busy when you don’t have an opponent training to punch you in the face, even if he’s fielding questions almost daily about his fighting future.

“I’m doing a lot of commitments for my sponsors and when I do those appearances, there are always guys asking me questions about the fight game,” he said. “But when I’m taking a break, it’s a break from the competition, and answering questions is not a stressful thing for me at all. It’s stressful playing the mental game before the fight and getting ready for the critics, the expectations of people, and things like that. This is different.”

So what of the division he has left behind for the moment? How does he see this Saturday’s main event playing out?

“They both have the power to knock each other out with one punch standing up, and in the wrestling department, I think Hendricks would have a slight edge,” said St-Pierre, whose most recent bout was a controversial five round split decision win over Hendricks, a victory that improved his record to 25-2, with 12 of those wins coming in UFC championship fights. Yet while Hendricks or Lawler will leave Dallas with the title, GSP believes that a future champion will be one coming from the Tristar Gym in Montreal that he calls home.

“I believe Rory will be champion one day,” he said of teammate Rory MacDonald, who is coming off a gritty Fight of the Night win over Demian Maia last month. “He showcased a lot of heart in his last fight and a lot of people didn’t see him as the favorite, so he did very good.”

St-Pierre’s break from competition has turned a division ruled dominantly by one man into a wide-open one where on any given night, a new titleholder could emerge. That has directed a huge spotlight on the 170 pounders, and while he only made his decision to walk away in December, is the former king getting itchy for a return? Well, not yet.

“I had a lot of pressure and I took a little break,” he said. “If I want to come back one day I’ll be back, but now I’m really enjoying it and I’m helping my friends get ready for their fights.”