"From now until whenever my career ends, I want people to say, 'that guy is tough and that guy can scrap.'"- Roland Delorme 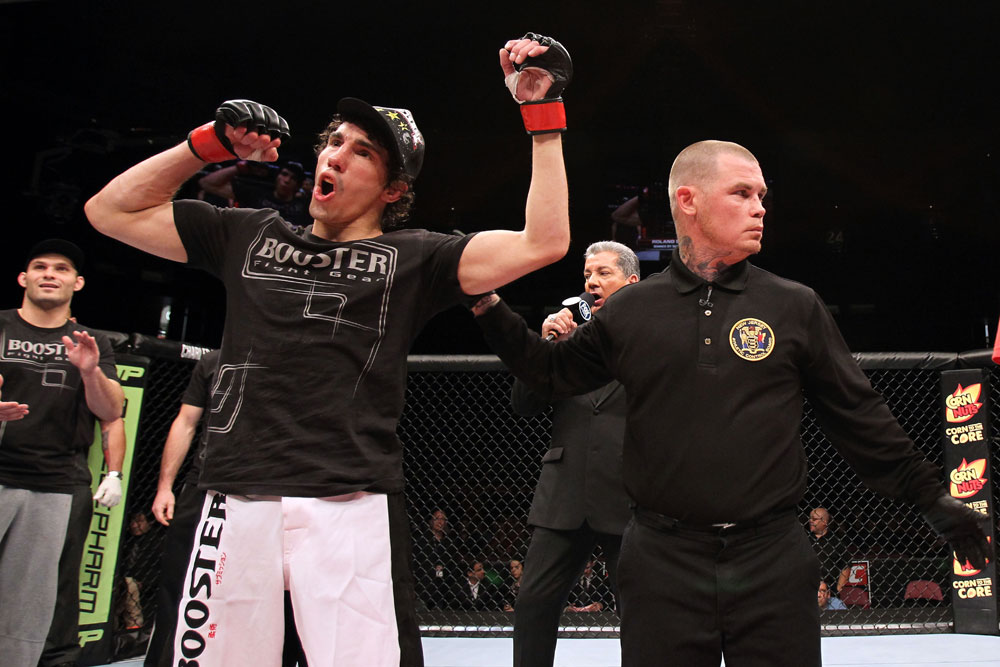 He only had 10 seconds left, so he finished the fight in 9.

In the same amount of time it takes Usain Bolt to run 100 meters, Roland Delorme secured a fight ending rear naked choke on fellow Canadian countryman Nick Denis at UFC on FOX 3. It was only the first round, but it was a wild opening five minutes where both bantamweights rocked each other with clean punches to the face and a finish for either man appeared imminent. But the ever opportunistic stoppage machine Delorme only needed the briefest of openings to seize the submission and force the tap with one tick of the clock remaining, which increased his record to 2-0 inside the Octagon.

“Once I grabbed his neck, I heard the ten seconds bell go and I just knew that if I'm going to finish the fight it had to happen now,” remembers Delorme. “Once I had him hurt with a minute left in the round, I knew that I had to get on this guy now because if he gets a minute break between rounds he could come back as a completely different fighter. I thought I had to do this now. Once I sunk that choke, I just squeezed. I usually don't squeeze chokes and I tell people don't squeeze chokes because you'll burn your arms out trying to finish something that's not there. But I felt it go under his chin and I knew I was across his throat and I knew that there was only 10 seconds left, so I was like I'm going to squeeze as hard as I can until the bell goes. You can go out or the round is going to end.”

The 28-year old from Winnipeg needed just shy of a full round to beat the previously top-ranked 135-pounder of “The Great White North” who he had been trying to fight for the better part of two years. Heading into the May bout, he gladly accepted the role as the underdog, knowing Denis had knockout-friendly hands and more experience, and plus, Delorme was taking the fight on short notice by filling in for an injured Johnny Bedford. But Delorme’s confidence in his submission game is paramount, earning him six of his eight victories as a professional with the other two wins by KO/TKO. Plus, he isn’t nervous about eating a knuckle sandwich or two in search of feasting on another tasty sub.

“Nick's a solid dude,” tells Delorme. “He's been around the world. He's fought a lot of really great guys and he's beaten a lot of really great guys. I knew it wasn't going to be an easy fight, but I knew it was winnable. I knew that the first round was going to be tough. I was probably going to take a bunch of punches in the first round and I knew that if I was still standing I could win that fight. That's kind of the way it went down and I couldn't be happier. The whole fight in general I liked. I don't mind getting punched in the face, I like it. I enjoy it. It doesn't bother me. When I'm taking a beating, it's not a big deal. The one thing about submissions is I knew that all it would take is if I got one opening, one mistake, and I got his neck and it's over.”

The Ultimate Fighter season 14 alum is gearing up for his third Octagon outing, this time in his native Canada on July 21st at UFC 149 in Calgary against brawler Francisco Rivera. To follow-up winning back-to-back UFC contests via rear naked choke, Delorme was briefly connected to meet Bibiano Fernandes in what would have been the Brazilian’s UFC debut after tearing up the Japanese MMA scene. After a small amount of melodrama, Delorme is now fixed to fight the bantamweight bombardier Rivera, who has five of his eight wins by KO/TKO. Although Rivera’s name doesn’t carry as much proverbial weight as Fernandes’ does, Delorme knows their fists do and that they can carry with them the same type of knockout power he needs to stay away from inside the cage.

“I didn't know who Bibiano Fernandes was,” admits Delorme. “I didn't watch DREAM. They gave me a name and I said yes. I didn't care who that guy was. He's a good BJJ guy, throws really, really hard - great, fantastic. He didn't get hurt. He just decided he didn't want to fight anymore - that's how that fight ended. He didn't want to fight me; I wanted to fight him, whatever. Now, I have Francisco Rivera and he's happy to fight me and that's fantastic. I want to fight guys who want to fight me. Francisco is just as dangerous. He could knock me out just as much as Bibiano could. Everyone's got a button on the chin. You hit me hard enough on the chin and I go out. I know that. It's not that one guy is more dangerous than the other; they're all dangerous in different ways. I'm not going to overlook Francisco because he's not Bibiano or he doesn't have the same record or hasn't fought the same guys. Everybody gets to the UFC by beating people and being good. There's no easy fight in the UFC.”

The matchup with the 8-2 Rivera is remarkably similar on paper to the one with Denis, as they’re both home run punchers and Delorme’s chin is made of skin and bones like everyone else’s. “If he hammers me with his right hand, I'll probably go unconscious and that's fine because if it's not dangerous it's not fun,” states Delorme, who enters the Octagon not looking for a grapplethon, but a fist fight, because this is MMA and not simply BJJ. “It comes down to keeping my chin tucked and my hands up and going out there and having fun. If we're exchanging punches and I see that I can take him down then I will and if I don't see it then I won't. When I fight, it's all action and reaction to me.”

Delorme isn’t looking to give Rivera an inch standing if he can help it, but, make no mistake, if the fight hits the floor, that’s the Canadian’s world. The product of the Winnipeg Academy of Mixed Martial Arts has been training there since he was 21, but he began his journey into one-on-one combat competition at the age of eight in Judo. Delorme’s dogged determination with his grappling in the cage is what earned him a 6-1 record in Canada, a spot in the TUF house, and his first two wins in the UFC. It’s a success story that he has worked most of his life towards, but simply didn’t expect; now that it’s here, he is prepared to squeeze it for all its worth.

“When I was younger and saw my first UFC, I knew exactly that I wanted to fight,” affirms Delorme. “Everybody always aspires to be the best at what they're at. I aspired too, but never thought I would make it. I thought it would be nice, but never thought it would happen. I thought I would have 10 pro fights, go 50/50, and call it a career. Now that I'm here, it's a dream come true and it's crazy. Fighting in Calgary, I just love the opportunity of fighting in front of a huge crowd in my home country. I'm just so happy and grateful and really looking forward to the opportunity. At least I'll be able to check that off my bucket list. Next it would be cool to fight in Winnipeg! I'll take Calgary, that's fine, and I'll be happy with that. It's nice to go out there and showcase my skills in front of the Canadian fans that have watched me fight before I was even in the UFC. There are a few more Canadian cards this year and if I'm lucky enough and I don't get hurt and I have a good fight, hopefully I can get on one of those cards too. I'm living my dream, fighting people for money, getting paid well, getting flown around, fighting in front of huge crowds, and I'm going to ride this for as long as I can and see what happens.”

This Saturday in the Scotiabank Saddledome in Calgary, Delorme and Rivera will collide with all the trappings of a bantamweight war. “Fans should make sure to specifically watch me and Rivera because  any fight I'm in, I make it a [expletive]-ing fight,” asserts Delorme, whose fearless, finishing, fighting style will be on full display for the partisan Canadian crowd. “Every time I win, I do it in insane fashion. I dedicated my life to martial arts at a young age and I would like people to see that when I fight. From now until whenever my career ends, I want people to say, ‘that guy is tough and that guy can scrap.’”

It might sound cliche, but fight fans shouldn’t blink during this fight because when Delorme is in the cage he’s proving he makes every second count.