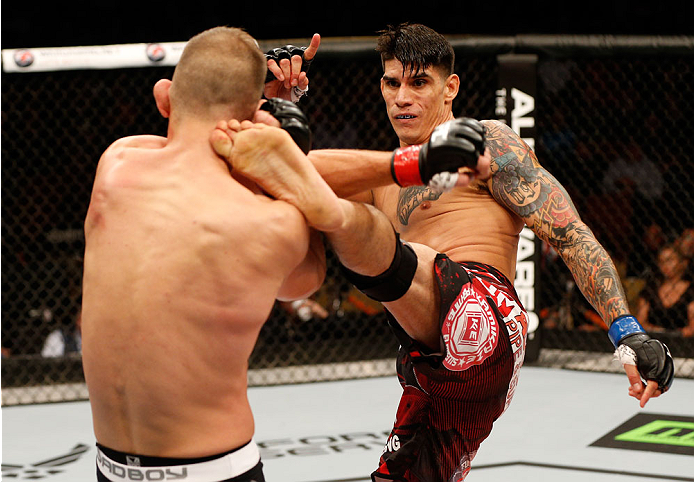 Although victory is the ultimate motivator for any fighter, some competitors seek out additional elements to stoke the inspirational fires. In that sense, Roger Narvaez has set out to become a collector of sorts, and if all goes to plan, obtaining those goals will further his progression at the highest level of mixed martial arts.

The 31-year-old Texan started down his path to knock off high-profile graduates of The Ultimate Fighter from around the globe when he faced Luke Barnatt at Fight Night: Edgar vs. Swanson back in November. The reality series has produced a solid list of stars from around the globe during its decade long run on television, with “Bigslow” being an alum of the 17th domestic installment who had turned into a fan favorite with the UFC’s fighting faithful.

With Narvaez having suffered a setback in his promotional debut, dispatching the English middleweight was an absolute must in order to establish his traction on the sport’s biggest stage. And while the tilt was a back-and-forth affair throughout the 15 minutes Narvaez and Barnatt were inside the Octagon, the Corpus Christi native took the split decision victory on the judges’ scorecards to earn his first win under the UFC banner.

Getting his hand raised inside the Octagon for the first time was definitely a highlight for Narvaez, but it gave “The Silverback” something he definitely wants more of.

“It was a real sense of relief to get that first win in the UFC,” Narvaez said. “More than anything, it was a weight lifted off my chest. We put a lot of work in training and preparation for the fight, and I know a lot of people saw me as the underdog in that fight and didn’t believe I could hang with a guy of his caliber. To go in there and beat him in the stand-up, which is his game, put an extra stamp on it for me. It was pretty gratifying to walk out there and nullify his hype, stick to my game plan and come out with the W.”

With the first addition to his collection complete, Narvaez has shifted his focus to the next challenge waiting for him inside the Octagon. The Full Contact Fight Academy representative will face The Ultimate Fighter Nations winner Elias Theodorou when the UFC returns to Dallas on March 14 for UFC 185. Not only will his bout with “The Spartan” put him up against another highly-touted TUF competitor from outside of the United States, but it will afford Narvaez the opportunity to compete in front of the always lively Texas crowd who are well-known for showing up and turning up the volume on fight night.

In Narvaez’s eyes, this is the perfect opportunity for him to make huge statement to the MMA community. Theodorou has a solid amount of buzz surrounding him, and derailing the Ontario native’s hype in front of a crowd filled with his fellow Texans will be a dream come true.

“I’m excited for this fight,” Narvaez said. “Let’s take out TUF guys continent by continent. That’s how I see it. I’m an American born and bred and for me to have the opportunity to fight these guys from different places around the world is a great feeling. Until I got to the UFC I had only been fighting guys from Texas and around the region, so to fight one of England’s best up-and-comers then fight Canada’s most highly-touted prospect at 185…let’s do it. I’m not here to just get a couple of wins and be content. I’m here to make some waves and make some noise. I want to fight for the title one day and the only way that is going to happen is by getting these matchups.

“It’s a real blessing to be able to fight in my home state again. I know it’s a popular saying but we really do these big over here. We have great fans and great people that support the sport. Anytime there is a fight here - especially for the UFC - people are going to show out and support. Just to be on a card with so many great names is really an awesome feeling and opportunity to throw my hat in there and let these guys know I’m here to stay.”

Narvaez will continue to push to progress his career as a mixed martial artist, and those efforts hardly come without a good amount of sacrifice for everyone involved. This especially rings true where Narvaez is concerned, as he has worked tirelessly to balance his job as a firefighter and family man outside of the Octagon with his passion to become a major player on the biggest stage in MMA.

One of the harsh realities in a sport that has more than a few is the majority of fight fans that only know what they see on the television on fight night. They form their opinions based on what the fighters on the docket have to offer in the brief amount of time they are under the bright lights, and Narvaez is quick to admit that he’d like to see fans take a broader scope.

That said, he’s a man who moves forward with his faith and love of his family to support and inspire him. He wants to achieve great things inside the Octagon and the hard work required to make those things a reality is an aspect of life he’s never shied away from.

“I just want everyone to know first and foremost I’m a man of God,” Narvaez said. “I wear my faith on my sleeve. Other than that, I’m just a humble dude. I’m a firefighter here in Corpus Christi who doesn’t have the luxury to train every single day or bring in all the best people from the best camps. But it’s sacrifice, man. I have a three-year-old daughter. I have a nine-year-old stepson. I have a wife that I’m constantly away from, and even though we live in the same house, sometimes days will pass where I don’t even see them but to tell them good morning and good night. That’s part of the sacrifice and the cross that I bear to make this career a successful one.

“I realize that once you are at this level there really is no off-season. You have to be ready to go at all times and I really want to be a company guy. I want the UFC to look at me and know I’m always going to be in shape and ready to put on an exciting fight every time my name is called. I want to be that fighter fans will tune in every time to see.”