Roger Narvaez: Daring to be Great 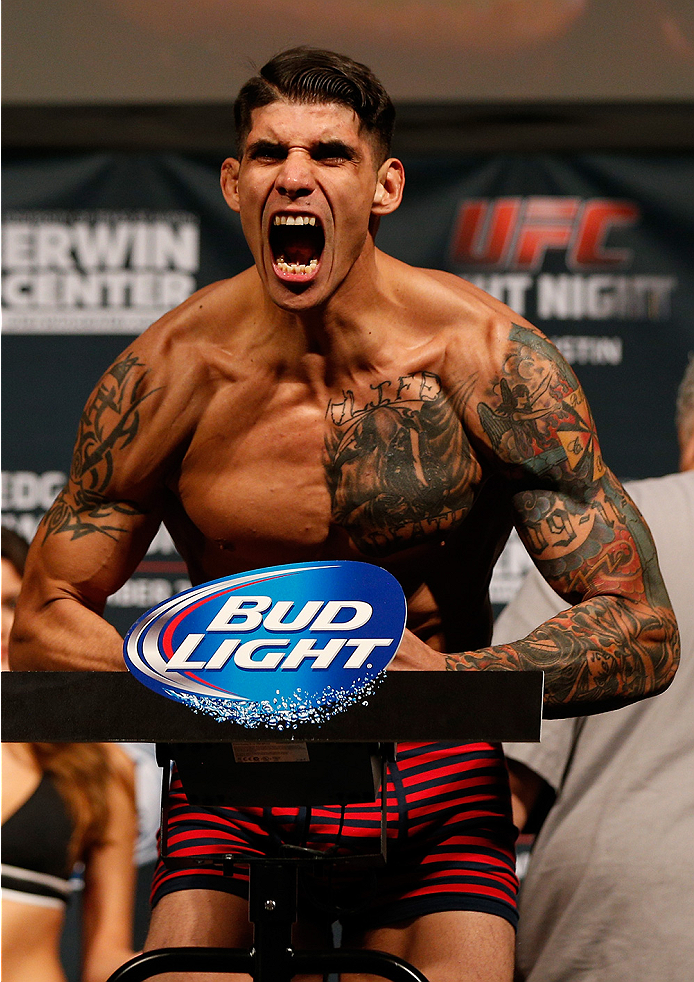 Roger Narvaez began fighting at heavyweight, moved to light heavyweight and then settled in at middleweight, where he built a solid reputation on the local Texas MMA circuit. But when he got called to take a short notice UFC fight at 205 pounds against Patrick Cummins in June it was that offer he couldn’t refuse.

Of course, he did let UFC matchmaker Joe Silva know that he was going to go back to middleweight following the bout, win or lose, but after a few visits to The Egg and I restaurant across the parking lot from the host hotel on fight week, he had second thoughts.

“During the week of the fight, I was eating like six times a day,” Narvaez laughs. “I was thinking, ‘Man, this is gonna be easy. Maybe I can stay at light heavyweight and get away with it.’”

Narvaez’ weight cut for the fight took all of 20 minutes as he sat in an Epsom salt bath.

Weighed in, well-fed, and ready to go, Narvaez thought he has a new career as a light heavyweight.

“Until I stepped into the cage and felt what it was like to fight a strong 205er,” he said. “Patrick was a great sport and a great competitor, and to really feel his strength and gauge myself, it was an eye opener for me. I consider myself a strong guy, but to go in there and fight a guy that was probably walking around at 230...that's why there's weight classes.”

After a solid first round, Narvaez was stopped by Cummins in the second, the first loss of his pro career. It was back to the original plan for the Corpus Christi native, who faces Luke Barnatt at middleweight tomorrow night in Austin.

“I'm at a lighter weight but I haven't lost any strength, and that's the most important thing,” he said of the move back to 185. “So if I can just stay nice and light and still keep my speed, why worry about cutting that extra weight just to carry five more pounds of unnecessary weight in the cage?”

A black belt in jiu-jitsu and taekwondo, the 31-year-old Narvaez initially began training in BJJ in 2007 simply to lose some weight. It turned into a lot more for a young man whose early ambitions to follow a more conventional path through college just didn’t give him the motivation to get up every morning like fighting did. This realization took eight years.

“At the time I was doing a lot of partying, and college was kind of like my part-time gig and partying was my primary concern,” Narvaez laughs when recalling his college years. “Of course everybody wants to be something great when they go to college. They have these big aspirations of being doctors and lawyers, but once you get there, you realize that only a select few are willing to study every single day and not go out and not have a social life and sacrifice those years. I just wasn't into that.”

Switching his major multiple times, Narvaez finally thought he settled on occupational therapy. That wasn’t it either.

“I would have had nine years in and finally finished with a two-year degree.”

Enter the local fire department. Narvaez applied, completed his training, and he is a proud member of the Corpus Christi Fire Department to this day.

“I love the job,” he said. “I get to do two professions that I love, and there's not too many people that have one that they love and can support a family with. So I'm really blessed to have those options.”

More importantly though, when it comes to his job as a fighter, it may not be the path others have chose to become doctors or lawyers, but he most certainly has the opportunity to be great.

“To me, I already accomplished a lot just by making it,” Narvaez said. “There are a lot of great fighters that have been around the Texas circuit here in Corpus, and to make it to this level and be the first person from my city to make it to the UFC is an accomplishment in itself. Some people say I've reached the pinnacle, but now that I'm here, I've made new goals. And they're realistic goals. The first is getting a win in the UFC. I can compete with these guys; let's see what happens. But I'm going through the daily grind because I think I can be great.”