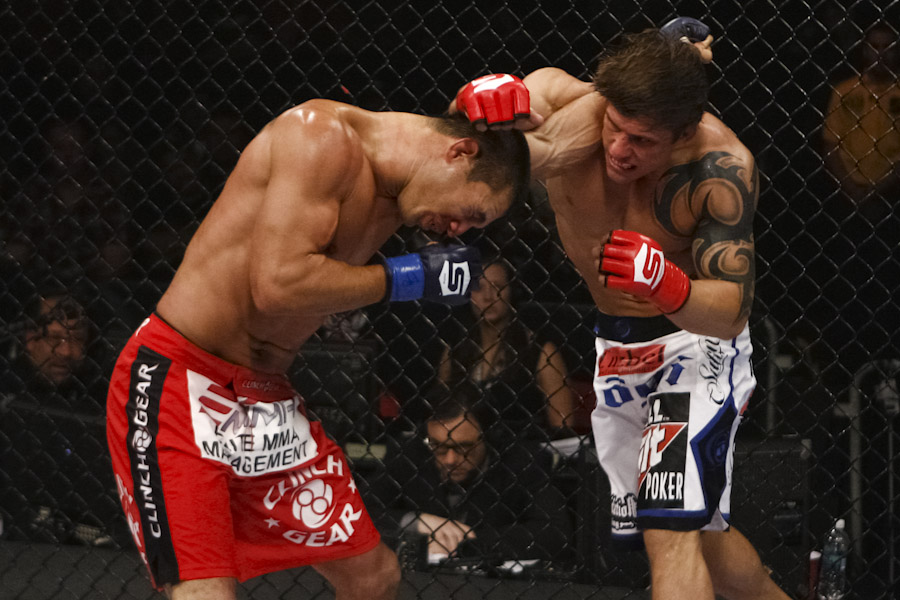 When asked what it means to him to be fighting on the Showtime-televised main card against an internationally accomplished opponent like Tarec Saffiedine, Strikeforce welterweight Roger Bowling responds, “I'm living a dream.”

For all prospective cagefighters, the “dream” is to travel their country then to travel the world, meeting other pursuers of the dream from all corners of the globe and punch them in the face. Specifically in Bowling’s case, a boy born into a tiny existence on the banks of the Ohio river has grown into a man with knockout power in both hands who is excited to take a big step in his burgeoning career by taking on easily his toughest test to date, Saffiedine.

“I'm from a super small town,” tells Bowling. “The population was maybe 200. It was a village; not even a town - Neville, Ohio. It’s such a little place on the river. I never got out of there a whole lot, so when I was able at 18 and moved out it was adjustment of just seeing other people (laughs) besides people from my school, which was super small too. To be where I'm at right now is a dream come true. I can't believe that I've come this far from where I came from. I'm very fortunate and happy to be with a good company like Strikeforce. They've always taken care of me and given me the fights that I've needed to get me to where I am. And I've fought my heart out for them.”

At 30 years old with an 11-2 professional record, “Relentless” has graduated from his brush with minor fame on the Strikeforce Challengers series to putting his name into title contention if he can score an impressive win over Saffiedine. In his five years as a fighter, Bowling’s highlights have been lightning quick KOs over The Ultimate Fighter alums Shamar Bailey (28 seconds) and Seth Baczynski (9 seconds), and to a lesser extent coming out on the losing end of Strikeforce’s first trilogy against Bobby Voelker. Most recently, he got back on the winning track last December with a 42 second KO of Jerron Peoples followed by a second round TKO over Brandon Saling in March. Now, Bowling believes he’s ready to make a serious move in the welterweight division, where he will rise to meet the challenge of facing the best that is offered.

“I'm not getting any younger,” says Bowling. “I don't feel old by any means, but I'm not getting any younger. I want to fight those guys. I need to fight those guys to push me through my training camp. It's hard to get motivated for guys who you are supposed to go in there and beat. I want to be the underdog. I want to come in and fight at the best I can be. That takes knowing that in the back of your mind that a stud fighter like Tarec is going to come in and bring it. That's in the back of your mind the whole training camp. This guy is coming to fight, so I need to be in the best shape to do my job. It makes it easier to be motivated and push yourself when you're fighting guys like him.”

This forthcoming bout with Saffiedine is in direct contrast in every way, shape, or form to Bowling’s beatdown of Saling earlier this year. With the Strikeforce card in Columbus, Ohio and Bowling living in Cincinnati, it was a no brainer for matchmaker Sean Shelby to call Bowling as a last minute addition to the card. In less than two weeks’ time, Bowling focused all his time on cutting the 25 pounds he needed to with little thought of a training camp to face another local in Saling. While the upside of the fight was another stoppage finish and a chance to perform in front of hometown crowd including his mom, Bowling realizes those types of fights are behind him, and he has his eyes on bigger and better.

“I definitely don't want to get into the habit of thinking I can go into a fight without a camp,” admits Bowling. “That was actually a wakeup call that I can't do that anymore, especially at the level where everybody is good. It just sucks when you don't have a training camp. All my confidence comes from my training camps. I'm not one of those guys who like to go into fights out of shape or not the best shape I can be or knowing that mentally. I felt like I had to go in there and knock him out and I pushed and pushed for that. The gameplan all along was to go in there and take him down, but it took getting into a slugfest for me to get back on the gameplan. It wasn't a good performance, but this fight against Tarec will make up for it.”

Up next for Bowling is an August 18th San Diego showdown with the Belgian born Saffiedine. At 25 years old, “Sponge” began MMA after running off a 12-1-1 record as an amateur kickboxer, then delving into other martial arts like Brazilian jiu-jitsu and wrestling. Saffiedine’s adopted home is Temecula, California, where he trains with the renowned Team Quest, and though he is riding a two fight win streak in Strikeforce, it was his decision victory over UFC/Strikeforce/WEC veteran Scott Smith in July 2011 that truly established his presence Stateside.

“He seems like a humble dude,” reports Bowling. “He doesn't seem to do any trash talking. Those are the guys I like to fight - guys who respect the sport. I feel like I give this sport a lot of respect. This sport gets a bad reputation anyway. I like fighting the classy guys. And he seems like a classy guy. He's a kickboxer. He's a real clean striker. Kicks and punches straight. Everything is crisp and clean. I'm going to need to be on my A game when I get in there.”

In preparation, Bowling lives and trains with the fighting faithful of “The Queen City” at Vision MMA. For his wrestling, “Relentless” trades takedowns with Bellator featherweight tournament winner Daniel Straus. For his striking, Bowling hits mitts with Rob Radford, who is the same boxing coach used by former UFC middleweight champion Rich Franklin. Actually, Franklin brought Bowling into his camp to help him prepare for his successful showing in June against Wanderlei Silva. One can easily see shared similarities between “The Axe Murderer” and “Relentless,” as both athletes are full of explosive power and bullying qualities that lead to wins by knockout and ground and pound.

“I feel like I can finish the fight at any time with my left or my right hand,” states Bowling. “I have knocked people out with both. I can finish people on the ground. I feel like my wrestling and jiu-jitsu is good too. I train in all aspects of MMA. I think I can win a fight at anytime against anyone. That killer instinct and that knockout power, I don't think you can teach that. That's something you're born with. I'm blessed to have it and I love it! I think that's the best aspect of my game, that one zig zag the wrong way for my opponent and the fight could be over for him.”

As “Relentless” gears up for his biggest fight and biggest opportunity to date to impress Strikeforce and its fans, Bowling hopes everyone can see as clear as it is to him how much he loves this sport. “I just want them to see my passion and my intensity in there and to know how much work I do to get me to that point,” asserts Bowling, who balances his fighting aspirations on top of being a husband, a father of two, and managing a full-time job. “It's waking up early every day and going to bed late every night - they’re long days every day. I would like the fans to know I put my heart and soul into this and I'm not going to lay down for any opponent. They are always going to see me at the best I can be.”

This Saturday, Bowling and Saffiedine will look to make their stamp in the evolving Strikeforce welterweight division. “Anyone is one big knockout away from a title shot and that definitely excites me,” affirms Bowling, who has scored seven of his 11 wins by powerful punches and would like to use those fists on Saffeidine first and, possibly, Strikeforce champ Nate Marquardt second. “I'm sure that excites my opponent as well and that just adds to this fight. I know that Tarec is going to bring it and I'm going to bring it and it's going to be an awesome fight for the fans to watch. I think it is going to be right up there for Fight of the Night and I expect nothing less from him or me.”

From a small village in middle-America to fighting foreign kickboxers on TV to maybe a shot at a coveted gold belt? Sounds like a wonderful Hollywood movie type dream, which Bowling will do everything he can to make into a reality.