"TUF Brazil showed me around the world, and over here in Brazil I was
even more known. It opened the door for me to get into the
UFC." - Rodrigo Damm 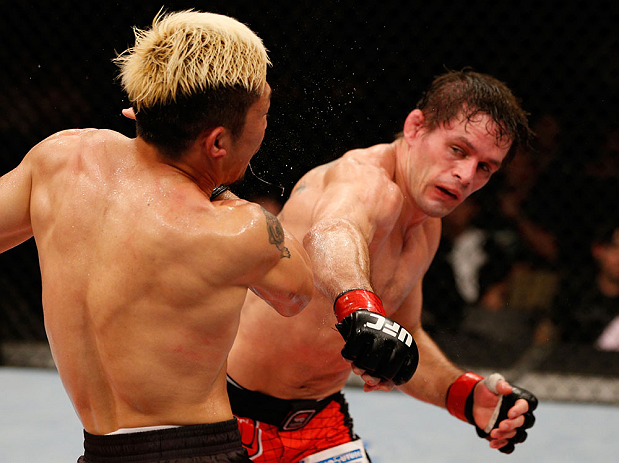 Slow and steady wins the race. It’s an old adage that is an apt one when it comes to the career of Rodrigo Damm, a fighter who has shown that it’s not always skill and athleticism that keeps you alive in mixed martial arts, but perseverance.

A dose of reality doesn’t hurt either, as Damm makes clear when breaking down his UFC run, which began in June of 2012.

“I have had some good fights, others not so good, but I was able to improve my striking and my technique,” said Damm through translator Michele Spinelli Davis. “The nervousness was there in the beginning, but now I passed through it, and I think I will now fight with more will and show to the fans what brought me here.”

What brought Damm here was a mix of jiu-jitsu and wrestling injected with a serious dose of intensity. The Espirito Santo native isn’t one for joking around when it comes to his craft, which made it even harder when the fast start to his pro career turned into a situation where the losses began to catch up to his wins. From 2008 to 2011, he lost four of five bouts, and while the losses came against quality opposition (Eiji Mitsuoka, Gilbert Melendez, Maximo Blanco, and Justin Wilcox), that didn’t soften the blow any.

“The choice of being a professional fighter was never in doubt,” he said. “I always knew I would be a fighter. But it was a very difficult phase. I didn’t have quality training, because I live in a state that does not see fighting as something traditional, and I didn't have the financial means to afford to train somewhere else.”

Then came The Ultimate Fighter Brazil in 2012. One of the senior members of the cast, Damm won his first two bouts at featherweight on the show, but he was removed from the show by doctors due to difficulties making weight. His point had been made though – he was ready for a shot in the UFC, and the rest of the world got to see it.

“TUF Brazil showed me around the world, and over here in Brazil I was even more known,” he said. “It opened the door for me to get into the UFC.”

For Damm, now 34, it was an even more satisfying development than it is for other TUF alums because he had seen the change of the weather in Brazilian MMA in an up close and personal fashion.

“It has been a big change, like from water into wine, but in terms of visibility and quantity,” he said. “Small events have conquered their space, and what remains is to enhance the athlete and ensure the fighter a good quality of life with what he gets fighting.”

Damm has turned a corner in his own career as well, winning two of three UFC bouts, with the only loss a close decision defeat to Antonio Carvalho in November of 2012. But after a kidney stone attack forced him out of a bout with Hacran Dias last October, he made the decision to move back to the 155-pound weight class.

“The decision was made together with the physicians who take care of me,” he said. “I have a very dense bone and muscle structure, which hindered me a lot to make weight. The process of making weight used to leave me very weak, and my kidneys started to warn me that my body was not supporting it well.”

So lightweight it is once again, beginning with a Saturday matchup with countryman Ivan Jorge.

“A fight is a fight,” said Damm. “He has his own strong points, but I also have mine. The difficulty is training every day, sometimes in pain, and still playing with my kids when I get home.”

It’s as honest an answer as you will get from a fighter, and that’s what Damm is, an honest fighter. There are no bombastic quests for glory, no bold boasts. Damm’s goals are a lot more humble, but no less admirable.

“My greatest ambition is to give my family a quiet life, and I know I have potential as a fighter,” he said. “That has always motivated me to continue. I have three children and they need me a lot.”