Rodolfo Vieira Never Looks To The Past, Only Ahead

There’s a tendency in athletics – and maybe life in general – to spin failure into a positive package. Variations of “you win or you learn” and “there are wins and lessons” are popular amongst a spectrum of sports, and mixed martial arts is no exception, especially considering the infrequency with which fighters compete compared to other pro athletes. That’s all to say – the first loss cuts differently, and how a previously undefeated fighter deals with that first signifier of coming up short speaks to their actual resolve and aptitude for the fight game.

Rodolfo Vieira found himself in that position when he lined up against Dustin Stoltzfus last summer at UFC Fight Night: Makhachev vs Moises.

The multi-time jiu jitsu world champion was five months removed from a stunning loss to Anthony Hernandez at UFC 258. After more or less dominating the first few minutes of their fight, Vieira appeared to run out of gas, and perhaps most stunningly, it was the Brazilian who tapped out a couple minutes into the second frame. The commentary team properly lost their minds, and Vieira was left exhausted on the Octagon floor.

Against Stoltzfus, Vieira once again found himself in deep water in a competitive fight. This time, however, he was the one earning the submission win midway through the second round.

“That loss was really hard for me, especially the way it was,” Vieira told UFC.com. “But I got back to the gym, got my head in the right place, fixed the things I had to fix and got back in the win column. So that's what matters. The fight I lost is in the past. The one I won in also in the past. My focus is always on my next fight. Winning or losing, the fights I had are in the past.”

That next fight Vieira has his eyes set on comes against Chris Curtis, one of the feel-good stories of the latter half of 2021.

After years on the regional scene, Curtis made his debut against Phil Hawes at UFC 268 for his 35th professional bout and earned a stunning first-round knockout. A month later, Curtis stepped in on short-notice to face Brendan Allen and picked up a second-round knockout.

It’s a stiff test for Vieira but an important one to pass if he has aspirations to contend in the middleweight division. Although “The Black Belt Hunter” leans on his jiu jitsu pedigree heavily in fights, especially to end fights early, he has showed a continuous climb in rounding out his skills as a mixed martial artist. 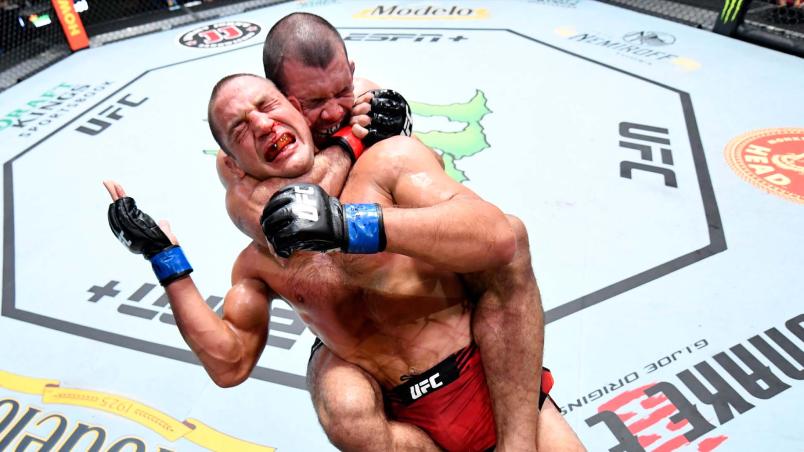 At the end of the day, however, Vieira understands who he is as a fighter. Don’t expect him to be one of those grappling specialists who becomes smitten with his striking. He wants to snatch necks and climb the rankings.

On June 25, he has the chance to become only the second man to submit Curtis and just the third person ever to finish the veteran. The desire is less borne out of making a grand statement to the division and more out of just wanting to get another positive result. Vieira very much proved he has the resolve to go along with the skills and talent to make noise in the division, and now he gets to take the next step in building even more momentum.