Looking To Face His Fears In The Sport Head On, Submission Artist Rodolfo Vieira Will Be Put To The Test Against Anthony Hernandez At UFC 258.
By BY E. SPENCER KYTE, ON TWITTER @SPENCERKYTE • Feb. 11, 2021

Less than a minute into his sophomore appearance in the Octagon, Rodolfo Vieira got kicked in the face by his opponent, Saparbeg Sarafrov. After blocking most of the follow-up blows and circling into space, the Brazilian drove through a takedown, putting Safarov on the canvas.

While Safarov worked to his feet relatively quickly, Vieira didn’t relent, shooting once more and putting the Russian veteran on the deck for a second time. Seconds later, he took Safarov’s back, and after a little bit of cat-and-mouse and softening up, Vieira cinched up an arm-triangle choke from mount that brought the contest to a close.

Watch UFC 258 From Your Country

When he rose to his feet, the impact of that early kick became clear, as the area around Vieira’s left eye was surrounded by smeared blood coming from a nasty cut just below his eyebrow. 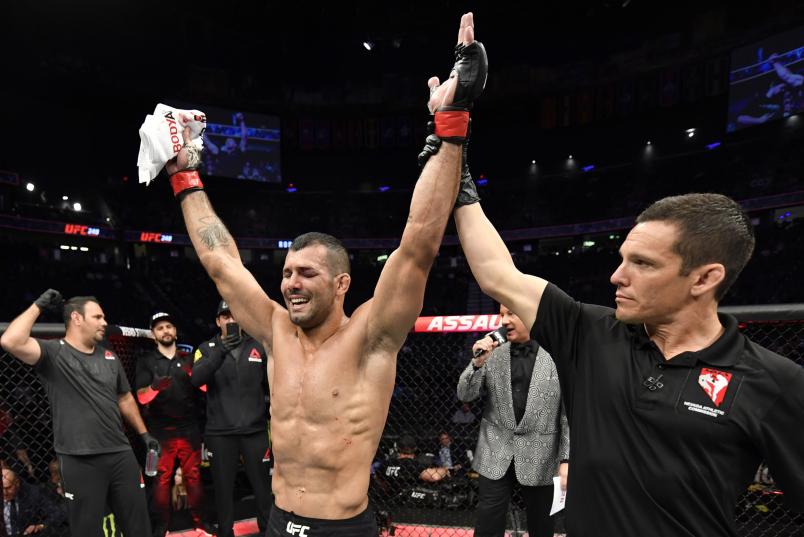 Rodolfo Vieira of Brazil celebrates after his submission victory over Saparbeg Safarov in their middleweight fight during the UFC 248 event at T-Mobile Arena on March 07, 2020 in Las Vegas, Nevada. (Photo by Jeff Bottari/Zuffa LLC)

Six weeks later, the 31-year-old Brazilian posted tandem pictures from that — one from after the cut was cleaned up and one from before — along with a caption in both Portuguese and English.

“I might be the fighter who is most scared to be fighting in the UFC or maybe I’m just the most honest,” it began. “I’ve never been afraid to say that. But one thing is certain, fear has never stopped me, and to beat me in there, you better hope that I pass out, get knocked out or submitted.

“If none of that happens, I’ll do everything I can to make whoever is in there tap!”

In a sport where so many go to great lengths to declare how fearless they are, Vieira stepped forward and let it be known that he is afraid, so as he readies to return to the Octagon this weekend for a matchup against Anthony Hernandez, I asked him about it.

“I’m a very truthful person, so I never hide my feelings or anything like that,” Vieira said through a translator. “I am very true with my feelings and when I speak, I tell people exactly what I am feeling. 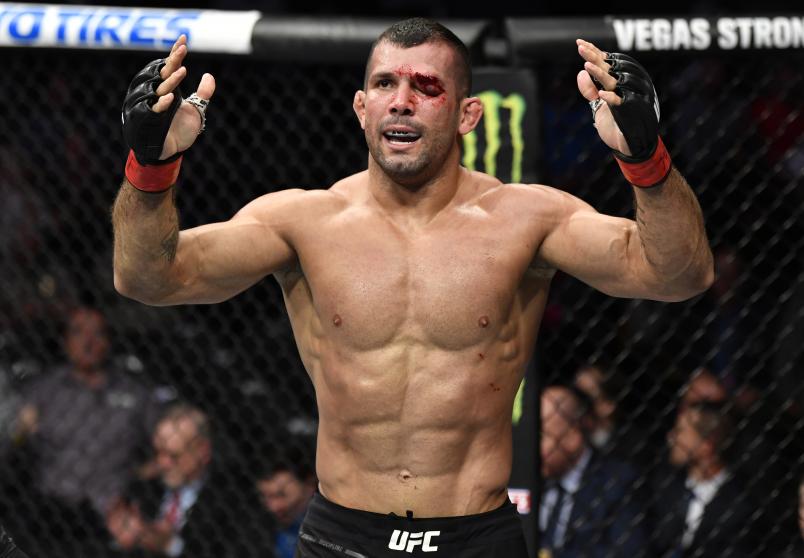 Rodolfo Vieira of Brazil celebrates after his submission victory over Saparbeg Safarov in their middleweight fight during the UFC 248 event at T-Mobile Arena on March 07, 2020 in Las Vegas, Nevada. (Photo by Jeff Bottari/Zuffa LLC)

“It’s not a lie: I don’t like to get punched in the face and I’m not a very happy camper when it happens, but I draw motivation from my fear of fighting because I like to conquer my fears. This is one of my fears from before I started fighting, and every day that I’m fighting, I’m conquering it more and more and beating that feeling of fear.

“I was also scared of fighting jiu-jitsu, and it was less aggressive than MMA, but I was still scared and that always drove me to get better,” he added. “My fears push me to get better, and this way I can defeat my fears.”

Though it sounds like relatively straightforward motivational speak, the words take on greater significance when you understand what kind of competitor Vieira was in the Brazilian jiu-jitsu world.

We throw around terms like “elite” and “world-class” somewhat liberally these days when speaking about athletes from all types of sports, but the 31-year-old is one of those rare competitors where those terms don’t even feel like they do his accomplishments justice.

In five years of competing in the Abu Dhabi World Professional Jiu-Jitsu Championship (2009, 2011-2014), Vieira collected seven gold medals and two silvers, only failing to reach the top of the podium in the absolute division, losing both times to Marcus “Buchecha” Almeida. 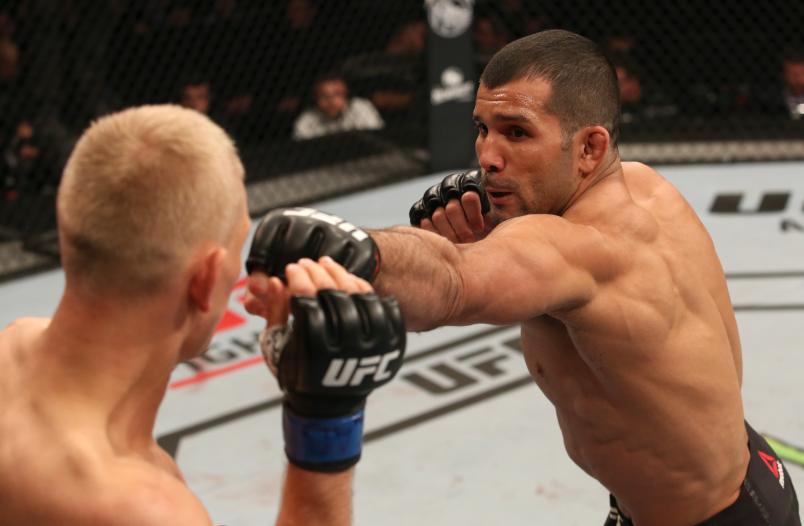 Rodolfo Vieira of Brazil punches Oskar Piechota of Poland in their middleweight fight during the UFC Fight Night event at Antel Arena on August 10, 2019 in Montevideo, Uruguay. (Photo by Alexandre Schneider /Zuffa LLC)

During that same five-year window between 2011 and 2014, Vieira added five more gold medals and two more silvers at the World Championships, with “Buchecha” again besting him in the absolute division.

He was in a rare class of grapplers for an extended period of time, and if he reached that level by attacking his fears head-on, now, he’s bringing the same approach to his career inside the Octagon, and he’s focused on reaching the same lofty heights.

More UFC 258: Gillian Robertson Won't Back Down | Belal Muhammad Looking To Break Through At UFC 258 | Kelvin Gastelum Is Fight For More Than Just A Win

“What I do now is what I have been doing my whole career, since jiu-jitsu: I basically train harder and harder every day, so that I can continue to get better, and that fear helps me train even harder so that I can defeat that fear even easier,” explained Vieira, who earned a second-round submission victory over Oskar Piechota in his UFC debut, and carries a 7-0 record with a perfect finishing rate into his clash with Hernandez this weekend.

“I’m looking forward to achieving in MMA exactly what I had in jiu-jitsu — the same accomplishments of being a winner and a champion, and driving my career to be a top fighter in the UFC, just as I was in jiu-jitsu.”

Not that he needed it, but Vieira was graced with additional motivation shortly after his bout with Safarov when he and his wife welcomed their son, Benicio, into the world.

After reveling in the dad life for a few months during the spring, the unbeaten middleweight upstart was readying to return to action in October against Markus Perez when a rib injury forced him to withdraw from the contest, leaving him with just a single appearance in 2020. 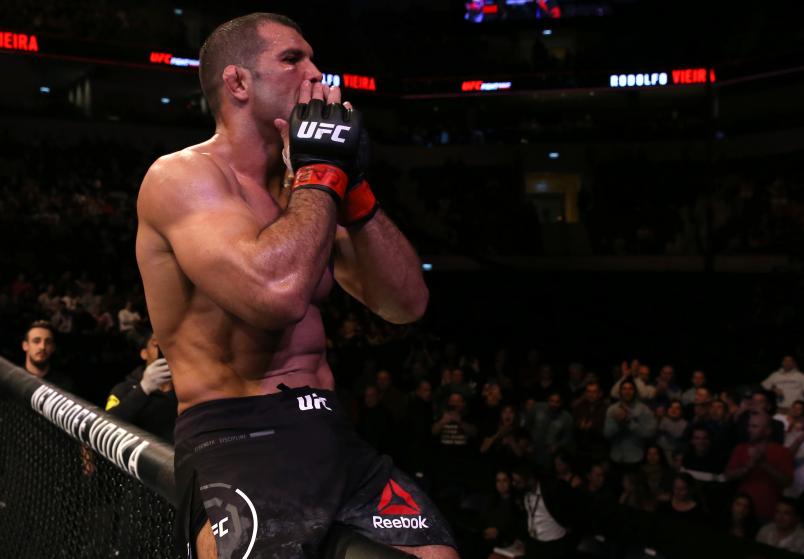 Rodolfo Vieira of Brazil celebrates after his victory over Oskar Piechota of Poland in their middleweight fight during the UFC Fight Night event at Antel Arena on August 10, 2019 in Montevideo, Uruguay. (Photo by Alexandre Schneider /Zuffa LLC)

But last year’s disappointment has given way to this year’s early opportunity, and Vieira is hopeful that he’ll be able to accomplish what he was unable to do last year in 2021 instead.

“It’s unfortunate that I got injured in September because my goal was to get two or three fights last year,” he said. “Since that couldn’t happen because of COVID and getting injured, my goal for this year is to have a minimum of three fights, so having a fight this early is a great chance to get started towards reaching that goal.”

Saturday’s fight should be a quality test for the emerging Brazilian, as Hernandez is a tough California native who graduated from the Contender Series in 2018.

He too has earned the vast majority of his victories by way of stoppage and has only gone the distance once in his career, meaning this weekend’s contest should be action-packed from the outset.

As always, Vieira will be looking to handle his business in expedient fashion.