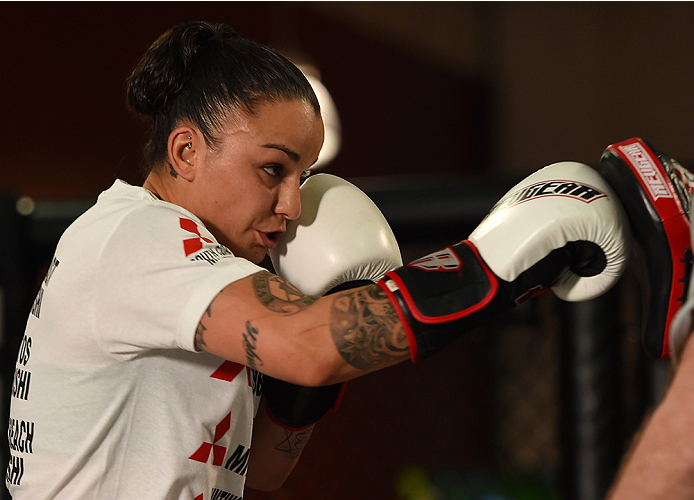 Raquel “Rocky” Pennington is 2-1 in the UFC, and while the biggest challenge of her young fight career to date may have been a brawling win over Jessamyn Duke during the TUF 18 competition, she next faces one of the most decorated boxers to enter the women’s bantamweight division in the undefeated Holly Holm.

After much anticipation, Holm is finally making her Octagon debut at UFC 184: Rousey vs Zingano on Saturday, February 28 inside Los Angeles’ STAPLES Center. But the former number one pound-for-pound boxing champion is not walking into any sort of tune-up fight.
No, Pennington is a tough-as-they-come mixed martial artist with real skills.

”Holly is a world class boxer,” Pennington said. “She’s done great things in boxing and she’s undefeated in MMA. Obviously, she has striking ability and she has good kicks, but as far as MMA is concerned, I feel like I have been doing it longer and I’ve been through the ringer more often. I’ve fought a lot of elite-level fighters and I don’t think Holly has been tested as much as I have. Holly likes to keep distance. She doesn’t like to close the gap too much. I am a well-rounded fighter. I have stand-up, I have ground, I have wrestling.”

Growing up a tomboy and discovering fighting while rehabbing a broken back as a result of a snowboarding accident, Pennington entered the sport already having the heart of a champion.
However, training in Colorado Springs, Colorado among some of the world’s elite athletes at the U.S. Olympic Training Center, she also has the benefit of being around some of the most accomplished and disciplined individuals in sports.

“It’s inspiring,” she says. “I’ve always wanted to be an elite athlete. I never thought it would be in MMA. I thought it would be in basketball or softball. But I train with a bunch of Olympic boxers, and I have a few southpaws in my camp who mimic Holly really well. I train in the U.S. Army World Class Athlete Program at Fort Carson as well. It’s been a whole new world. I went from an MMA gym where I strictly trained MMA, but when I’m here and I train with these athletes, their mentality is amazing. Everyone walks in with the same attitude. Everyone here has the same goals, and it’s the same feeling when I walk into a fight. So I feel like I am training harder and smarter than a lot of other mixed martial artists in the game. I feel like I belong there.”

She will need her mental toughness, as not only will she be facing a motivated Holm, she will be the co-main event on a card where women’s champion Ronda Rousey will headline in a title defense against Cat Zingano, thought to be her toughest test to date.

But Pennington doesn’t feel any pressure under the weight of a co-main event status or her opponent’s boxing prowess.

“I’m excited,” she said. “I can’t wait to get in there and get the job done after every fight camp. Fight camp is torture for me. It’s eight to ten weeks of training, so that when it’s fight time, the fight is way easier than the camp I had to train through. But I don’t think I have anything to lose in this fight. All the pressure will be on Holly. She’s making her UFC debut and there are a lot of expectations for her coming into this division. I don’t really bring pressure upon myself. For me, fighting is just another day in the office.”

So, while Holly Holm has a championship pedigree in boxing and is undefeated thus far in MMA, this isn’t exactly a “Rocky” story, where some unknown fighter off the street is being fed to the lion for some harmless entertainment value.

For Pennington, this fight will truly announce her arrival.

“I’m just going to go out there and fight my fight,” she says. “I feel like I’m a stronger fighter. Every opponent brings something different out in me. I haven’t completely taken the fighter from the gym into the cage yet, and I think that may change with Holly. I am not going to sit there and go tit-for-tat with a boxer. I plan on bringing my overall MMA game. It’s hard to predict what will happen in a fight, but I will take the fight wherever it goes and I plan to win those exchanges no matter where they happen. This is definitely a dream come true. I feel like all my hard work has paid off.”