If Bob Cook had his way several years ago, Luke Rockhold might have been fighting Robbie Lawler for the welterweight title on Saturday, and not Chris Weidman for the middleweight crown in the co-main event of UFC 194.

“At the time, he was lighter and I was talking to him and was like 'You know, if you go down to 170 from where you're at, you'll be a top guy right now,’” the American Kickboxing Academy coach said with a laugh while watching the 185-pound Rockhold work out for the media Thursday in the MGM Grand Garden Arena. “But over the years, he's grown. Before, he was tall, but he was a smaller 185. Now, he's a big 185 and he's grown and matured into the division, and here he is, he's top of the sport at 185.”

Rockhold, 31, has come a long way from those early days at AKA, but Cook knew he was special almost immediately.

“I just saw the level of athlete that he was,” the coach said. 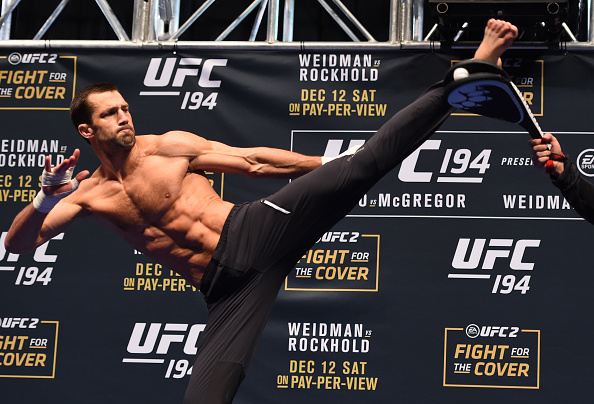 And when Cook, Javier Mendez and a team that includes Cain Velasquez and Daniel Cormier gets hold of a fighter with athleticism like that possessed by Rockhold, it’s just a matter of time before that athlete becomes a world-class fighter.

It’s a designation Rockhold has had since the days he reigned over the Strikeforce middleweight division. On Saturday, he gets a chance to truly cement himself in the upper reaches of the pound-for-pound list if he can dethrone Weidman.

The confident Santa Cruz native feels like that’s a done deal, bristling at Weidman’s assertion that he will get a reality check this weekend.

“I could say the same to him,” Rockhold said. “My reality and my confidence are rooted. He trains with a bunch of jabronis; I train with champions.”

The comment drew a roar from the crowd viewing his open workout, and if the moment is getting to him, it’s almost impossible to tell.

Rockhold does seem to be embracing his co-headlining role, spending several minutes signing autographs and taking selfies after the workout, but he’s not letting that distract him or his team from the task at hand. In fact, Rockhold appears to be more dialed in than ever to conquer everything the New Yorker brings to the Octagon.

“Weidman's a jiu-jitsu wrestler,” he said. “I've got wrestling and I've got jiu-jitsu and I've got something I like to call Legitsu. I operate differently from anyone. He can't find someone that's gonna mimic me. I've always done things different. You can ask the best guys in the world that I've rolled with.

“He can't prepare for what I'm gonna bring. I'm gonna bring flexibility, length, power, athleticism, movement. It's not gonna be like anything he's faced. I'm gonna threaten him everywhere, he's gonna be the one scrambling, trying to get back to his feet. I will have the upper hand everywhere that fight goes.”

And if his plans come to fruition, it will be another championship belt for the AKA trophy case. Yet as Cook points out, there’s still a fight to be fought.

“I don't want to get ahead of ourselves,” he said. “Chris is a really tough guy, but it's just a huge accomplishment and if he (Rockhold) gets through Weidman - Weidman's done amazing things and beat amazing people - it just legitimizes him as truly one of the best ever. And I'll be really proud of him.”