"I'm going to go out there and be my best like I always do. I'll grind
on him, I'll beat on him, and it's going to be an exciting fight." - Kenny Robertson 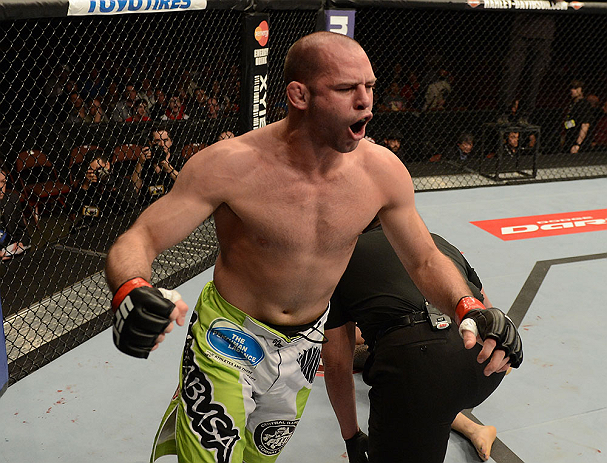 It’s ingrained in them to open our eyes to a realm of new possibilities with knowledge they have previously acquired. Whether it is the quadratic equation in algebra, the capital city of Burundi in world geography, making an S curve with a band saw in woodshop, or it could be a fascinating kneebar submission inside the Octagon.

In Brock Jardine’s case, the lesson was the latter as UFC welterweight and full-time high school teacher Kenny Robertson taught a valuable exercise in minding where one’s feet are when tripoding up to shake off an opponent.

“I wrestled all through college,” remembers Robertson. “I was a ‘leg rider,’ and leg riders get high sometimes and people try to shake you off the top. I learned to grab that foot and pull up the foot. In wrestling, it can be potentially dangerous and a ref would have to stop it, but in MMA you can kind of yank on it and it's a pretty good submission.”

“Pretty good” is an understatement, as the never-before-seen-in-the-UFC kneebar variation earned Robertson his first win in three tries inside the Octagon and a Submission of the Night bonus. “Just the win in itself was awesome because it was a load off to know that I could really compete at this level,” tells Robertson, who had taken two fights on short notice for the UFC and came up short in both to game opponents Mike Pierce and Aaron Simpson. “The fight bonus was nice and just finishing was nice. I like to get in there, finish, get the job done, and go home. It's a lot easier to enjoy the rest of the fights if you win in the first or second round than going to decision.”

The 29-year-old with an overall record of 12-2 is accustomed to finishes, as he has won all but one of his fights by some form of stoppage. At UFC 157, the sub of choice was quite unique to the viewing audience, and to Jardine, who it was applied to, but Robertson had pulled it off before years earlier. Originally, the move was discovered during his collegiate wrestling days at the NCAA Division I level Eastern Illinois University, the same school made famous to UFC fans by UFC Hall of Famer Matt Hughes, Mike Russow, and Matt Veach. As Robertson tells it, he first managed to do the maneuver to some unfortunate opponent in a match back then, which resulted in tearing that guy’s hamstring.

“I figured it out and I did it all at the same time,” says Robertson. “I didn't know how to do it beforehand. It was one of the things that led me to figure it out. I really don't practice it. Unless you're going against someone really flexible, but you can just grab the leg slowly. It's more of a feel thing and you learn it by doing it.”

To paint a clear picture, about two minutes into the first round, Robertson took Jardine’s back and got his hooks in. As mentioned, he was a little high on Jardine, so Jardine did what almost anyone would do: lean forward, brace oneself with an extended hand to the mat, and stand up. The problem is one’s foot, in this specific scenario Jardine’s, if too far forward can be grabbed, lifted up, and force that person into a very unexpected split. From there, it’s a mix of both fighters’ weight and gravity pushing down on the prone, outstretched leg. And Jardine couldn’t tap fast enough.

“Once you get the legs apart, the person really loses any muscle control to push away with it,” explains Robertson. “I wasn't necessarily leading him into that, but I had seen that he had tripoded when he fought Rick Story. He had tripoded a couple times in that fight. He got his foot real close to where his hands were. I figured if he did that then I would go for it. I like having people's backs. I have a good feel when I have it, being a leg rider and everything. When I'm fighting, I'm just looking to improve the position, go for the submission, go for the TKO, or go for the finish.”

Up next for East Peoria, Illinois’ innovator of offense is a June 15th showdown against Sean Pierson at UFC 161 in Winnipeg, Manitoba, Canada. A sure hometown favorite from Toronto, “The Punisher” has a 13-6 record and is riding a two fight win streak in the UFC, taking unanimous decisions over Jake Hecht and Lance Benoist. At 37 years old, the southpaw slugger has won the majority of his scraps simply punching his opponent’s lights out, with eight KOs to his name.

“I have a lot of respect for the guy,” reveals Robertson. “It's a good matchup. He's got good hands, a good wrestling background, and he's always in-shape. He's well-rounded. I really haven't seen him on his back that much. He's been taken down, but he seems good at getting back up. It should be a good one.”

In preparation for “The Punisher”, the moniker-less Robertson has taken advantage of the plethora of gyms in the Central Illinois area. For striking, Robertson turns to highly credentialed Muay Thai coach Ryan Blackorby of the Peoria Athletic Club. For strength & conditioning, Robertson heads to the Human Performance Lab in Germantown Hills. To sharpen those wrestling skills instilled upon him by EIU’s Hall of Fame coach Ralph McCausland, Robertson makes the trip to Springfield to tangle with fellow fighters at the Kennel Fight Club.

“Ralph McCausland was a great coach and a hell of a guy and still is,” affirms Robertson. “His style of leg riding and grinding on someone to break them so that they will give up something works particularly well for finishing. You're grinding on someone's shoulder and they want to put their shoulder down to get pinned. I've been going to Kennel Fight Club in Springfield, Illinois and some of [former coach of Matt Hughes] Marc Fiore’s guys train there, and every position I put them in there is always a little painful or uncomfortable. I don't just hang out. They say that reminds them of when they used to go with Matt [Hughes]. Positions are great, but if you put your shoulder into their throat a little bit that will make them uncomfortable and they'll think about their throat more than an armbar or kneebar or whatever you throw at them.”

This Saturday at the MTS Centre in “The Peg”, the proven fight-finishing Robertson will collide with the no-quit switch-having Pierson. “There are only really two ways I see this fight happening: I go out there and get the finish or this becomes a slugfest and we're going to go after each other on the feet,” asserts Robertson, who will look to go for the exciting ending even if he has to make up a new submission on the spot and teach us all by doing it. “I'm going to go out there and be my best like I always do. I'll grind on him, I'll beat on him, and it's going to be an exciting fight.”